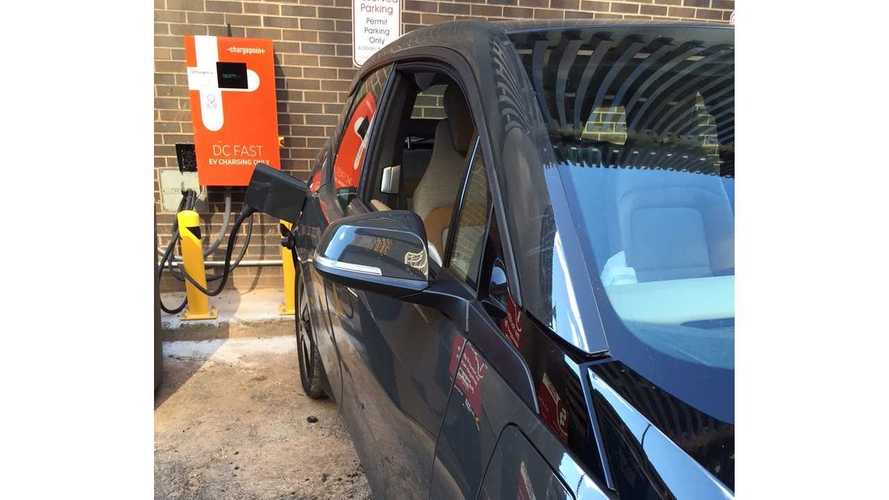 An i3 sits next to a 24kW DC Fast Charge unit during the announcement of the BMW, VW & ChargePoint joint venture earlier this year.

It's been seven months since BMW, along with Volkswagen and ChargePoint announced a joint venture which would install roughly 100 DC fast charge units on the East and West coasts. While there's been a lot of work identifying potential locations and negotiating with site managers, there hasn't really been any tangible progress that electric vehicle owners could see.

The plan is to create "Express Charging Corridors" on both coasts, with DC Fast Charge stations placed no more than 50 miles apart. The East Coast Corridor will connect Washington DC to Boston, Massachusetts and the West Coast Corridor would extend from San Diego, California to Portland, Oregon.

There would be two kinds of DC Fast Charge stations utilized. The stations placed directly on the highway locations of the corridors would be 50kW units, most of which will be dual head CCS & CHAdeMO stations. Then, on secondary locations slightly off the direct corridors, 24kW CCS-only units will be placed. While these 24kW units aren't necessarily quite fast enough to be convenient for long distance travel of hundreds of miles, they are very useful for intercity travel and charge at three to four times the speed of standard level 2 public charging.

I applied, and was recently approved under the program guidelines to have one of the 24kW units installed on my commercial property in Montclair New Jersey. I'm currently awaiting the permits to be approved and hope to have the station installed and working before my National Drive Electric Week event on September 12th.

Always the competitor, I was also hoping to be the first East Coast public location in the program to get a station installed, but I'm actually happy to report that won't be the case. That's because a friend of mine and fellow BMW i3 owner, Bruce Redman Becker has beaten me to it. Bruce, an architect and developer, is responsible for 777 Main Street in Hartford Connecticut, a newly developed 285 unit apartment building with a 250 car parking garage. In describing the location to me, Bruce had this to say:

"The site is just two blocks from exits off I-91 and off I-84. We have one SAE combo DC fast charger and 10 level 2 chargers (3 duals in the surface lot and 2 duals up the ramp within the covered garage). Power for all 11 Chargepoint chargers comes from a 400kw fuel cell adjacent to the chargers that also provides renewable clean energy to heat and power the apartment tower….We have three coffee shops on our block, including a Blue State Coffee on the first floor of 777 Main opening in September. And there are over a dozen great restaurants nearby as well as a great camera shop, CVS, banks and the Hartford Atheneum museum to enjoy while charging."

An i3 using the DC Fast Charger at 777 Main Street, Hartford Connecticut

So while none of the main corridor, 50kW units have been installed yet, it seems the secondary, 24kW stations are beginning to materialize here on the East Coast, which is welcome news.

I know some i3 owners have been frustrated by the seemingly lack of action with regards to the DC Fast Charge roll out, but I also know first hand that BMW and ChargePoint have been working very hard to locate potential locations, negotiate site agreements and collect bids for the installation. They've been at it for half a year now and I believe we're going to begin to see some real progress made in the next couple months. Getting the first one up and running can sometime seem like the biggest hurdle in programs like this. Well, now that that's done I'm optimistic that in the next six months we'll see dramatic progress made on both coasts.

Three 24kW DCFC units have been up and running at BMW Headquarters in Woodcliff Lake, NJ since January. They are open to the public and free to use.