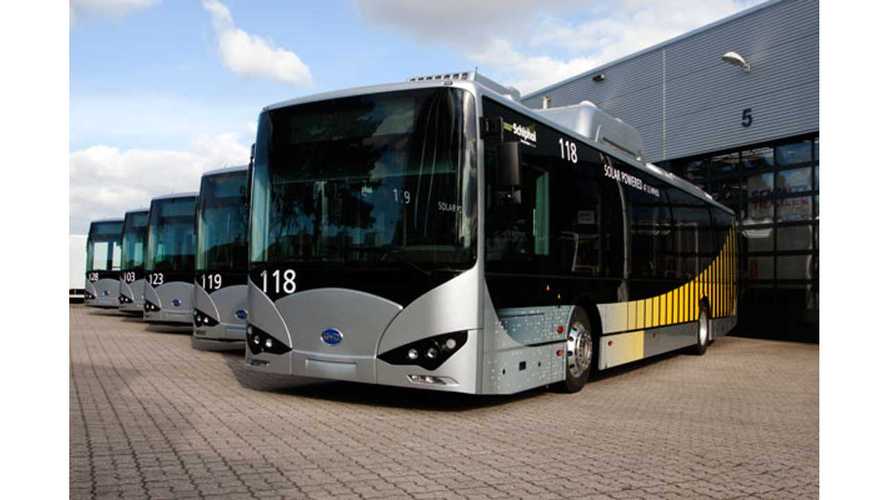 BYD released a video presenting its electric buses in service at the Amsterdam Schiphol Airport.

In total, 35 pure electric buses are being used to transport passengers between aircraft and terminals.

This was the largest EV bus order in Europe, which opened the doors for even larger ones like the most recent order in London.

We believe that the market for electric buses at airports around the world could be really significant and that the job is well suited for EVs.

"The 12m BYD ebuses are thought to be the first full size pure electric buses to provide transportation at a major world airport and are also the first in Europe to feature only two battery packs. The reduced number of battery packs, made possible by the application requirements of an airport, means more space for passengers and reduced overall weight – which itself means more efficient operation.

The Schiphol authorities chose BYD after a competitive European tender process. Extensive trials of the ebus have also taken place in 47 major European cities and have demonstrated that pure electric buses are fully viable, can usually perform a full day’s duties on a single charge and – due to the much lower cost of electricity compared to diesel fuel – deliver a strongly reduced Total Cost of Ownership."

“BYD is proud to be able to offer Schiphol a carbon-free solution for its airside passenger handling, something which is a major contributor to the airport’s aim of being a world leader in green transportation. The ability of airports to go green is really all about reducing emissions on the ground – and there is tremendous potential for us to assist in the process. When you consider that just one airline is likely to operate thousands of pieces of equipment with a diesel engine at each major airport you can see the scale of the opportunity”.