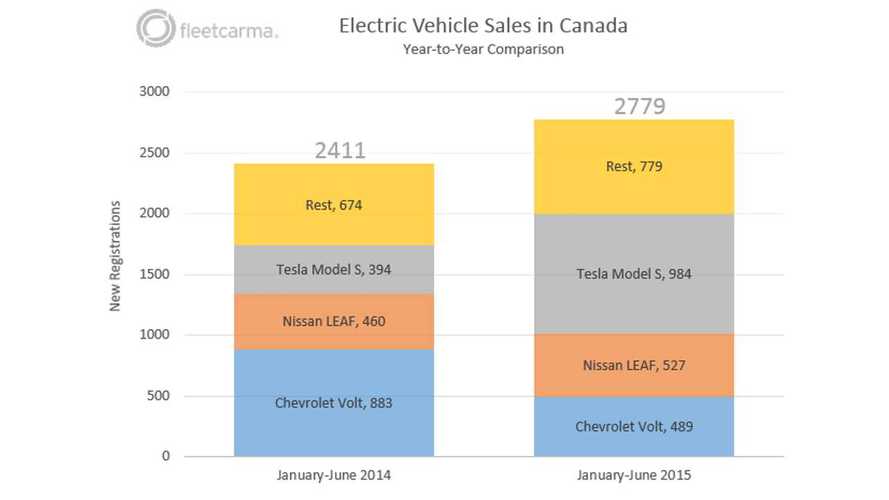 Despite sales of the most popular model, the Chevrolet Volt, dwindling down as buyers await the 2016 model, the Canadian market is growing in 2015 by some 15%.

On average, monthly sales stand at around 500.

"In total, there are 22 different plug-in models on the road in Canada, made by 12 different manufacturers.  More than you thought? Fair enough, over 10,000 of the 14,000+ vehicles are from 3 models: Chevrolet Volt, Nissan LEAF, Tesla Model S."

There are also interesting insights on which provinces are responsible for the most sales:

"Quebec continues to be the dominant province for plug-ins, with 45% of all plug-ins in Canada residing in La Belle Province.  19 out of every 20 plug-ins in Canada are in either Quebec, Ontario, or British Columbia.  Plug-ins have now been registered in every province or territory with the exception of Nunavut.  Nunavut has a few hybrids, so we expect some vehicle with a plug to land there shortly.

It is interesting to note the major difference between Quebec and BC in terms of BEVs vs. PHEVs.  Quebec is showing a strong preference for plug-in hybrids with nearly 60% of sales having a gas backup.  By contrast, BC has less than 30% of its plug-ins having a gas backup.  Visit Montreal and Vancouver in February and you will understand why."