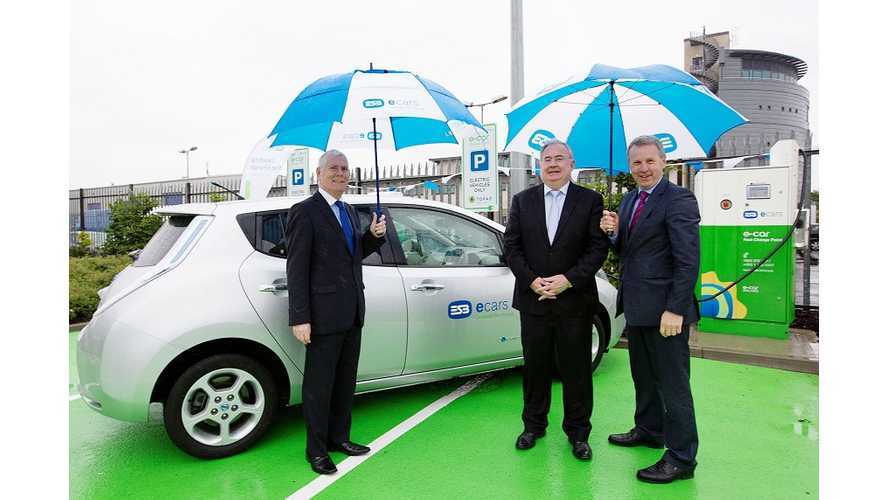 The ESB ecars program (state-owned Electricity Supply Board) in Ireland was set up to "lead the charge in rolling out electric car charging infrastructure to support the arrival of mainstream electric cars", which up until now was a network of free charging stations throughout the nation, helped in part by a lot of government support and also co-funded by the EU TEN-T to develop a cross-border network of rapid charge-points.

Despite only about 600 EV sales in Ireland this year, now that the ESB has built out a 800-unit strong charging network, it has decided that now is the time to leverage that position by announcing an aggressive subscription-based revenue program that ALSO includes additional usage charges for DC quick charging.

SEAI Tweets The 1,000th EV Sold In July- We Imagine It Was A LEAF As Almost 70% Of All Plug-Ins Sold In Ireland Are By Nissan

The main problems associated with the new plan are:

A) Ireland still has a very low adoption rate - just this summer the country celebrated hitting the "1,000 plug-ins on the road" mark

B) the new fee structure is "too fast, too soon, too much" in many people's opinion (comments below)

Details of the new plan, which begin with asking users to sign up to the new program this month, with charges starting in January are (via ESB):

The 800 stations (including 70 DC quick chargers) will remain free until April, but current users are more than a little miffed at the plan, and now the ESB says that they will have additional programs to disclose in January (that they can't talk about now - lest a non-existent, alternate charge network uses that information for unknown gains) to give driver's more usage choices.

“We’re in the business of having customers and we’re making plans to meet all their needs. This is only the first plan, and we’re only applying it to new customers from January. Existing customers will still have free access until April when the new plans will kick in for them. There will be other payment options, which we’ll be rolling out in January, and they’ll be designed to meet different needs. I can’t give any details on them yet, as it’s commercially sensitive information, but I can say that we want to make the network attractive and that we will be trying to accommodate both heavy users and those who use public charging points maybe only two or three times a year.”

Basically in our opinion, with a near monopoly in public EVSEs in place, ESB ecars has decided now to leverage that position of power into a much coveted subscription-based/fee program, and thus lock up the business into the future as more and more EVs arrive.

And if that sign-up doesn't go so well, with the blowback too strong, ESB can still bring out a new 'secret plan' (and more competitive pay as you go program) sometime in January to keep the current, but more importantly the future, EV owners using its machines.

Update:  A new/updated online FAQ seems to suggest it might be April when the new options are revealed, once the free us period expires.

"A product similar to this will also be one of the options that will be made available to all existing ecars customers from April 2016 onwards. At that time we will also be providing a significant service enhancement to customers and are working to develop additional packages. "

With only about 1,000 plug-ins on the road today in Ireland, it is obvious very little revenue/ROI would be netted under this plan, but a precedent would be set in the future.

Some public responses from a recent Facebook thread posted by ESB eCars online:

A monthly fee structure as proposed will incentivise inefficient use of the network as people attempt to get their value for money, blocking charge points unnecessarily. This will significantly slow the adoption of EVs in Ireland. A purely pay as you go system for both standard charge points and fast charge points will result in a much better use of existing infrastructure, and has a much greater support among the EV community in Ireland. Please consider it." - Conor Kelly"This Standing Charge is ridiculous. How many Petrol Stations charge people for using their forecourt. I will only pay for the electricity I use as ICE drivers only pay for the petrol/diesel that they use. With your pricing driving an ICE would actually be a better option for me. I have been recommending EVs to many - not anymore." - Shirley Murray"I'm for a PAYG system also. I've used the network on one occasion since buying a leaf in August this year. I don't expect to charge away from home more than 4 or 5 times per year and i won't pay a standing charge to do that. This ill thought out plan is a major disincentive for prospective e-car buyers and is a real kick in the teeth for people who are paying you already via their home chargers. PAYG is the only fair system with a bill pay system for frequent users to opt into."- Hilary Mc LoughlanCongrats to ESB ecars... I was deciding with the other half should we get the second EV car for the house and go completely EV... We just decided that we are now going completely ICE as ESB has proven how incompetent and thought less their business plan is regarding the network of chargers , how the price plan should be which is basically is "one plan fits all" ... So as I said, congrats on helping us decide.. ICE all the way!! ? ... New Audi A5 for me Jan 2016!" - Gerry GuthrieI think ESB want to kill electric vehicles. It's not in your interest to have EV's out there's. You make no money off us and have to support a charging network which costs you. We are basically a pain in the arse for you and you would rather we were gone so you could get back to the business of destroying our peat bogs, flooding our cities, killing our rivers and destroying the atmosphere. We don't expect free charging but at these prices it's more (way more) expensive than petrol. Still a civil service monopoly attitude underneath all the window dressing." - Ed English

To read dozens more similar responses, or to add your own voice, check out the ESB ecars Facebook thread ont he topic here, and on the "expanded FAQ" on the payment structure here.

You can also email your opinions to ESB ecars at ecars@esb.ie.