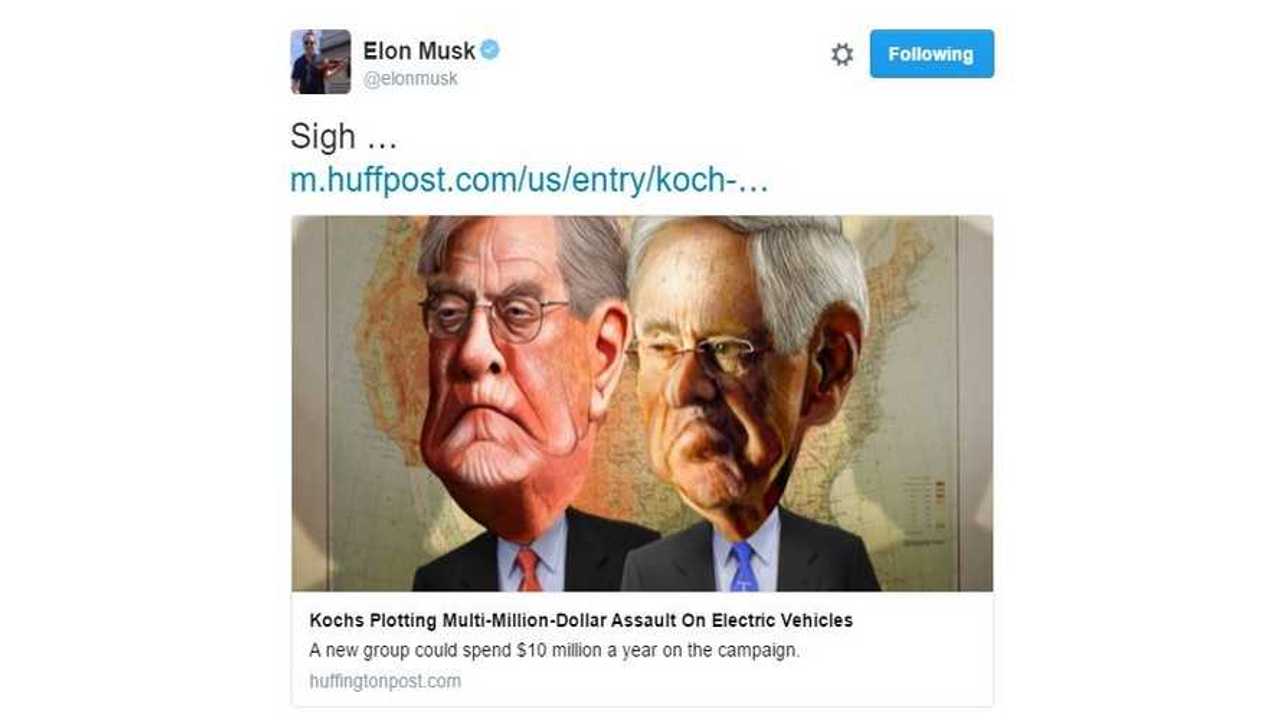 Charles and David Koch (aka The Koch Brothers) are making plans to fund a group that will promote fossil fuels and advocate against government subsidies for electric vehicles.

There are few details as to when the group will begin their pursuit, but the expectation is that the group will use media to push pro-petroleum messages, supported by research.

Koch Industries is the second-largest private corporation in the U.S. with annual revenues of $115 billion. The Kochs plan to spend $10 million dollars a year on this initiative.

The billionaire brothers have a history of supporting groups that have spent millions to fight alternative energy. The groups have attacked wind and solar projects and contested fossil fuel's role in global warming. An anonymous industry source explained:

“I think they (are) approaching all the major independent refiners. The group’s broad mission will be to make the public aware of all the benefits of petroleum-based transportation fuels. He added that, “the current administration has a bias toward phasing out these fuels."  He also said, "They’re (The Kochs) worried about state and community subsidies. In 20 years, electric vehicles could have a substantial foothold in the U.S. market.”

Charles and David Koch are building the group with James Mahoney and Charlie Drevna. Mahoney is on the company's board and Drevna is a lobbyist with prior experience in pro-petroleum initiatives. Last year, Mahoney and Drevna met with executives at Valero Energy and Tesoro Corp. to pitch the group. Mahoney went on to lead a seminar on "Changing the Energy Narrative”, that drew in energy company CEOs and other wealthy participants.

Sources are speculating that the Mahoney-Drevna group may be overlapping with other Koch-funded advocacy groups. One source said,  “The new organization may be doing work that’s now being done by the Institute for Energy Research." The IER has been promoting fossil fuels and attacking electric cars for years, but this new group plans to promote its message to a much larger audience through media.

Drevna was recently named a “distinguished senior fellow” at IER. Following his appointment to the board, a paper was released attacking Elon Musk's Tesla Motors.

Electric vehicles only account for 1 percent of the U.S. market, but that number is rising. It has been estimated that this will rise to 5 percent by 2025. Varun Sivaram, an energy and environment fellow at the Council on Foreign Relations pointed out:

This is why the Koch brothers and their supporters are concerned and are now taking action.

Elon Musk publicized his concern with the announcement via Twitter (his typical media for expression). He simply tweeted "Sigh  . . ." (and the retweets and comments immediately blew up)