Elon Musk: Not Out Of Question For Tesla To Be Larger Than GM, 500 Mile EVs Coming 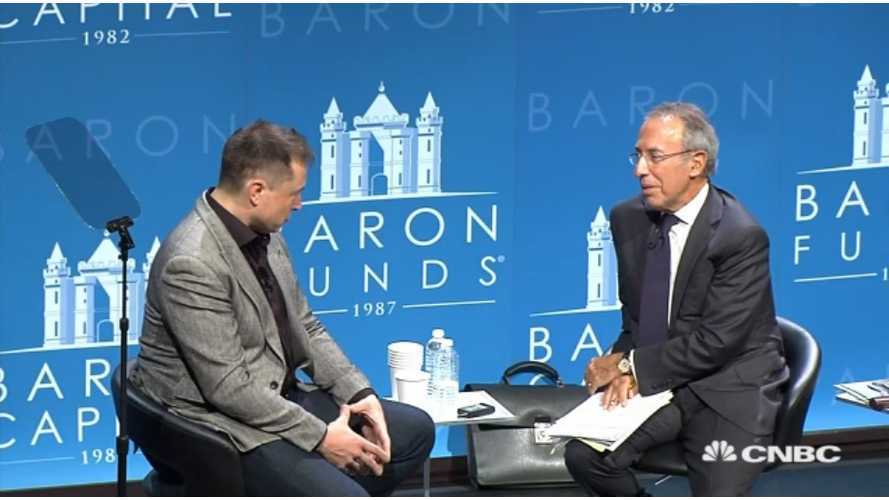 And as always, the Tesla front man did not disappoint - touching on everything from becoming an automotive giant to building millions of cars, and 500 mile EVs.

In total 4 CEOs made presentations, but none made a larger impact than Musk, who also brought along three Tesla vehicles with him.  The other presenters were William Stone (SS&C Technologies, Joel Marcus, (Alexandria Real Estate Equities) and Jay T. Flatley (Illumina).

The main talking points coming out of the conference via Musk we think you should know were:

Musk sees the day when Tesla will produce millions of EVs every year, a fact he says is significant given that not so many years ago when the company was on less solid footing, and he even thought Tesla"would almost certainly fail."

On becoming larger than the likes of GM, VW ... and Toyota:

"Possibly, it’s not out of the question," said Musk.

Depending on your definition of what is "larger" one could see that day coming shortly if the determining metric is market capitalization.

As of the close of business Friday, Tesla's market cap stood at $30.1 billion dollars, just over half the size of General Motors (55.6 B) and Volkswagen (53.5B).  Toyota, with a valuation close to $200 billion, seems like a bridge to far to cross via just expectations for the brand - perhaps when that day comes that Tesla does indeed produce 500,000 cars a year.

Taken by actual vehicles produced - passing the "big 3" will take much, much longer as the 50,000-52,000 the company expects to deliver in 2015 would put them about 9 million vehicles behind their largest competitors.  Mr. Musk says they will need a lot more building infrastructure in the future..

"I think over time if we continue to, if we build great products and we keep our cost structure competitive, (Tesla will need) many plants...in fact, many auto plants and many gigafactories, I think, are needed."

Part of the focus of Musk's talk was on the fundamental building block of electric vehicle technology - the battery.  Specifically the need to continue to increase the efficiency of the battery, while reducing costs at the same time.

The Tesla CEO reiterated a popular talking point, saying that Tesla could build a 500 mile vehicle today, but that the compromises are still too great to make it viable.  A more reasonable timeline for 500 milers would be in about a decade.

Of interest: Baron's who held the conference, is a long time stakeholder in Tesla - first buying a position in October of 2012 (at $33.11).  Today, Baron's stake totals 1.3 million shares, worth about $300 million dollars.

The billionaire CEO of the group, Ron Baron told Musk that they "we're investing in you," using the backdrop of VW's diesel scandal to validate Tesla's position in the market today - and in the future.

Baron separately told CNBC what he expects the future market cap to hold for Tesla.

"Five hundred thousand cars a year in 2020 ... that's a business of $35 billion or $40 billion a year in revenue. Say they make $6 billion of operating profit before they spend to make themselves grow larger. That means that's probably worth $120 billion (market cap). Now market value is about $30 billion, so it's quadruple in five years."