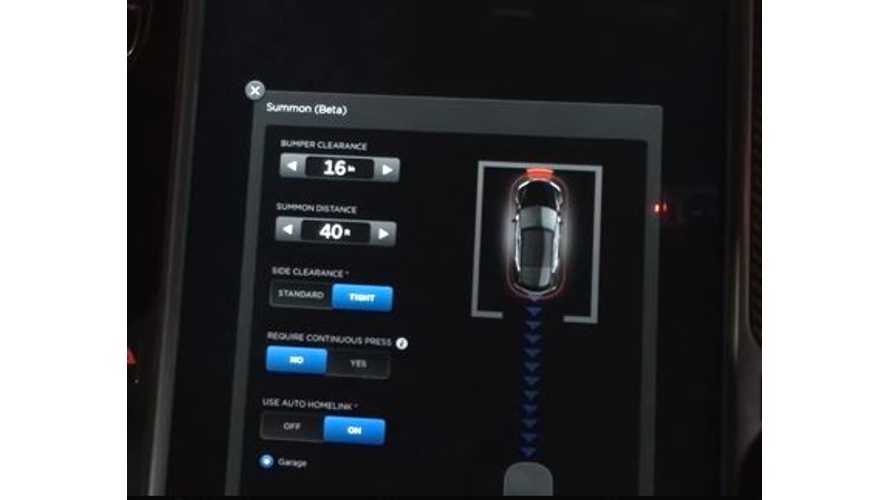 Here's a look at the release notes for the update (Version 7.1 2.12.22), with a video on the subject published by YouTuber Mark Schey above:

With this release, Summon has been enhanced with a new activation mode and additional customization options to make the feature easier to adjust to your parking situation. You can access these additional settings by tapping the CUSTOMIZE button in Controls > Settings > Driver Assistance > AUTOPARK.

You can now specify how Summon operates whenever it parks or retrieves your vehicle:

Summon has a new mode that requires you to press and hold a button in the Tesla mobile app to operate the feature. This mode is enabled by default.

You can disable this mode by selecting NO for the REQUIRE CONTINUOUS PRESS setting. When you do so, more convenient ways to park and retrieve your vehicle become available:

Automatically initiate Autopark after you exit the vehicle: Simply double-press the Park button on the end of the gear selector and a pop-up will appear on the touchscreen that displays the direction Model S will move after you exit the vehicle. You can change the direction Model S will travel by tapping the other arrow. Press the CANCEL button on the pop-up to cancel Autopark.

Autopark or retrieve Model S with a single tap of the button in the Tesla mobile app.

These Summon enhancements require the use of an updated Tesla mobile app, available soon for iOS (v2.7.2) and Android (v2.7.3).

With this software update, Summon has been turned off for those customers who have previously enabled it. Since the operation of Summon is changing with this release, you must review the informational pop-up before using Summon.

Model S may not detect certain obstacles, including those that are very narrow (e.g., bikes), lower than the fascia, or hanging from the ceiling. As such, Summon requires that you continually monitor your vehicle’s movement and surroundings while it is in progress, and that you remain prepared to stop the vehicle at any time using the Tesla mobile app, by pressing any button on the key fob, or by pressing any Model S door handle.

Regenerative braking at low temperatures has been improved.

The Creep setting is now saved to Driver Profiles.

We bolded one section above that was applied by Tesla in response to Consumer Reports' finding that Summon Mode could potentially be dangerous.

Almost immediately upon release of this software update, a video overview (see above) of the latest Summon features appeared on YouTube with this video description:

"Overview of the latest Summon Features in 7.1 (2.12.22). My favorite new feature is the ability to double-click the park button and simply get out of the car to automatically park the car in your garage. No keyfob or app required. It just works. I also demonstrate how you can adjust the "Summon Distance" if you want the car to stop before the default of 39 feet. This is great for shorter driveways. I also address the concerns (based on what was said by Consumer Reports) about requiring a button in the app to be held down the entire time a Summon is in progress. Enjoy!"