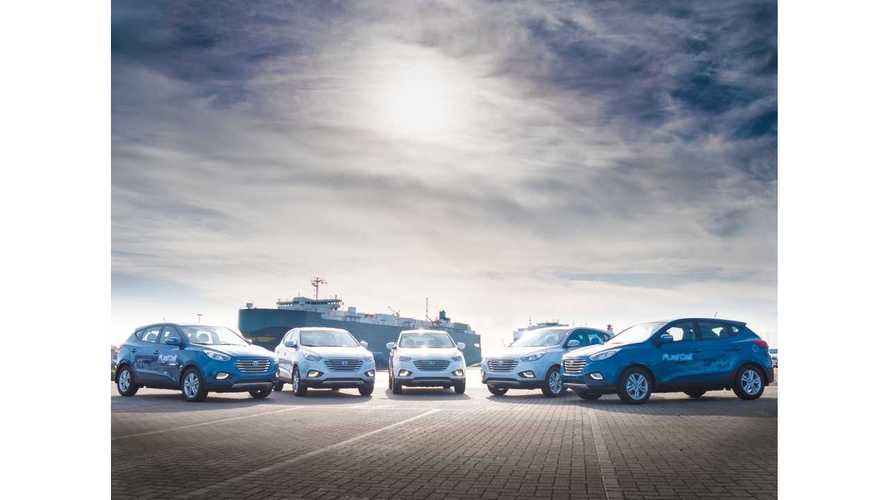 Hyundai announced its largest-ever shipment of 50 ix35 Fuel Cell vehicles to Europe in October, increasing its total number of hydrogen fuel cell cars in Europe to over 250.

At the same time, Hyundai assured us of its leadership in the fuel cell vehicle roll-out, as with over 250 cars Hyundai has more on the road than every other manufacturer combined.

On the other hand, plug-in electric cars only in 2015 will far exceed 150,000 sales in Europe. We believe that Europe has an order of magnitude more all-electric cars from 10 or so years ago during the pre-lithium-ion era.

Hyundai strongly believes in hydrogen fuel cell cars and offers ix35 Fuel Cell to both private and corporate customers in 11 countries in Europe. By the end of the year, two more - Spain and Switzerland - will be included for a total of 13. Total mileage of the fleet is more than 1.2 million kilometres (about 746,000 miles) - on average around 6,000 km or 3,700 miles per each of the 200 units.

"With the refuelling infrastructure in Europe continuing to grow, Hyundai will further expand its Fuel Cell distribution network. Hyundai Motor is the first manufacturer to train and equip its dealership staff across Europe in the servicing and repair of Fuel Cell Electric Vehicles, to ensure a consistent level of highly informed, high quality customer service."

“This latest landmark delivery enhances our leading position in the roll-out of fuel cell vehicles in Europe. With our fuel cell distribution network growing to 13 European countries, we are enhancing our sales and customer service capabilities, making fuel cell electric vehicles more accessible for customers throughout Europe.”