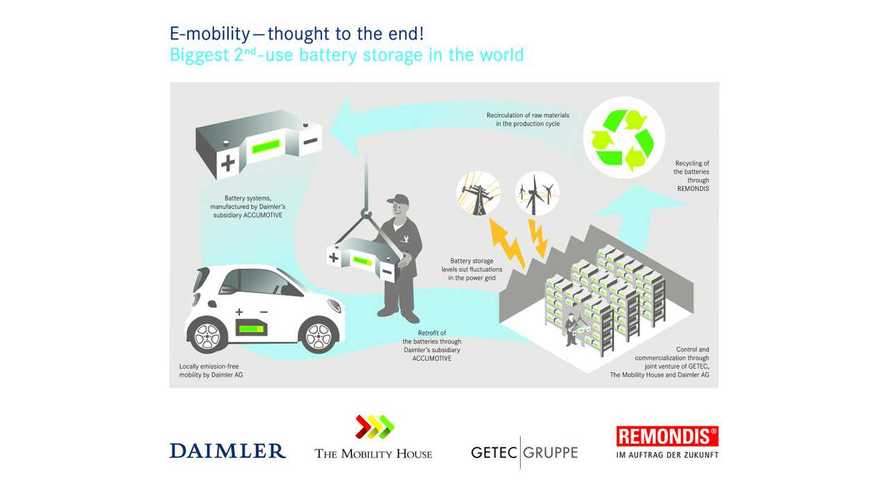 Daimler, in cooperation with The Mobility House, GETEC and REMONDIS, will launch the world's largest 2nd-use battery storage unit in Lünen, Germany.

The 13-megawatt energy storage system ESS will be connected to the grid in early 2016.

For the purpose of the project Daimler used lithium-ion batteries from the second generation smart ED (Tesla packs).

"The world's largest 2nd-use battery storage unit will soon go into operation in the Westphalian town of Lünen. A joint venture between Daimler AG, The Mobility House AG and GETEC, it will be operated from the beginning of next year at the site of REMONDIS SE and marketed in the German electricity balancing sector. A special feature of this venture is the use of second-life battery systems from electric vehicles. In Lünen, systems from the second generation of smart electric drive vehicles are being incorporated into a stationary storage unit with a total capacity of 13 MWh. The process demonstrably improves the environmental performance of electric vehicles, thereby helping to make e-mobility more economically efficient."

"With their 2nd-use battery storage project in Lünen, the four partners are proving that the lifecycle of a plug-in or electric vehicle battery does not end after its automotive application. Depending on the model, Daimler AG guarantees its electric vehicle customers a battery life of up to ten years*. However, the battery systems are still fully operational after this point, as the low levels of power loss are only of minor importance when used in stationary storage. It is estimated that the unit can operate efficiently in a stationary application for at least another ten years.