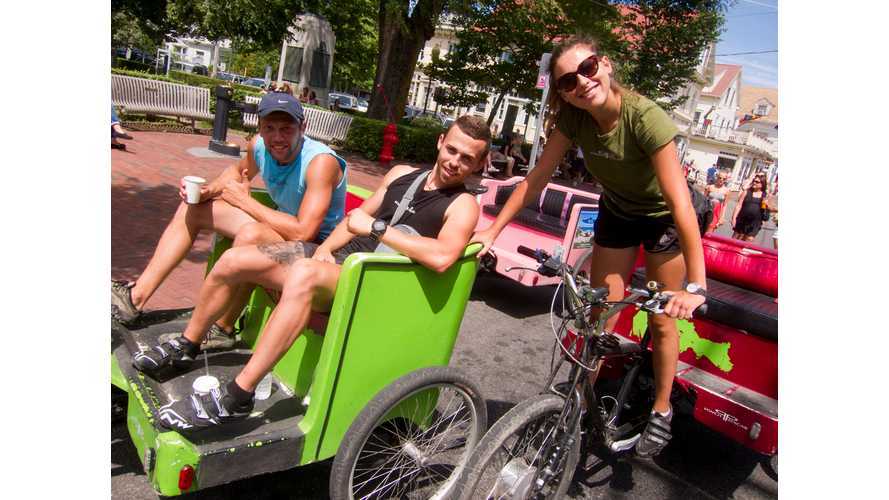 Not an hour and a half's boatride from Boston, or an interminably long drive out the length of Cape Cod brings you to a particular slice of idyllic Summer heaven called Provincetown - "PTown", actually.  And can we go on vacation?  Sure, up until we hear a familiar whizzing sound as a pedicab loaded with tourist-types goes by at a slightly higher speed than what you'd guess that 110lb twenty-something young woman could be pedaling.  Sure enough, what looks like a 500W hub motor is hanging off the front wheel...  and we had to start asking questions.

Bruce VanAllen at the office

Say hello to Bruce VanAllen - a proprietor, chief-cook-and-bottle-washer and one owner of PTown Pedicabs, based right outside of the Commercial Street center of Provincetown.

Bruce and friend, Randy McDonald, founded the company about 13 years ago, and 12 years ago decided that they needed some help for their 200lb pedicabs climbing the sand dune hills of the outer Cape, especially in light of the fact the kids they attract to power these rigs were often young students sometimes tilting the scales at under 110lbs.  They looked around and found the Heinzmann 500W, 36V hub motor from a company in the midwest, started stringing them on their front wheels, and never looked back.  Randy passed the baton to Charlie Hamilton, a driver turned owner, in 2007.

Pedicabs on the prowl

The pedicabs are a product sold by Main Street Pedicabs, and have some modifications specific to the conditions in Provincetown.

Their battery system is a sealed-lead-acid, 36V 5aH pack, much like what you'd see on a scooter, which will give them about 12-15 miles on a charge with normal pedaling effort.  They've used lithium in the past, but for their use they were far too expensive and complex, plus, the added weight and space for this vehicle wasn't a problem.  Their charging system uses small "wall-wart" chargers, and in a normal 6 to 8 hour shift they'll go through two or three packs.

VanAllen said that back 12 years ago, the Heinzmann motor/controller combination was all he could find, that could deliver the performance he needed.  And yes, he was the first, and still one of the only - possibly the only electric assist pedicab running in the US, and possibly the world.  (We'll throw ourselves on the resources of our knowledgeable readers to validate that, but we've not found anything like this. )

The drivers generally rely on the assist, but are keen to point out that it's just an assist - considering the 500W pulling power and the fact that they're often pulling nearly 1000lbs of bike and tourist around, there's still a fair amount of muscle power going in to the equation.  Then, of course, there's Angela - who'll tell you (with a sly grin) that unlike the boys, she doesn't need the motors at all.  Then, of course, there's the quaint local custom called "Bear Week".  Everybody uses their motors during Bear Week.

All the drivers go through a "driver training" session, where they learn how to control the throttle while handing the shifting, learn that the cabs turn by steering, not leaning, as with a standard bicycle, and the cabs go through a brake and drivetrain safety check every morning before the shifts start.

Angela, showin' up the boyz

There is, as you'd expect, a great deal of bravado and camaraderie amongst the riders, and, interestingly, this holds them to an honor system of pay as well.  The pedicabs are a "pay what you feel it's worth" structure for passengers, and for the drivers, they pay the company a share of what they earn, based solely on trust.   As far as being held to a standard, Bruce says when the team notices that any particular driver doesn't come up with what seems like a full share for a shift, people talk.  As Bruce says, "Karma's a bitch".

The town has embraced the cabs from the beginning as a tourist pull and a revenue source, but also as a strategy to keep car traffic down, particularly in the pedestrian-heavy areas around the gallery and restaurant districts.  The Cape Cod National Seashore, an immense tract of land set aside as a National Park by the JFK administration, gave them some trouble in getting permission to navigate the narrow bike trails, as well as operate a powered vehicle, but after a few years of persistence some permissions were granted.  Beyond that, however, VanAllen and the drivers try to get their fares out to places and sights that they normally wouldn't be able, or know, to see.  VanAllen's love of the outer Cape is infectious - and possibly the biggest driving force behind the company.

They run two shifts - Noon to about 6, and 6PM to 2 or 3AM, have 8 cabs running and will cover anywhere up to about 500 miles in a shift.  Most passengers are too busy checking out the sights to notice the electric assist, but if they do start asking about it, most of the tech-savvier drivers will go into the details, but stressing the "assist" so as not to cut into their compensation too much...

...your ride is waiting