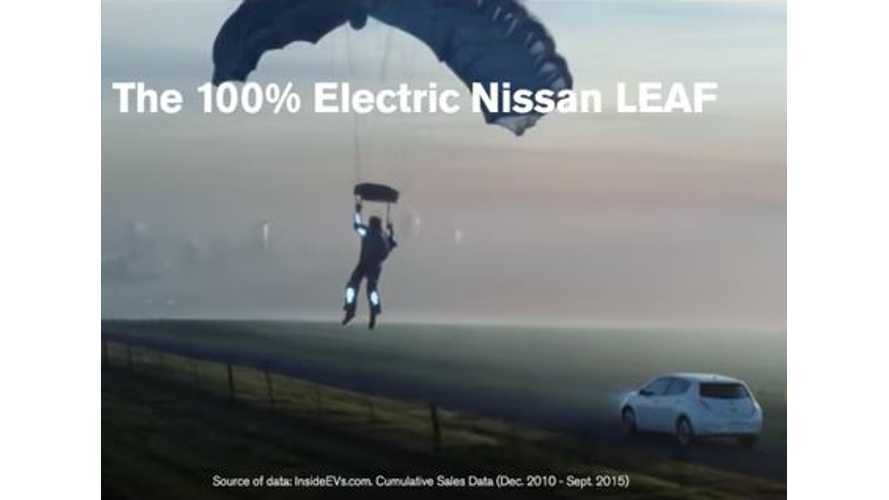 Nissan released a new ad of the 2016 LEAF with class-leading 107 miles of EPA range, as U.S. sales begins.

"Three friends take their Nissan LEAF on an epic nighttime journey out of the city, through a forest and into the mountains, where they find the most awe-inspiring electric spectacle."

There's  reference to sales of the previous 2011-2015 versions, which in the U.S. were the highest among all other plug-ins (all-electric or plug-in hybrid).

Through the end of September, Nissan sold 85,952 LEAF in the U.S. and, hopefully after a weaker 2015, sales will rebound to new highs, thanks to the longer-range 30-kWh version.

For us, it's an honor to be mentioned as the source of sales data in the LEAF ad spot.

Full/all-time sales data for the LEAF (and all other major EVs) can be found on our monthly plug-in sales scorecard.  Of note: 87,190 LEAFs have been sold through October - which is 2,534 units ahead of Chevrolet Volt with 84,656 sales for the overall "plug-in" sales lead in America.

Nissan LEAF sales in US - September 2015

Disclaimer:  InsideEVs was not paid any consultation fee surrounding this spot or others using our data, and InsideEVs has no direct advertising relationship with Nissan (or other EV manufacturer)