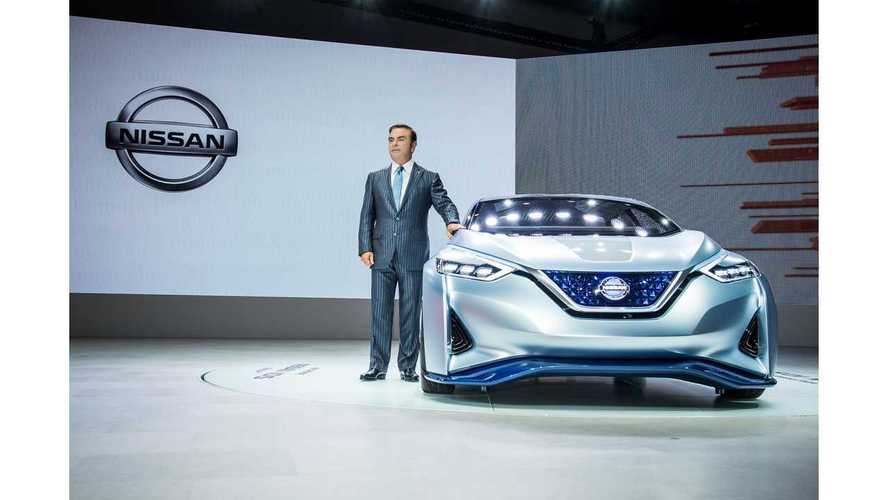 Renault-Nissan Alliance CEO Carlos Ghosn published a post discussing the importance of the United Nation’s COP21 climate conference in Paris, which is supported by Alliance EVs.

Ghosn hopes for a new, broad global agreement on the climate change, strongly believing that we should deal with environment impact.

As an example for the automotive industry, Ghosn shows 800 million vehicles on the world's roads, which will grow to more than 2 billion by 2050, according to expectations.

"We cannot continue to rely only on fossil fuels to power those vehicles and supply the bulk of our energy if we are going to avoid the worst effects of climate change."

The truth is that not all agree on climate change, or on the humans' role in climate change, and we must remember that using new solutions to be more environment friendly will cost us more (otherwise everybody would use them already). This is the main topic of balancing costs and environment impact.

In one of other conferences, Ghosn said clearly that some people are asking about profitability of electric cars after the automaker's $5 billion investment, while sales are still small (relative to sales of all cars), his answer is that the automaker can afford the investment because overall the company is profitable, which shuts the mouths of some shareholders. If company had bad luck with earnings, the question of whether it should continue to make electric cars would be back on the table - "it's not easy".

As in the case of the Renault-Nissan Alliance, all companies, and countries have similar problems - what can we do to have cleaner world, and how do we make that transition without harming the economy?

In his latest LinkedIn Influencer post, Renault-Nissan Alliance CEO Carlos Ghosn says the world can achieve a smooth transition to a low-carbon economy if negotiators work out a strong global agreement to combat climate change at the upcoming COP21 climate change conference in Paris. He argues that a binding agreement, properly structured, could unleash growth and a major wave of innovation."

"Representatives of the world's nations will gather in Paris soon to set a course that could determine if we avoid the worst potential effects of global climate change.

If successful, the 2015 Paris Climate Conference, also known as COP21, will result in a new, legally binding global agreement to combat climate change, charting a course toward a low-carbon, green economy powered by renewable energy.

The government policymakers, diplomats and elected officials who will gather in Paris in early December know the consequences of doing nothing will be dire, including more floods, intense heat waves, droughts, hurricanes and tornadoes. They know climate change does not respect borders. It affects every country.

The goal is to limit global average warming to no more than 2 degrees Celsius increase by the end of the century; the challenge is how to do that. Reaching a global, binding agreement will not be easy, but the business community recognizes the need for an orderly, predictable and planned transition.

The country-by-country commitments that will comprise the Paris agreement, by themselves, will not be enough to reduce greenhouse gas emissions to a level that limits global warming. The support of the business community is mandatory.

And let's be clear: The transition to a low-carbon economy will occur one way or another. It will either be an orderly transition over the next two to three decades, or a disorderly one, spurred by crises and human hardship. Further delay in taking global action will only ensure the latter.

An orderly transition is one that occurs within the existing financial and economic system. It does not threaten or overwhelm the foundation of our market economy. It does not require aggressive government intervention and centralized demand and control.

An orderly transition provides an opportunity to create many winners, because adaptive and innovative companies will flourish. If corporations, the markets and entrepreneurs have a clear signal that an orderly transition to a low-carbon, green economy is more certain, through an ambitious global climate agreement, the needed investments and innovations will occur.

At the latest G7 meeting in Bavaria, world leaders took a step towards setting this direction by pledging to phase out fossil fuel emissions by the end of this century. This also made it clear to corporations and the markets that low-carbon technologies hold the promise of being profitable long-term investments.

Many business leaders have already recognized the commercial and economic benefits of taking action now on climate change. In the auto industry, for example, there has been considerable innovation and investment in zero-emission vehicles, though more is needed.

Today there are about 800 million vehicles on the world's roads. By 2050, it's estimated there will be more than 2 billion. We cannot continue to rely only on fossil fuels to power those vehicles and supply the bulk of our energy if we are going to avoid the worst effects of climate change.

The Renault-Nissan Alliance is the first automaker to offer a full range of electric vehicles. We recently sold our 250,000th EV, and today more than half the EVs on the road globally were produced by the Alliance. The photo at the top of this page is of Nissan's IDS Concept that was unveiled at the recent Tokyo Motor Show, and features the latest advances in EV and autonomous drive technology.

At the COP21 conference, the Alliance will have the largest fleet of zero-emission cars ever assembled for an international conference (read more here).

While I'm proud of our EV leadership, I know it's not nearly enough. Zero-emissions vehicles remain a tiny fraction of the overall vehicle market.

Other automakers are now joining us with new EVs, plug-in hybrids and fuel-cell electric cars, which are helping to expand the market for zero- and low-emission vehicles. When there are more players there's more competition, and competition stimulates demand.

Many governments around the world are helping stimulate demand for EVs with various incentives, from cash for trading in old, polluting cars, to free parking and EV access to bus and high-occupancy lanes. We are also working daily with governments and businesses to expand the charging infrastructure that's necessary if EVs are to go mainstream. In places where such investments have taken place, such as Norway and the U.S. city of Atlanta, customers have reacted positively and sales have grown rapidly.

By investing in green innovation, companies can create value for their future while playing a major role in fighting the threat climate change poses. In fact, according to the latest New Climate Economy Report, produced by the Global Commission on the Economy and Climate, the global market for low-carbon and environmental goods and services is worth more than $5.5 trillion.

This kind of investment will continue to grow. It has already helped many businesses create competitive advantages, build stability, and better position themselves for future challenges.

The U.N. Secretary General recently said that we are the first generation to feel the effects of climate change and the last to be able to do anything to stop it. This is a call to action, and I urge the world's governments to meet that challenge this year.

Many corporations already have taken action on climate change because we recognize the consequences of not doing so. But we also appreciate the economic benefits such investments generate, including new innovations and opportunities for growth.

A global climate agreement, properly structured, could unleash growth and a major wave of innovation globally. The Paris Climate Conference can serve as a significant milestone on the road towards decarbonization, which will spur growth and jobs.

I look forward to all the countries of the world making strong commitments to climate action in the months ahead.

(Versions of this essay originally appeared Oct. 23 in the Yomiuri Shimbun in Japan and Oct. 29 in The Japan News)"