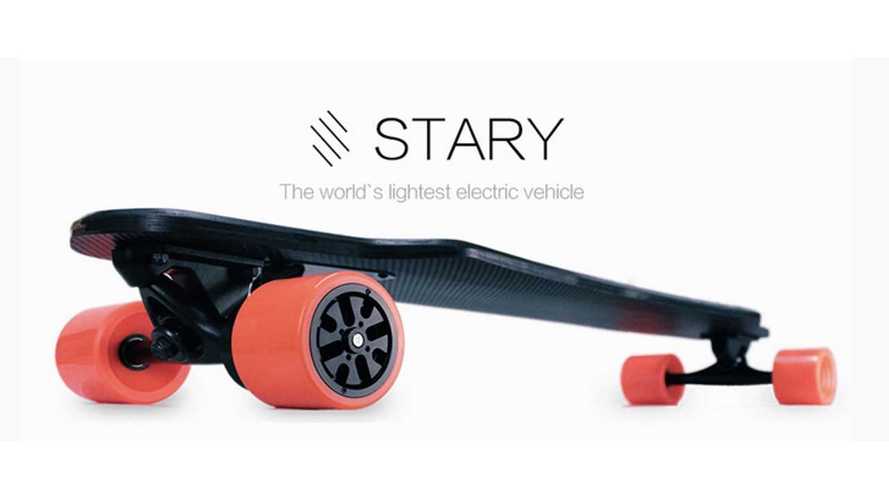 We'll be the first to admit we treat superlative-claiming EV Kickstarter projects with some heavy skepticism, but on occasion, we run into projects (and by "projects", we mean products for startup companies) that actually seem like they have a swinging shot at meeting their astounding claims.  Stary is one of them.  Bear with us, here are the specs:

Main Function   Of course, the first question is where are the batteries?  Here they are, in the bamboo, maple and carbon deck.

Who doesn't love a bamboo, maple and carbon deck?

Not a ton of batteries, granted, but considering the natural pouch-cell construction of a lithium pack, well, sandwiching them into a deck is elegantly simple. They're claiming a 10 mile range - and based on silly scooter specs, that seems legit.  Next, the motor?  Here you go:

The motors are geared, in-wheel affairs, running the two rear wheels.  They're claiming 1350W, so 675W per wheel, which is probably an exaggeration, however, would account for the claimed ability to climb a 30º grade, if they're actually good for that kind of power.  It's all controlled by a hand-held remote, and has regen braking - not so much for the regenerative benefits, but mostly for the control.

We'll let time be the judge of whether these guys can produce this thing, and what the specs will ultimately be, but our Kickstarter radar calls it as a sincere, viable effort.  Besides getting over 7 times their goal, "they" represent a fairly large team of young engineers who seem to at least know how to present themselves, have the manufacturing capability to pull off these mighty little motors, and, above all, are responsive and forthcoming in their response to over 1000 comments.  Whether they will do it or not, it would appear they're giving it a real shot.