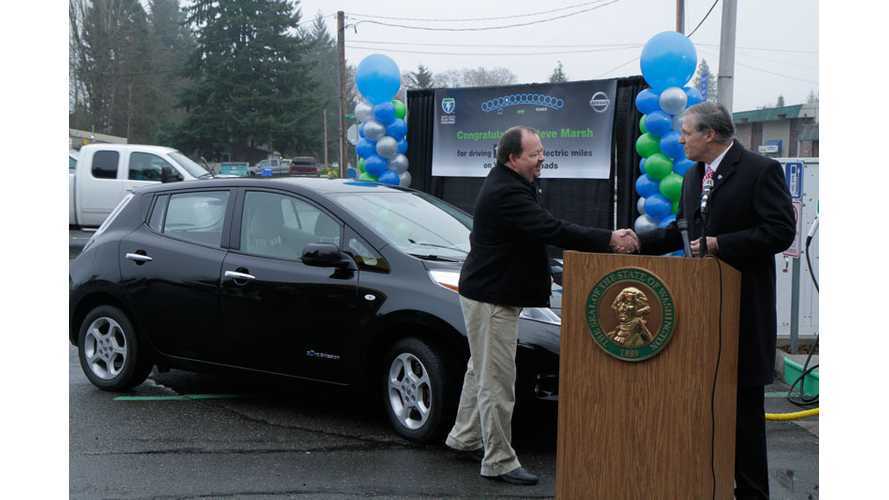 This is probably still the highest mileage LEAF in the US, though because of its fading range, Steve needs to charge midway to his job, charge to full at his job, and then return home while stopping again midway for a charge.

This is the reason why he switched to a new 2014 LEAF and is using the older 2011 in less demanding summer time (no heat needed) situations.

Here is an update and answers to some questions posted on MyNissanLEAF forum by Steve:

It has been some time since I've posted an update.My mileage rate/month has dropped as I'm splitting my driving across another LEAF. Today was a perfect example - rather suddenly this morning, I realized I didn't plug in the '11 last night. So I plugged in the '14 and because of the faster charger in the newer models, I was able to head out after a much shorter charge time and make it to work without stopping.As we go along, things seem to be getting better and better in the world of Nissan EV. If the purported higher capacity battery packs are interchangeable, Nissan has followed through on everything I hoped for when I started this journey more than 4 years ago. The multiple model levels introduced in the last couple of years have made the car more attractive to me.I am currently charging midway at least once each direction of my commute. The recent GID drop supports my impression that it is getting harder to go this distance. There will come a time when I say enough is enough and I don't want to try and make the old battery continue to work for this commute. I anticipate that to be somewhere around 150,000 miles. It will continue to be a great errand runner.I have noticed that when put in ECO mode, the REGEN is now next to nothing and no longer slows the car significantly.Everything about the car has been terrific - brakes are still on their first set, Tires are on second set with lots of tread left. Still no need for a wheel alignment and holds straight. No other mechanical issues beyond the power window switch a couple of years ago. Is there any other car model out there that can go this kind of distance with such little maintenance?Thanks again for everyone's support and encouragement. Steve"

"Hi All - yes, I am driving the 2011 as much as possible to keep the miles off the 2014. When I bought the car, my plan was to save as much as I spent. That doesn't look feasible without replacing the battery and going another 150,000 and even then it would be close. No matter how many miles I put on it, the KBB value isn't likely to fall much further now. I am being stubborn, sometimes spending an extra hour going each way. I would like to get to 150,000 miles before the colder, wetter weather arrives.

I am hopeful the new 30Kwh will fit in the 2011. In the Arizona meeting a couple of years ago, there was a discussion about different battery capacities. Most agreed that it would be wise to stick to one flavor. Mr. Palmer is gone now so I don't know if that will mean anything. Going to 30kwh will allow me more miles before I reach this battery capacity.

On the lack of regen, I wonder if it is related to the strongly pulsating brakes when battery is LBW or below and brakes are applied lightly. This may become a safety issue that could result in a mandatory fix? Would that have to be a new battery? Idle speculation.

Just trying to hang in there until new batteries are "announced" and there is clarity on replacement option."