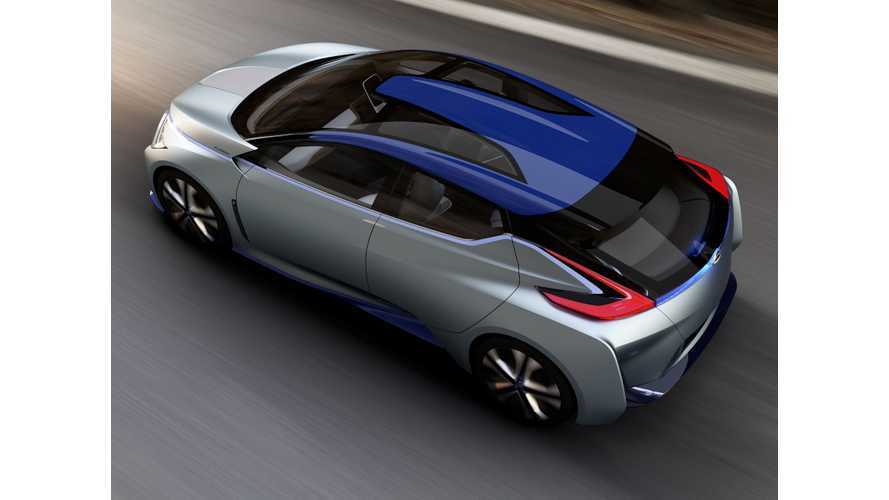 Ahead of the Nissan IDS Concept's debuted this past Wednesday (IDS details, photos/video here), a small group of journalists were admitted to Nissan's Advanced Technology Center in Atsugi, Japan to learn in great detail about the concept car, and the future of the tech.

Bertel Schmitt, who co-founded the Daily Kanban (a must read for an insider's view of the automotive industry), and who also happens to be a local in the area was invited as part of this group and says:

"Of course, nobody in his right mind allows journalists into a high-security tech center for a day, just to show off a silly concept car, and it quickly became clear that what we saw was the future Nissan LEAF in drag. It is a fair guess that large parts of the IDS Concept will be seen again when the 2nd generation Leaf arrives"

After attending Mr. Schmitt came away with several logical conclusion and some insight into the next generation LEAF.

Most notable was a look at the 60 kWh battery inside the IDS Concept, which perhaps not surprisingly, fits near exactly into the same package (length/width anyway) as today's 30 kWh Nissan LEAF battery pack - surely not a measure Nissan would go to in order to make a simple concept.

As expected, the battery chemistry itself is the long-anticipated NMC (Nickel-Mangan-Cobalt) chemistry on the cathode side, with a graphite anode. The new 60 kWh battery is comprised of 288 cells.

While some of the slides shown at the presentation looked to feature what the new 2016 Nissan LEAF can do (280 km on the JC08 standard in Japan/107 miles on the US EPA), the charts also demonstrated that "the future" could do in excess of 500 km/310 miles (again JC08), which would mean at least 200 miles or more of real world/EPA driving.

Much like the capacity (and a revised chemistry) in the new 30 kWh battery (2016 LEAF)  over the existing 24 kWh pack, jumping to a 60 kWh battery with new NMC tech allows for even greater recharging times.

It appears "the future" (aka next gen LEAF) will accept CHAdeMO charging at 100 kW, which will enable adding 100km/62 miles (JC08) of additional range in about 7 mins of charge time.

As for the supplier of the battery, no one at the event was telling.  However, as they say - loose lips can sink ships:

Mr. Schmitt explains, "While I was working the Renault/Nissan Alliance dinner on Tueday night, a leading Alliance engineer told me that the battery will be built “by us and LG Chem.” Then, two alarmed handlers stopped the discussion."

This would indicate that the tie-up between LG Chem and Nissan has been finalized, and as expected both company's will be producing the same battery for the LEAF.

Our own suspicions since word of a joint battery agreement between the two companies surfaced, has been that LG Chem will fill production needs for Nissan outside of the United States and Japan for the next generation, long range LEAF.

Other bits of knowledge gleaned:

*- IDS Concept has 100 percent carbon fiber (CFRP) body, expect the next LEAF to "have at least a few significant elements made from CFRP, probably from the tub upwards, including the roof"

Daily Kanban, Our thanks to Bertel Schmitt for the in-depth reporting!