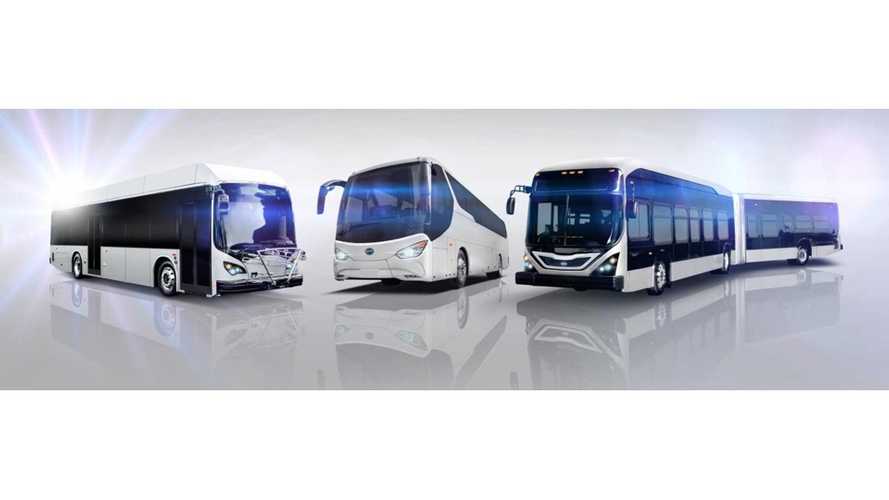 Antelope Valley Transit Authority announced a goal to become the nation's first 100% electric bus fleet by 2018. AVTA services 450,000 residents in the cities of Lancaster and Palmdale, as well as the unincorporated portions of northern Los Angeles County.

We should note that two years ago AVTA was first that received BYD electric buses.

The company has signed a historic contract with BYD for up to 85 vehicles, which will be delivered over five years (we assume that only first part of this contract will be enough to make the fleet 100% EV in 2018).

"During a special meeting today, the AVTA board of directors voted to award BYD a contract to manufacture up to 85 electric buses over a five year period. The historic announcement was made during a special event that followed the meeting at the AVTA facility and was attended by elected officials, dignitaries and community leaders. Los Angeles-based BYD Motors, a global leader in developing electric transportation, will build the up to 85 buses for AVTA at its manufacturing facility in Lancaster, California."

The first batch of 29 buses are to be delivered within 12 months, while AVTA now works to secure grant funding from the Air Resources Board for another 17 buses (46 total).

According to press release "AVTA is also installing a wireless charging system to extend the fleet’s range to ensure the electric buses will be able to serve the agency’s longest rural routes."

"AVTA is anticipating a cost savings as a result of electrifying its fleet. Over the lifetime of the new electric bus fleet, the transit agency forecasts it could save more than $46 million compared to an all-diesel bus fleet, equivalent to $46,000 per bus per year in savings. And, by reducing dependence on foreign oil imports, AVTA will no longer be subject to oil price volatility for its bus fleet. This will help create greater stability for budget forecasting for the fleet manager – an important factor for a public agency."

"Additional benefits AVTA will see as a result of electrifying its entire fleet include:

• Noise Pollution Reduction: noise pollution will be reduced by 50 percent, making it a more pleasant ride for bus operators and transit passengers.

• Safer Work Environment for Technicians: The electric batteries are safe, thermal runaway proof, non-toxic, and maintenance free. There are no diesel or diesel emission fluids needed for bus maintenance, providing a safer and healthier working environment for vehicle technicians.

AVTA provides local, commuter and dial-a-ride service to a population of more than 450,000 residents in the cities of Lancaster and Palmdale as well as the unincorporated portions of northern Los Angeles County. Its total service area covers 1,200 square miles and it is bounded by the Kern County line to the north, the San Bernardino County line to the east, the Angeles National Forest to the south, and Interstate 5 to the West."

Marvin Christ, chairman of the AVTA Board of Directors said:

“I’m pleased to chair a transit agency as forward-thinking as AVTA that also has the political will to do something no other transit agency in the country has done yet – go all-electric. There are multiple benefits to electrifying our bus fleet, from creating jobs and eliminating harmful air pollutants, to reducing dependence on foreign oil. These benefits will be seen at the local, regional, state, and national levels. It’s really a win-win.”

“BYD Coach and Bus is proud to partner with AVTA on its groundbreaking decision to completely electrify its fleet. With more than 6,000 electric buses deployed worldwide and 90 million miles of dependable service already accumulated, we know that our technology will help AVTA save money and improve local air quality. Pure-electric powered transportation is no longer in the future - it’s here now. I hope other transit agencies in California and across the country take note and follow the example AVTA has set today.”

“This is a historic day for AVTA, which has been working diligently to secure grant funding to purchase these state-of-the-art zero-emission vehicles. We are proud to be the first transit system to adopt a goal of ‘100% Green in 2018’ and we look forward to leading the nation toward a new alternative in public transportation.”