Initial Demand For Toyota Mirai In The US Not Good, Only 600 Apply 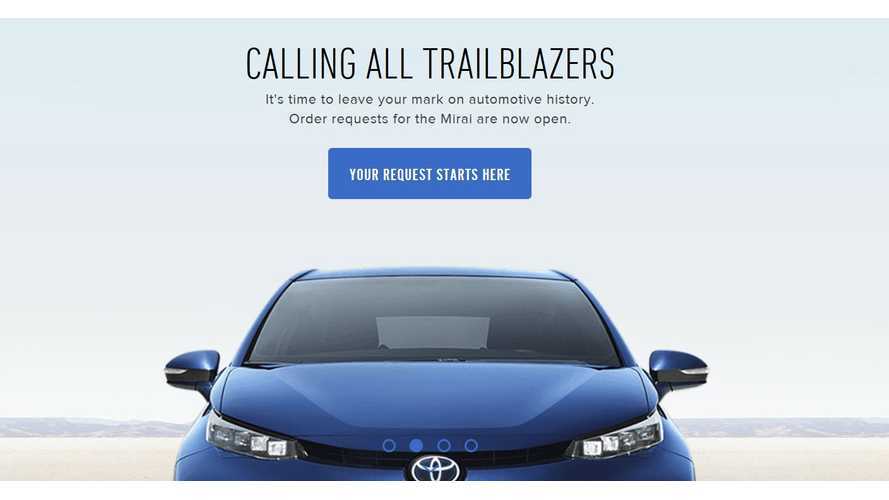 When the Chevrolet Volt first launched, InsideEVs' own Lyle Dennis (then running GM-Volt.com) had accumulated a want list of more than 50,000 consumers (details) interested in the car, with more than 20,000 willing to put down a deposit - this without any promotion from GM itself.

When the Nissan opened its web-portal for Americans to make $99 reservations on the LEAF, the site was instantly bogged down to a crawl.

"We had 2,700 reservations in the first three hours," reported Nissan’s senior director for customer management and business strategy.  Some 117,000 had even signed up ahead of the launch expressing interest.

So how about for the Toyota Mirai?  The much touted and advertised fuel cell vehicle, whose "Request Portal" opened on July 10th?

In the first 10 days of availability, Toyota reports 600 persons have expressed interest in being "contacted directly by a Toyota representative to explore the possibility of Mirai ownership."

“That’s everyone that has gone on to Toyota.com/Mirai and requested a vehicle (since July 20),”company spokeswoman Jana Hartline told WardsAuto on July 30th

Part of the reason for the poor showing we heard about from Toyota's Alt Fuel Manager Craig Scott a few days ago - that the new infrastructure for the Mirai, that is largely being funded by the US government, only has two of a planned 48 stations in operation today.

“The stations that exist today were built many, many, many years ago, using funds that were set up to create demonstration stations. That’s exactly what these are. They were never intended for retail use.”

In real world terms, this means that FCV owners can wait upwards of 20 minutes for the station to regain pressure if it has just recently been in use - provided that station itself is operational, something today's fuel cell vehicle buyers from Hyundai are sometimes experiencing.

In order to help alleviate the situation, Toyota says it will assist in "building dozens"  of hydrogen-refueling stations in both California and the Northeastern U.S. over the next few years, but patience is needed.

“There will be a period of discomfort if you will where the growth of cars exceeds the growth of stations, and then it catches up. It’s just kind of normal business. I don’t think there’s anything shocking here.”

The Toyota Mirai (full specs) MSRP stands at $57,500, and is available in California only, although up to $13,000 in lease incentives/reductions are available; lease deals are available now from $499/month with $3,649 down. The Mirai has an EPA-rated range of 312 miles and a MPGe rating of 67.