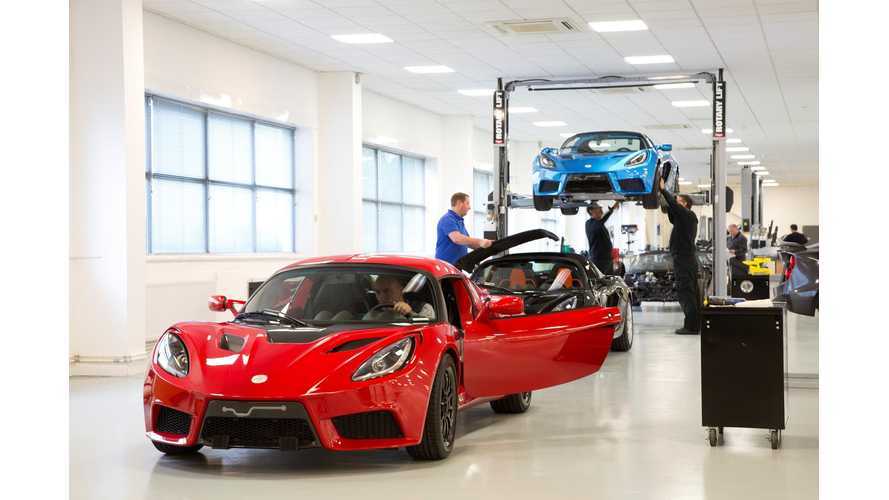 Detroit Electric announced on October 29 that the first SP:01 all-electric sports car rolled off the assembly line of its Leamington Spa manufacturing facility in the UK.

The car is based on the Lotus Exige and the company's intention is to repeat the success of the Tesla Roadster.

The company stated that SP:01 is "the lightest and fastest two-seat pure-electric sports car in the world".

"The lightweight SP:01, which goes on sale in Asia and Europe over the coming weeks, combines a carbon fibre body with an aluminium chassis. It has a class-leading power to weight ratio and promises blistering acceleration, reaching 60mph from standstill in just 3.7 seconds* (0-100km/h in 3.9 seconds) and sprinting to an impressive top speed of 155mph (249km/h). Featuring a 285HP / 210kW electric motor, the car is fitted with a single-speed automatic transmission as standard, with the option of twin-speed automatic or 6-speed manual transmissions."

Another point of interest is battery with "the most energy-dense automotive battery pack in the world, offering over 140Wh/kg"; we aren't quite sure about the validity of this quote, as it would have to be much, much more dense than 140 Wh/kg to be a world-beater (like 300 Wh/kg).

If nothing has changed, total capacity is 37 kWh for 288 km of NEDC range (nearly 180 miles).  This would translate to around 135 miles of real world driving on the US EPA rating system.

"The battery in the SP:01 has been integrated into the chassis as a stressed member, adding stiffness to enhance handling and safety. The battery is the most energy-dense automotive battery pack in the world, offering over 140Wh/kg, benefitting range while keeping overall vehicle weight low.

Every Detroit Electric comes with built-in bi-directional charge and discharge capability. Made possible through the patented Detroit Electric home charging and power back-up unit – named ‘360-Powerback’ – the unit turns the vehicle into a power source for both the grid and the home. An advanced Battery Management System (BMS) gathers data about the car’s battery health and on-board telematics communicate it directly to the factory."

The first unit will soon be delivered to the first customer, although retail prices in Europe and Asia aren't yet available (to be announced shortly). We are not sure if U.S. sales are still being considered, as the press release is silence about the U.S.

"Detroit Electric has established distributors throughout Europe and Asia extending from the North (Iceland and Norway) and the East (Azerbaijan, South Korea, China and Hong Kong) to the South (South Africa), with additional countries due to join the growing global network over the coming months. "

"The SP:01 comes equipped with an app-based system called ‘SAMI’ (Smartphone Application Managed Infotainment), which utilises Android technology and is fully compatible with Android Auto, providing safe access to a host of apps and internet functionality. SAMI allows users to search for nearby roadside charge points and then pre-book charging time, as well as review billing and credit information relating to their charge-point use.

When away from the SP:01, owners can use SAMI as a remote control unit via GSM, enabling them to locate the vehicle, turn on the climate control system and check the charge status. When in the car, the SAMI-enabled smartphone is installed in the centre console and becomes the interface for a wide range of functions, including music player, satellite navigation, regenerative braking adjustment, interior lighting and vehicle systems status – such as the level of battery charge, range to recharge and other telemetry."

“We are thrilled to see our first production car roll off the line at our UK manufacturing site. Our first customer is sure to appreciate the unique experience of driving the SP:01 as we’ve worked hard to develop technologies that ensure it is one of the most rewarding pure electric sports cars to drive.

“Seeing our vision realised is hugely satisfying and we can now focus on fulfilling a growing bank of orders. As our production process builds momentum, we look forward to providing this unique electric sports car to our customers all over the world.”