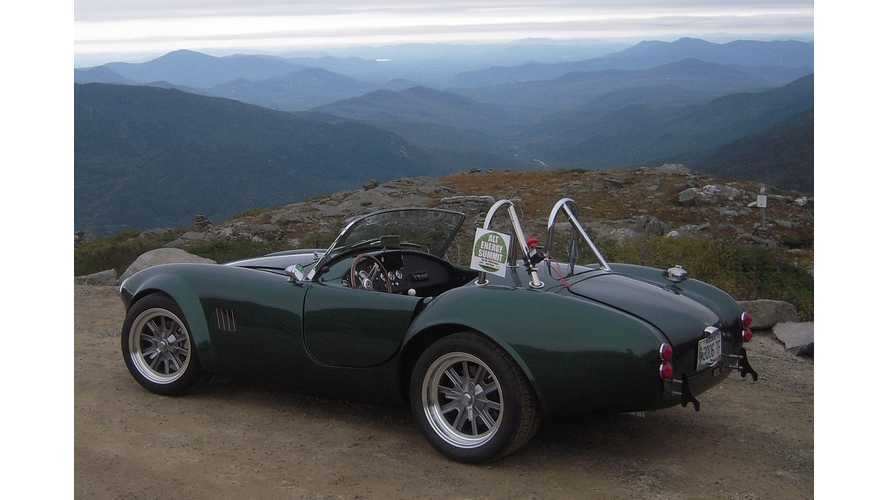 We like to go sniffing around the backwoods of New England, and in the Great State of Maine, we found this gem - a AC Cobra replica powered with an 11" DC motor ("DC Cobra"?), built from the ground up by NEDRA member and general madman, Wayne Krauth.  Krauth started this build in 2010, and has had this thing together for a few years now, but is only lately starting to pull the stops out and see what 2000A of battery will do to ETs, as well as various drivetrain parts.  Last we heard, he "turned 4th gear into another neutral ..." on an 90% power run, and was replacing the tranny with a slightly more robust unit. He calls it "Snake Oil".

Here are some shots of the car at work:

...at 60' against an electric Porsche

...and thrashing a Firebird

Wayne says: "I always admired the look of the Cobra, and when trying to decide what to build for a performance electric, it seemed like a great choice.    It's light, strong, handles like a go kart and has that classic look.   It had to have the power of a big V8, and maybe more."

Here are some of the pertinent details:

Built all electric from the beginning, never had a drop of gas in it.

Multiple goals of drag racing, autocross racing and just a fun car to run about with."

Performance - range estimated to about 60 miles per charge, or two trips up Mt Washington - best fuel economy is 115 MPGe using street tires and driving gently at up to 50 mph

- worst fuel economy is 26.5 MPGe for an afternoon of drag racing

Even in this short time, he's got some stories to tell - mostly they go like, "...after laughing, and racing me, the nitrous owners declined a second race".  Our favorite, though, is "one day at Winterport, the Cobra was running quicker ETs than an 1100 Suzuki drag bike.   The only motorcycle that was quicker than the Cobra was a very fast electric that was built and raced by Frank John." (More on that later...)

The Cobra at Winterport

Check out his EV Album page here, where you can see a complete build diary, including "8/24/14 - Set NEDRA XS/B drag racing record for 1/8 mile, while running at 64% power", and for a neat look at what it'd be like from the back seat (if there was a back seat) check out this over-the-shoulder view from his YouTube channel: