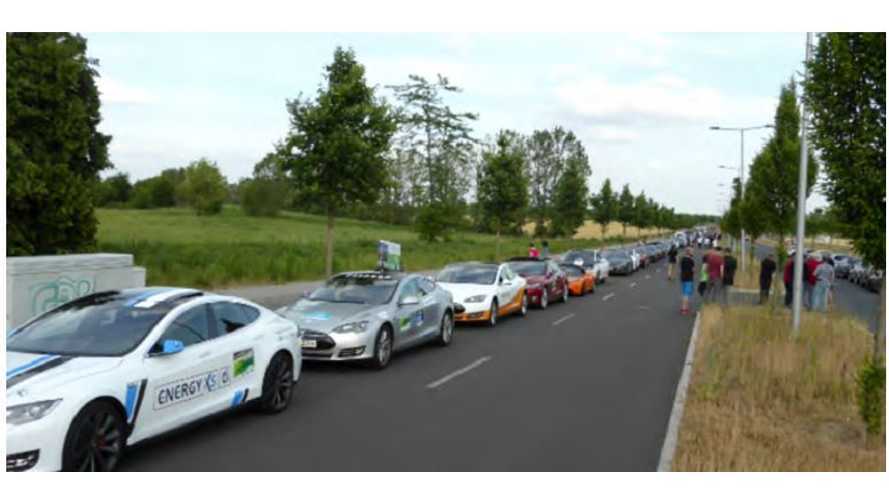 48 numbered switchbacks, to the top of an Alpine Pass for our EVs to
“tractor” up.

By Ron Freund and Alan Soule

Louis Palmer, an intrepid pioneer of http://SolarTaxi.com fame held his fifth annual EV Rally which toured Germany and Switzerland during the week of June 12 to June 20. See http://www.wavetrophy.com/en/ We joined him as tour director, leaving our solar powered EVs at home to brave the (to us, unknown) European charging standards along with 90 other teams and a support crew.

We traveled from eastern Germany, north to Berlin and then down thru central Germany to Switzerland, into the Alps. Our rented a Renault Zoe EV, with its 22 kWh pack, came from fm.de, a new rental company named ‘Future Mobility,’ based in Zwickau. We were supplied with all cables and charging paraphernalia including an obligatory towing cable. The website has a 5 min 56 sec video which shows Louis welcoming our “Team Kalifornia” at the 35 second marker.

The trail we followed only had daily end points identified, leaving the precise route to be driven to the discretion of the drivers. This wasn’t as easy as it sounds because there are several routes that you could take with the Autobahn usually being the shortest time but longest distance route. The challenge was that you had to choose the shortest distance route or you wouldn’t have enough charge to make it to the next stop. So, we ended up taking very small country roads to cut out as many kilometers as possible. The highlight of the trip was a single day ascent over five of the famous Alpine passes, from St. Moritz, ending up at the highest one near the Swiss-Italian border. It’s called the Stilfserjoch, at nearly 9,000 ft ASL in the South Tyrolean Alps of Italy, which in English, is called the Stelvio Pass. The red box on this map frames the actual summit.

The parade of EVs included a Nissan e-NV200 van and LEAFs, several BMW i3, VW e-Golf and E-Up!, Opel Ampera (the European Chevy Volt), Th!nk ‘City’, Twike (3-wheel), Renault Zoe, a rare BYD e-6, Tesla Roadsters and Model S, along with Zero SR motorcycles, Kia Soul EV, handbuilt e-motorcycles, several converted vehicles (including a VW Vanagen with 106 kWh of lithium polymer cells, a Mazda RX-7 with Li-Po cells, and an Audi A8), Corbin Sparrow, Volvo C-30, MB B-class plus several e-bikes. The “range extended” BEVs (such as the i3 REx and the Opel Ampera) had their gas tanks drained and then purposely run dry, then their filler flap was sealed with tamper-proof tape.

Given that each of the vehicles had different size packs and various charging arrangements, our parade quickly dispersed, with daily group specific gatherings at nightfall. Our housing facilities included hostels, bed and breakfast residences, dormitory style facilities and hotels. All were first rate, clean, and comfortable. On the tour, our daily trips included up to five charging opportunities which were pre-arranged by the WAVE organizers in small towns and cities, in public marketplaces, and on occasion, at a local fire house. The tour was split into four groups. In advance, each was identified with an optimal route to follow for their needs. That way, not all of the vehicles would converge at one time on one location, exhausting available charging capabilities. There were ‘Pioneers’ (which included conversions), the ‘Popular Light’ and ‘Popular Heavy’ groups, two and three wheeled E-bikes, motorcycles and of course, the Support group. All drove only battery powered vehicles.

Our send-off was with much fanfare from the city of Plauen, in the former east-bloc portion of Germany. Since the end of the Cold War in 1989, many improvements have been made, with building restoration and renovations of neglected infrastructure. Driving thru the countryside, we repeatedly saw large fields of ground-mounted solar arrays, while the horizon was peppered with large 2-5 MW wind turbines, their blades turning slowly. Renewable energy is taken very seriously in Germany, with their ambitious goals (66 GW of installed PV capacity by 2030 as well as getting off fossil fuels) for electric power generation. Today, Germany and China are tied for the lowest cost per installed PV watt, about 1/3 of the US cost.

Translated, that window decal asks provocatively: “Are you still tanking up, or are you
already charging?”

One requirement of participants was that we make short public presentations at schools and prearranged gatherings with local dignitaries (the mayor and town elders, etc). We spoke passionately for a few minutes allotted us about our vehicles, our background (and our vision for “the future” — It’s electric! Have you heard?) Minds and ears were open, with both children and adults alike, being receptive. We conveyed that over 340,000 Americans were already driving plugin cars today. One team parked here next to our car (Team 42) had a window sticker which conveyed it best. The enthusiasm was infectious, and the teams were (subjectively) judged by our audience with cheers.

One day, early in the trip, we got to take a lap around the famous 2.28 mile long Sachenring race track, (see http://www.sachsenring-circuit.com/en/sachsenring/track/data-sheet) However, in our car, that experience was just underwhelming!

CHARGING ALONG THE TOUR

Most of the WAVE2015 vehicles were equipped with a method to quickly charge their packs, should hefty 3 phase power sources appear. The Tesla’s tapped only public Superchargers and HPWC, well known to them. All of the various other cars used Mennekes Type 2 connections, with drivers supplying their own cables. Here in the lower left corner of this page, is the SAE Mennekes 3 phase variation of the CCS connection now beginning to see use throughout Europe. Any public EVSE was simple a pedestal. There were no cables left hanging, thereby inviting vandals.

This approach is neat and clean, leaving ‘less to chance’ for EV drivers who might use public infrastructure heavily. See image of one such pedestal above.

This is the CCS European version (including a Mennekes Type 2 with two of three phases missing a metallic connection in the second row from the top!)

Who paid for the electricity we consumed? The WAVE Tour organizers struck a deal with local municipalities and part of our entrance fee covered such expenses. Our meals were also provided while on the road, with occasional special treats. Optional beers and bratwursts were plentiful (but we kept a designated driver)! The photo on the right shows an ingenious arrangement for hiding a charging power source in plain sight, for ready access, should the occasion arise. The cobblestone pavement was raised for access. Notice the 18” frame covering a feeder, which we tapped into. Three phases, each 230 Volts at 63 Amps was quickly broken down into smaller feeds so that everyone could get some power. Some smaller vehicles only had 3 kW chargers, but those running at 230 volts still functioned better than our level 1, 120 volt overnight charging — still frequently used in the US today.

Three phase input via Mennekes Type 2 (blue) connector, SAE CCS DC connection to the EV on the right side. This microcontrolled inverter was used to “DC quick charge” a VW e-Golf during the tour.

On wheels, this DC charger was pressed into service as well in Switzerland near the end of our trek.

The image comes from: https://driveandream.files.wordpress.com/2014/02/marks-iphone-4s-054.jpg

After arriving in Switzerland, we were able to get an invitation to tour one of five Swiss nuclear power plants in Mühleberg. Nuclear power has become a political issue worldwide, especially with the rapid growth of renewable electricity sources. The tour lasted about an hour, after which our escorts released us. Our guide simply didn’t understand the change underway in powering transportation, nor could they envision a non-nuclear powered world. The WAVE organizers did diligent homework, predicting how far each vehicle could travel so as to group us together. They employed elevation profiling (which we verified conservatively as 1.5 kWh extra for every 300 meters of elevation gain). Charging spots were arranged where they would be needed and special power distribution boxes were brought along to ensure that every team was able to recharge as needed. Nowhere did we run out of energy; we did our best to keep to the schedule yet we were occasionally stymied by unexpected summertime road construction.

Using the navigation tools and assisted by Google maps on our cell phones, we took not only an occasional Autobahn, but stuck with the 2, 3 and 4 digit labels of even lonely country lanes, barely one lane in width, encountering very little traffic! Occasionally we would see other teams approaching us from the opposite direction, which was a bit unnerving. An excellent website for navigation and planning was offered to us by one of the participants. It was http://goingelectric de which offered features not yet seen on an American website, under the pulldown“Stromtankstellen” (power fueling stations). It’s worth taking a look at, plus there are more photos and daily videos of our adventure there as well. All participants were encouraged to blog and post images on Facebook about their experiences.

The weather held nicely with only scattered clouds on most days, and an occasional late afternoon thunderstorm. The scenery was incredible! The teams were outgoing and friendly. At every stop, we made an effort to connect with a newcomer to EVs, acquainting them with the concept, costs, and advantages. That effort made us aware how many Europeans don’t even own cars, live in apartments and yet still flourish. The public transit system is well established and very predictable. Other groups may be interested in joining what is rapidly becoming an annual event. Their website provides glimpses back to earlier tours. Maybe in a few years, autonomous (electric) cars will simplify the lives of Americans the same way some people already enjoy their EVs today.

Here is a listing of the cities we visited, and where we charged up:

Europe faces the same challenges and impediments as it does in the US when it comes to mass adoption of EVs. A large group of German Tesla owners drove to Berlin to address their government body there regarding the lack of sincere support from their national auto manufacturers. This includes the lack of public infrastructure, lack of widespread understanding of the alternatives, etc. Other US groups may be interested in joining what is rapidly becoming an annual event. Their website provides glimpses back to earlier tours. Maybe in a few years, autonomous (electric) cars will simplify the lives of Americans the same way some people already enjoy public transportation there today.

The organizers of the WAVE2015 tour deserve huge recognition for the unenviable task which they delivered on – that of orchestrating the logistics (food, lodging, charging) for the largest ever gathering of participating teams, each with similar yet different requirements, to be able to make the trip successfully. A heartfelt “thank you” to Louis Palmer and his ‘behind the scenes’ support crew for making our trip such a fun experience.