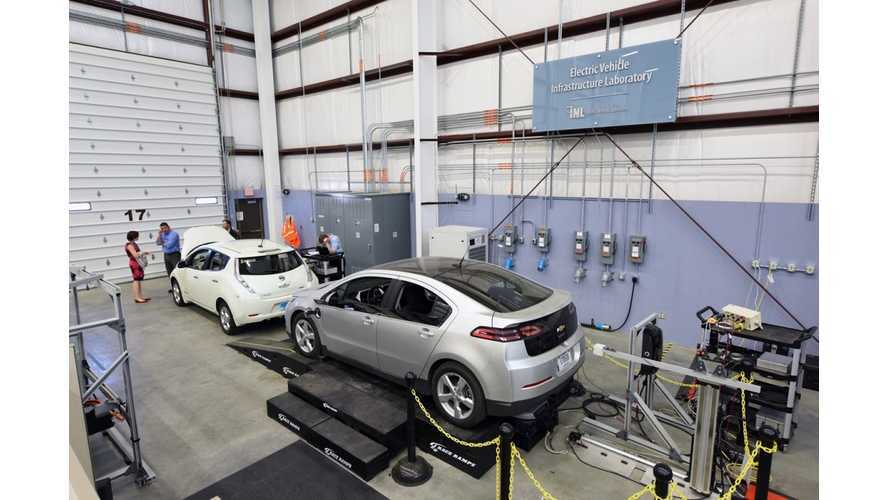 "Between early 2011 and the beginning of 2014, study partners installed more than 17,000 charging stations around the country and tracked the charging habits of more than 8,000 plug-in hybrid and all-electric car drivers. Participation from automakers (mainly General Motors and Nissan), charge station providers like ChargePoint and Blink, and car-sharing services with EVs in their fleets, made this a genuinely nationwide study. EV owners and businesses were given incentives to participate, with DOE installing Level 2 chargers in homes and company parking lots wherever it could obtain written consent to monitor use over three years."

In total, those Nissan LEAFs and Chevrolet Volts covered 125 million miles (200 million km) and it's interesting to see how those cars were used and charged.

The first insight is that on average both cars are covering nearly the same distance in all-electric mode, despite Volt having much less EPA range than LEAF. The difference of just 6% is the result of general higher mileages of Volts and the range extender, which encourages Volt drivers to use all available electric range, while LEAF drivers often need to save some reserve as there is no backup.

Idaho National Laboratory: Volt drivers averaged only 6% fewer EV miles per year than Leaf drivers, despite having less than half as much battery energy storage capacity.

Monthly average for LEAFs stands at some 800 miles.

Nissan LEAF and Chevrolet Volts are charged mainly at home, while away-from-home charging is typically limited to just a few sites.

Idaho National Laboratory: Public and workplace charging infrastructure enabled drivers to increase their electric driving range, although most drivers did not charge away from home frequently.

If you check the report you will also see that a decent percent of drivers were using LEAFs relying on work charging to get back home.

Idaho National Laboratory: 98% Of charging events were performed at home and work on work days.

The workplace charging point truly extends the capability of EVs:

Another Idaho National Laboratory conclusion was about DC fast charging:

"The most highly utilized DC fast chargers tended to be located close to interstate highway exits."

That would hopefully finally change the policies to install DC chargers clustered in cities instead of along the routes.

"– Where charging was fast, public stations were popular — as long as the price was low. Delivering up to 80 percent in 30 minutes for the Nissan Leaf, DC fast chargers saw use when located near highway interstate exits. EV drivers were confident they could take their vehicles on longer trips, and local drivers were able to get powered back up on days when home or work charging was less convenient."

Learn more in the report: Plugged In: How Americans Charge Their Electric Vehicles

Update (chart below):  Fleetcarma also put together a nifty infographic on the results as well.