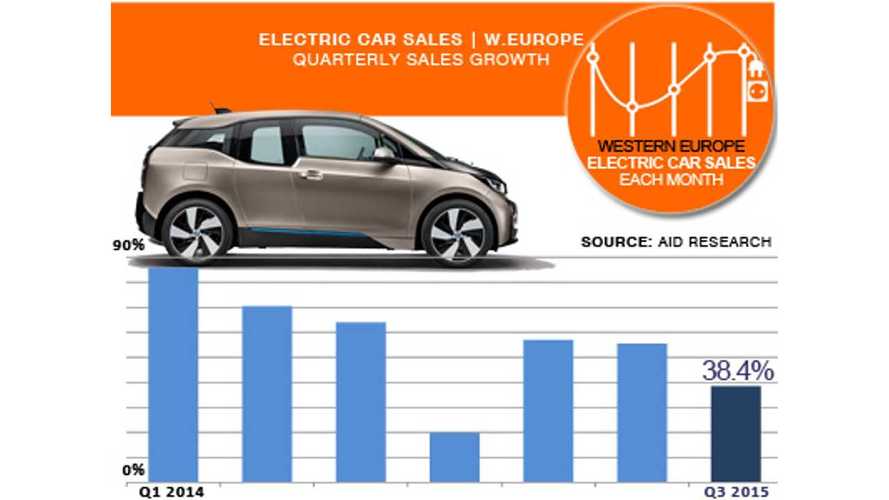 With one quarter still to go, EagleAID forecasts all-electric cars sales for Western Europe at 86,000 for 2015.

EagleAID notes that the third quarter was one of the slowest in terms of growth - but still at 38.4% year-over-year.

We are not afraid of the slowed growth, because 38% is high and there are new models scheduled for 2016 like the new Nissan LEAF.

With plug-in hybrids added in, Western Europe will without a doubt exceed 100,000 sales this year. The question is how much above 100,000 will the year-end figure be?

"Despite another month of double-digit sales growth from electric cars in Western Europe - with AIDs exclusively compiled figures showing a near one-third jump in September registrations - the sectors underlying rate of advance has progressively slowed as the year wore on. It suggests that this years remaining 4th quarter could see more of the same

AID figures reveal that underlying demand for electric cars in Western Europe has now slowed down in six of the last seven quarters, tempting AID forecasters to the cautious prediction that this years final fourth quarter will be no exception.

After four successive quarters of slowing growth in 2014, during the current year the underlying electric car sales trend continued much in the same manner.

Whereas this years first and second quarter kicked off with respective growth of 57 and 55.5 per cent, the rate of advance in the third quarter slowed to 38.4 per cent.

This marks the second slowest quarterly growth in two years.

Barring the totally unpredictable on the crucial electric car subsidy front, and three-quarters through the current year, AID forecasters now believe that this years electric car sales remain on course to reach a likely 86,000 units - the annualised sales rate in the first nine months of the year..."