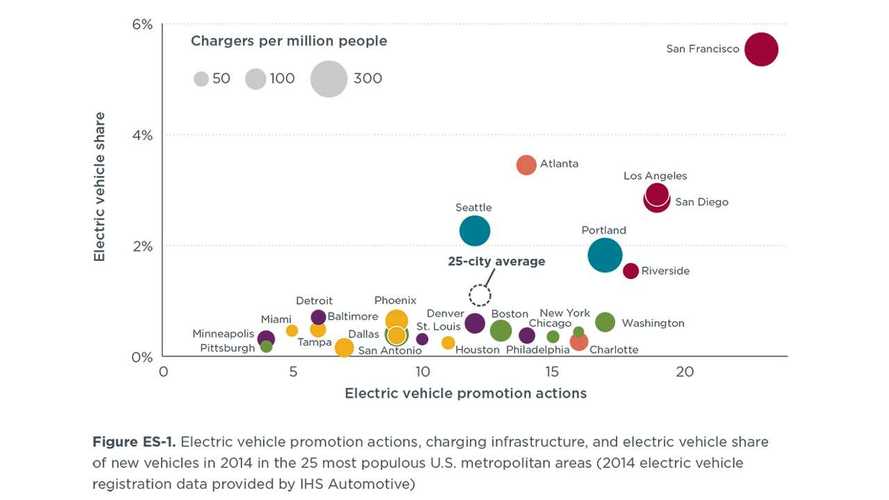 This Bridge Must Be Jam Packed With Plug-Ins

Highlights of the report includes a very interesting graph with a comparison of the 25 most populous metropolitan areas in terms of EV market share (vertical axis), EV promotional actions (horizontal axis) and charging points per million people (the size of the circles). Every state has a different color.

Why Top 25? Because together those metropolitan areas represent more than 42% of the population, 46% of auto sales, 67% of new electric vehicle registrations, and 53% of the public electric vehicle charging infrastructure in the U.S., as of 2014

Data for the year 2014 comes from IHS Automotive and, as it turns out, the clear market leader is San Francisco.

"Seven cities stand out for their higher electric vehicle sales. San Francisco, Atlanta, Los Angeles, San Diego, Seattle, Portland, and Riverside had 2 to 7 times the electric vehicle uptake of the US average."

"Across the 25 cities studied, which featured on average a dozen activities to promote EVs, plug-in electric vehicles accounted for 1.1% of new automobile sales in 2014, about 40% more than the nationwide electric vehicle share. "

"What are the key findings? First, government policy is clearly important in driving electric vehicle deployment. Cities with the highest electric vehicle shares tend to be located in states that have joined in the Zero Emission Vehicle program and also have consumer incentives. Various cities are leading in different ways – some with more direct incentives, charging infrastructure, some with more outreach and awareness activity, and other with utility support for electric vehicle users. For example, for Atlanta incentives were the thing; for Portland, public charging and outreach are working; California cities have a more comprehensive package of activities by many actors. Generally we realized that model availability appears to holding back electric vehicle sales in many of the markets."