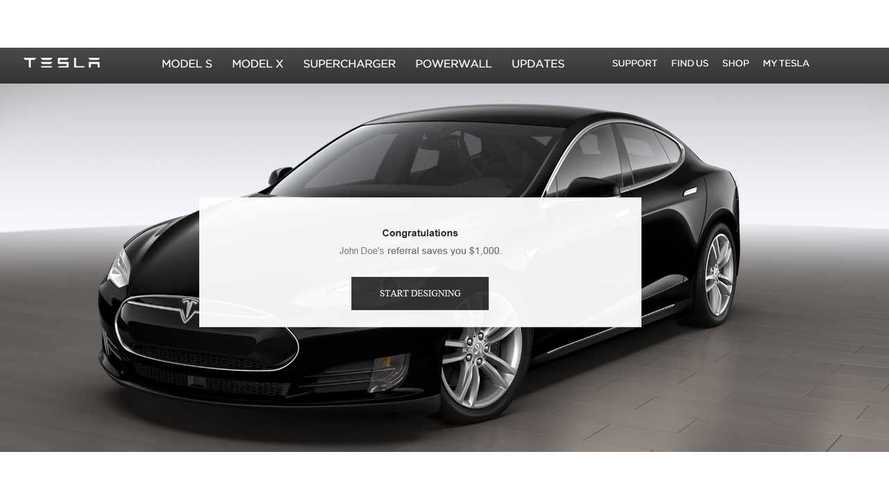 It is no secret that Tesla certainly doesn't employ the 'traditional' sales model by any stretch.  The company doesn't have hundreds of dealer franchises dotting the country - or even a advertising budget to speak of.

Promotion is achieved basically in 2 ways:

-word of mouth from Model S owners and EV advocates

A new referral program from the company looks to enhance the latter.

From now until October 31st, Model S owners who refer the company a new sale will receive a $1,000 credit (which can be used against the purchase of a new car, repair or accessory item), while the person actually purchasing the car will also get a straight $1,000 off the cost - essentially the first discount to be widely offered by Tesla on the MSRP.

In addition, for those who are really ambitious with the referral program, 5 referrals nets you "an invitation for them and a guest to attend the Gigafactory grand opening party".

For the uber ambitious - 10 referrals, get you the option  to purchase a "fully loaded Founder Series Model X, which is not available to the public, for the price of a base-level Model X—roughly a $25,000 saving."

The first person to make ten referrals?  Well he (or she) gets a Model X for free.

The First To 10 Referrals Gets A Tesla Model X - Gratis

Anyone who orders a new Model S before October 31st using the referral link of a current owner will get $1,000 off the purchase price. In return, the current owner will get a $1,000 discount that can be applied to a new car, service center visit or accessory. Referral discounts are limited to ten and are awarded on a first to purchase basis. New orders must be placed prior to October 31, 2015.

Limits You must be a current Tesla owner to make referrals and cannot refer yourself. Discounts will be available for you to use when your friend’s order becomes non-refundable. You can use discounts toward a service center visit for your Tesla, to buy accessories or even a new Model S. Discounts are not transferrable and cannot be used to make monthly payments, purchase pre-owned Model S, or reserve Model X.

Free Model X The first person to refer ten friends in each sales region— North America, Europe, and the Asia-Pacific — will receive a free Model X. They will be invited to configure their Model X once all ten friends have taken delivery of their new Model S.

5 Referrals Will Not Only Put $5,000 In Your Pocket, But You Will Get An Invite To The Gigafactory Launch

Redemption Discounts will automatically be applied to the purchase price of any new Model S. Discounts on service and accessories will be available beginning August 15, 2015. Remaining discounts will expire on December 31, 2016.