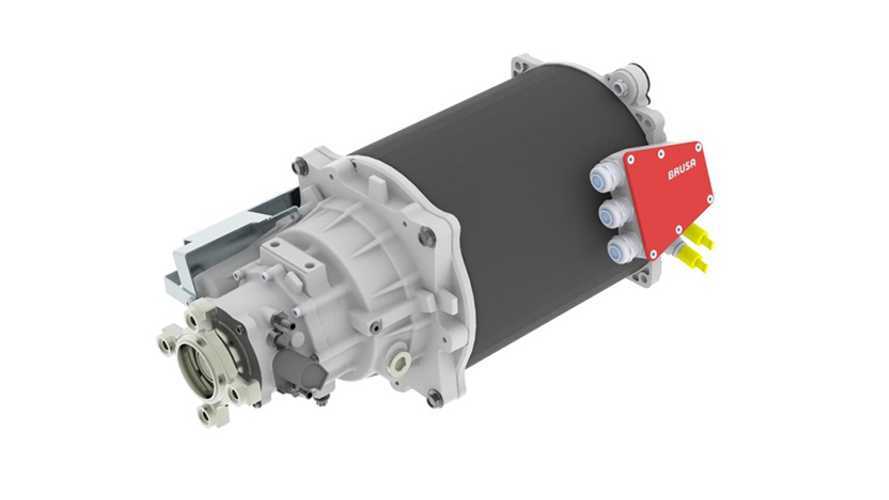 DTSP1 is available in different configurations of motors and inverters.

"With its multi-vehicle application possibilities BRUSA's new electric drivetrain unit DTSP1 combines motor and gearbox and is optimal for use in sports cars and vans as well as light commercial vehicles due to its low weight and high power density. The compact design of the gearbox when coupled with BRUSA's powerful  HSM1-10.18.22 motor paves the way for a highly efficient yet powerful range of electric vehicles. The Dimensions of the motor with its length of 346 mm, diameter of 270 mm and its weight of 76 kg makes it unique in its performance class and is characterized by a very high continuous power output of 145 kW and a maximum output of 220 kW. From a nominal speed of 4’400 rpm the motor provides constant power to its maximum speed and a very high efficiency over a wide speed and torque range.

The gearbox is in turn, due to its scalable performance (all with the same optimized form factor), the perfect drive train for light commercial vehicles. By using the differential on the axles, powerful yet weight-optimized drives can be realized. With the adjustment of the axle differential every application can be achieved with the right ratio. Motor and gearbox have been developed according to automotive standards and can be supplied as a single piece and in volume. In the Electric Sprinter by the company Kreisel Electric GmbH a Motor/Gearbox combination of BRUSA with shorter motor HSM1-10.18.13 is already successfully in use. This purely electric Sprinter is a highly efficient commercial transporter with a 3.5 t payload and a range of up to 350 km. "

A comparison of different configurations was presented by Green Car Congress

Kreisel Electric converted the Mercedes Sprinter to electric drive using BRUSA DTSP1 (with shorter motor HSM1-10.18.13) and the result can be seen here.