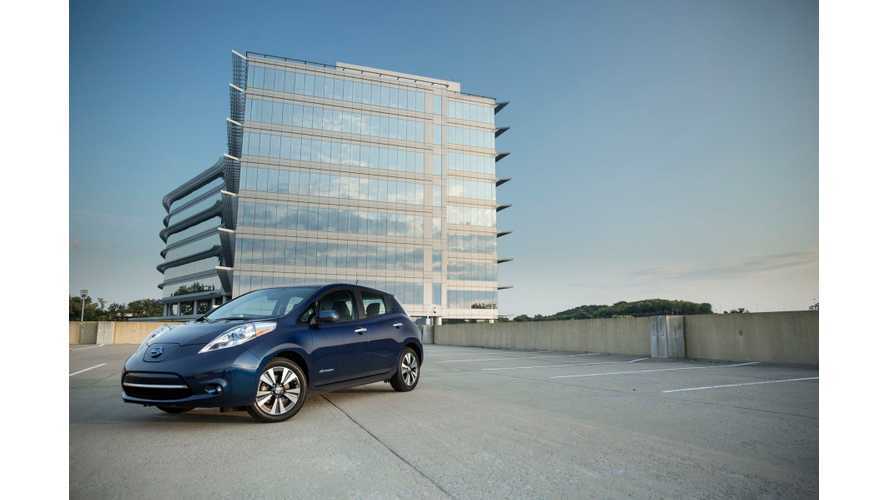 For LEAF, it's the second win in this category (see previous year post), which means that LEAF buyers must be pretty loyal to the Japanese brand and to the LEAF itself:

"Nissan LEAF continues to earn praise and was recently named the best Non-Luxury Traditional Compact Car in the 20th Annual IHS Automotive Loyalty Awards. This is the second year in a row the all-electric LEAF was recognized with this award during the Automotive News World Congress held in conjunction with the North American International Auto Show in Detroit.

IHS Automotive analyzes loyalty throughout the year and regularly works with its customers to effectively manage owner loyalty and conquest efforts through in-depth research and analysis of automotive shopping behaviors, related market influencers and conquest and retention strategies. Loyalty is determined when a household that owns a new vehicle returns to market and purchases or leases another new vehicle of the same make, model or manufacturer."

"We know that Nissan LEAF drivers love the benefits of driving electric—zero spending on gas, quick acceleration and the feeling of driving an environmentally friendly vehicle, to name a few—which is why so many LEAF owners come back and buy another LEAF. Receiving the IHS Loyalty Award for the second year in a row demonstrates that LEAF owners repurchase more often than owners of any other compact car, and it is evidence of their strong enthusiasm for all-electric vehicles."

But perhaps the biggest winner of the 2015 IHS Automotive Loyalty Awards was Tesla, as the company received two awards:

Because Tesla was only selling a single model during the timeframe for the award, we could assign it directly to the Model S.

"Tesla was honored for Most Improved Conquest Percentage and Most Improved Loyalty to Make, which as a new manufacturer, helps demonstrate that Tesla is now able to compete in the mainstream market for new conquests while retaining their current customers. "

General Motors opens the award list with the Overall Loyalty to Manufacturer award: