Plug-In Electric Car Registrations In UK Up 27% In January 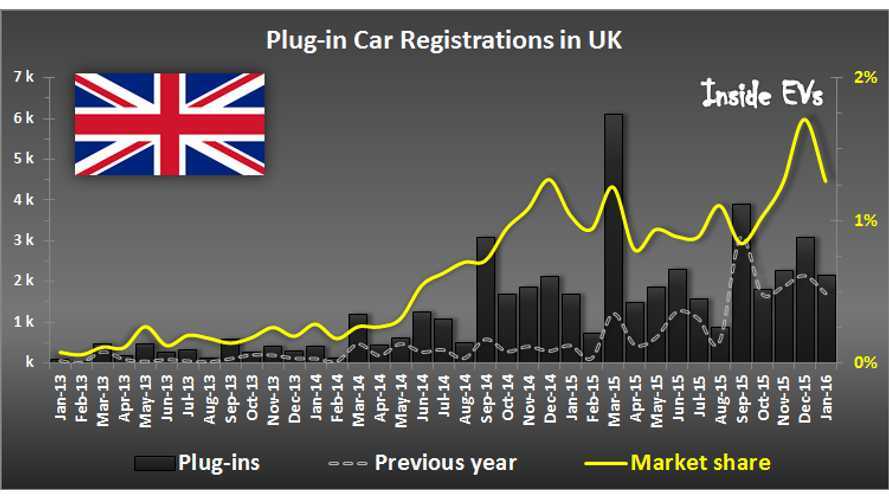 Plug-in electric car sales continue to grow in the UK in 2016 with a 27% increase in January over the previous year.

Market share amounted to 1.28%, which is one of the best results ever, and even the SMMT official statement notes growth of plug-ins:

The majority of the sales in the UK are plug-in hybrids and that probably will continue as most of them will qualify for the lower £2,500 plug-in car grant rebate starting on March 1, which additionally increases sales for now prior to the rebate being reduced.

Mitsubishi, who offers the most popular plug-in car in the UK - the Outlander PHEV, reassures us that it's worth placing an order before the end of February, because buyers still can get £5,000 if the car will be delivered within next 9 months:

" The announcement that the plug-in car grant will reduce from £5000 to £2,500 for plug-in hybrid vehicles bought after 1 March, 2016 has also brought increased interest in the Outlander PHEV from buyers looking to beat the deadline.

The Government’s plug-in car grant scheme allows for a nine-month delivery period, which was introduced to allow for car companies’ different lead times. This means vehicles ordered before the end of February 2016 will still qualify for the full £5000 plug-in car grant, even if they are not delivered and paid for until November 2016."

All-electric car sales probably could be higher, but as you know Nissan's LEAF has been hit with a stop sale in Europe tied to a telematics issue.

It's probably the main reason why sales dropped in January instead of the expected increase.

137 registrations in January was significantly lower than 319 one year ago and 230 two years ago.