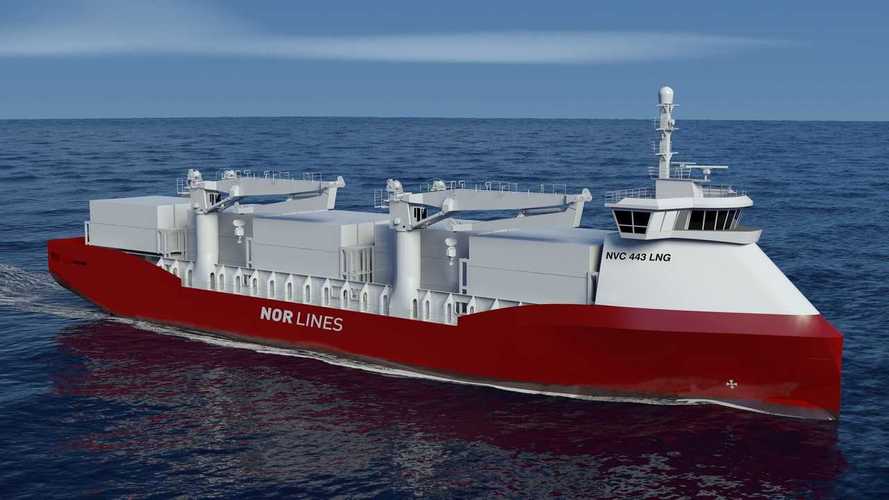 The shipping industry has the same challenge as the automotive industry - strict emissions standards.

Because there is not much room for improvements of conventional technologies , manufacturers are moving towards plug-in hybrids and electric ships.

Green Coastal Shipping Programme was launched in Norway (by DNV GL and 25 partners from the Norwegian maritime industry and the Norwegian authorities) with five different projects.

They aim to develop very efficient and environment friendly ships like the CargoFerry plug-in hybrid with LNG back-up.

"The pilot projects include several different ship types, and infrastructure with an emphasis on alternative fuel concepts. "When we launched the Green Coastal Shipping Programme, we said we wanted to make Norway a world showcase for green coastal shipping. With these five pioneering pilot projects we are well on our way," says Programme Director Narve Mjøs.

The first pilot project, CargoFerry Plug-in Hybrid, aims to develop a cost-effective and profitable short-sea container ship that is powered by a plug-in hybrid LNG/battery propulsion system. It is a short-sea container ship concept with a zero-emission solution during port sailing and operations. After developing the technical concept, the project partners will calculate the vessel’s environmental footprint and carry out a cost/benefit analysis. The shipping company Nor Lines will take the lead on this project.

Teekay Tankers will lead the second pilot project, which will investigate technical solutions for utilizing batteries and VOC (Volatile Organic Compounds) in a shuttle tanker. Battery technology has not been used on this vessel type yet and the project will explore how it could potentially help to optimize operations and reduce the need for installed power. The project partners will also look at the possible use of batteries as a ‘spinning reserve’.

After assessing the economic and regulatory feasibility of battery-powered shuttle tankers, the project will review new technological solutions for utilizing VOC produced on board. VOC are by capturing and condensing the recoverable gasses produced during offshore loading. Using the liquid VOC for onboard power generation could reduce total fuel consumption and the environmental impact of the vessel. VOC is generated during offshore loading and is an energy source which could potentially offer an environmental benefit in addition to reducing the total demand for fuel.

The objective of the third pilot project is to define an optimized hybrid propulsion system for more energy efficient operations with greater redundancy. The project owners are ABB and the Cargo Freighters’ Association.

This project aims to develop a cost-efficient LNG distribution concept with a hybrid LNG/battery propulsion solution and zero-emission port operations. Converting an existing vessel may provide a cost-effective option for small LNG carriers. The project owners Øytank Bunkerservice and the Norwegian Gas Association will lead the way in developing the technical concept, calculating the environmental footprint and carrying out a cost/benefit analysis.

The fifth pilot project has the objective of developing a low-energy-consumption port with a minimal carbon footprint. Some of the technologies being employed to achieve this include electric heavy-duty vehicles and cranes. The green port will also be equipped with smart gates, offer cold ironing services and charging stations for plug-in hybrid ships.

Risavika Harbour in Stavanger will take the lead in the green port project, developing the technical concept, undertaking a cost/benefit analysis, calculating the environmental footprint and presenting a plan for further development of the concept."