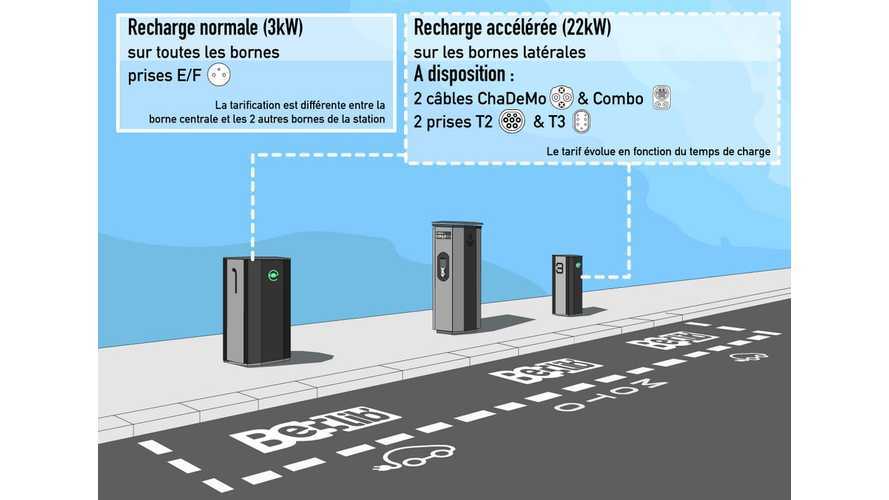 Paris, besides having thousands of slower AC charging points installed for the Autolib car sharing service, in January received a new charging network called Belib - installed for a cost of €10.4 million.

Belib consists of 60 stations with two multi-standard semi-fast (up to 22 kW) chargers on both sides - 2x CHAdeMO, 2x CCS Combo and 2x Type 2 + Type 3, as well as slow 3 kW outlet in the middle for things like Twizy or scooters.

With such a high number of charging types, everyone should be able to find some port to charge simultaneously.

According to the CHAdeMO Association Europe, there is a €15 fee to sign-up, and then when using it would be smart to not exceed one hour of charging that cost €1, after which the costs grow quickly (a charging station isn't just a parking space after all):

"The pricing scheme encourages shorter charging sessions and quicker turnover at stations, while providing a service that is financially attractive for EV drivers. 15€ to sign up, the user can charge their EV for 1€ for the first hour, 2€ for the additional 15 min and after that 4€ for each 15 min slot that follows. Only vehicles that are charging can be parked at the Belib’ charging spots. To make sure that no vehicle blocks these slots without taking electricity, each charger is equipped with a radar that detects the presence of vehicle in front of it. If no charge takes place, Belib’ network informs the police, which can then be sent to the charge station and potentially give a ticket for illegal parking.

Belib’ project proves that fast and semi-fast chargers are not only meant for highways but are also perfectly adapted to urban environments. Furthermore, this quick energy top-up service is a key component of a complete urban e-mobility strategy and a leverage to encourage companies to switch to electric vehicles. Given that Paris’ mobility initiatives often inspire cities around the world, we can expect other urban fast charging networks to come in the near future."