Busworld 2015 - a milestone show for BYD with three premieres

The first is a pure electric double decker - one of five, which right after the event will be used in London! With 345 kWh it will go 300 km (186 miles) on a single charge.

"Designed especially for service in the world's ‘double decker capital’ – London, BYD’s 10.2m double decker (making its World Premiere) is the bus some said could never be built: a pure electric double decker. BYD took up the challenge and delivered the bus in just two years – five go into service on a key Transport for London route straight after Busworld."

Another new model was the green 18-meter articulated bus with capacity of 150 people. Battery capacity stands at 270 kWh, so the range will be up to 220 km (137 miles).

"Also making its World Premiere is the BYD 18m articulated bus . With capacity for 150 passengers, this is the largest pure electric bus ever built and is configured for the many European cities where double deckers cannot operate. The Busworld vehicle is fitted with an optional overhead pantograph which allows recharging in just 1.5 hours from 0 to 100% when the bus is in the bus station or depot. The bus has a range on a single charge of 220km under UITP SORT conditions."

"As well as the two high capacity buses on its stand, BYD is introducing another new pure electric bus to the European market - the BYD 8m midibus which has previously only been sold in China. This is the first time it has been seen in Europe. The show bus is to China market specification but a European version will be available shortly."

All there models will expand BYD's previous offer of 12-meter ebuses to fulfill the needs of every city. 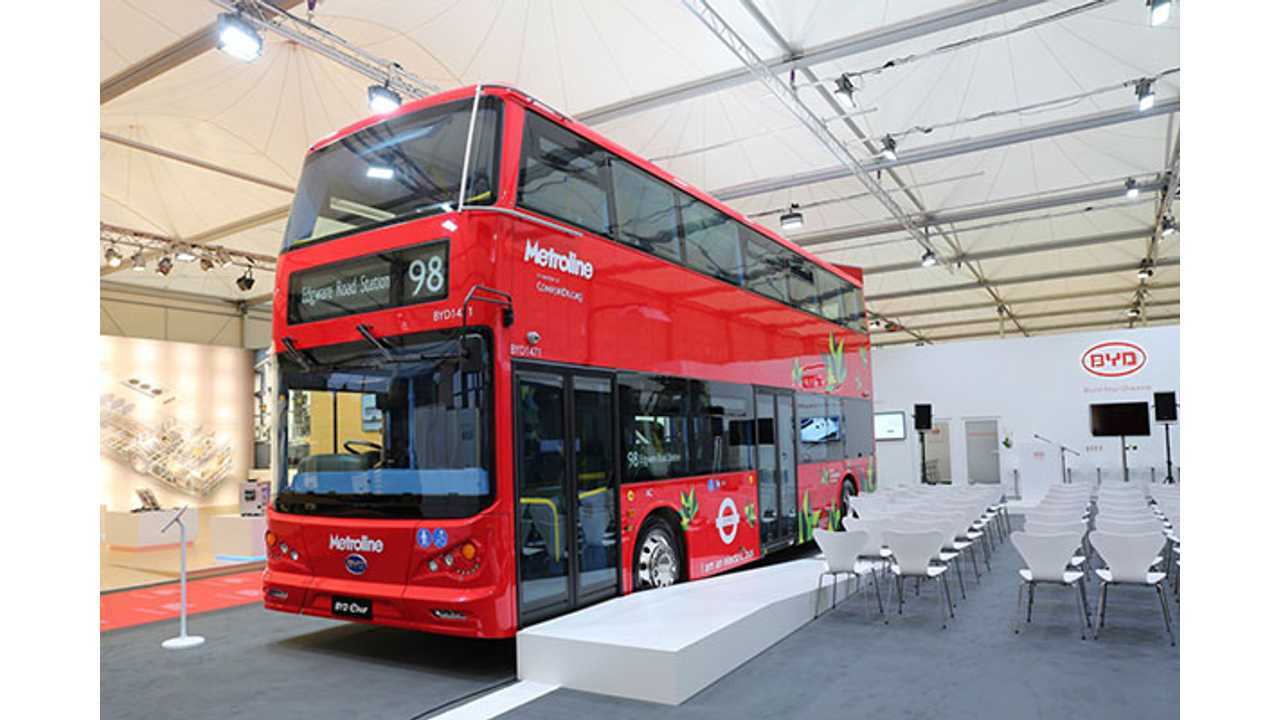 “We can now offer operators an emissions free solution for every bus type meaning there can be no reason to further postpone going electric, not tomorrow but today. We have effectively eliminated range anxiety with our ever improving battery technology, we can offer innovative financing packages and we have enhanced our support team in Europe.”

“Sales of our ebuses are now taking off – the latest contract for 51 for Transport for London with bodies by Alexander Dennis (ADL) is a milestone and follows the fleet of 35 ebuses now in service at Amsterdam Schiphol airport. With the much wider range of products we are unveiling today we can now meet every demand”, said Mr Ho, who went on to hint at a further imminent development of the BYD-ADL relationship.

“BYD is a big player in this market and has invested heavily in developing the battery technology and also battery management technology. BYD has excellent facilities which I have seen for myself for manufacturing and testing. BYD is a world leader and we hope its commitment will continue to grow and that we will see rising numbers of all-electric vehicles produced with longer ranges and lower unit costs. It is also exciting to see BYD work in partnership with Alexander Dennis who have a well-established reputation in London and Europe. So, this is an exciting time to be enhancing the fleet with rapid developments in battery technology and benefitting from BYD’s research and development in this area.”