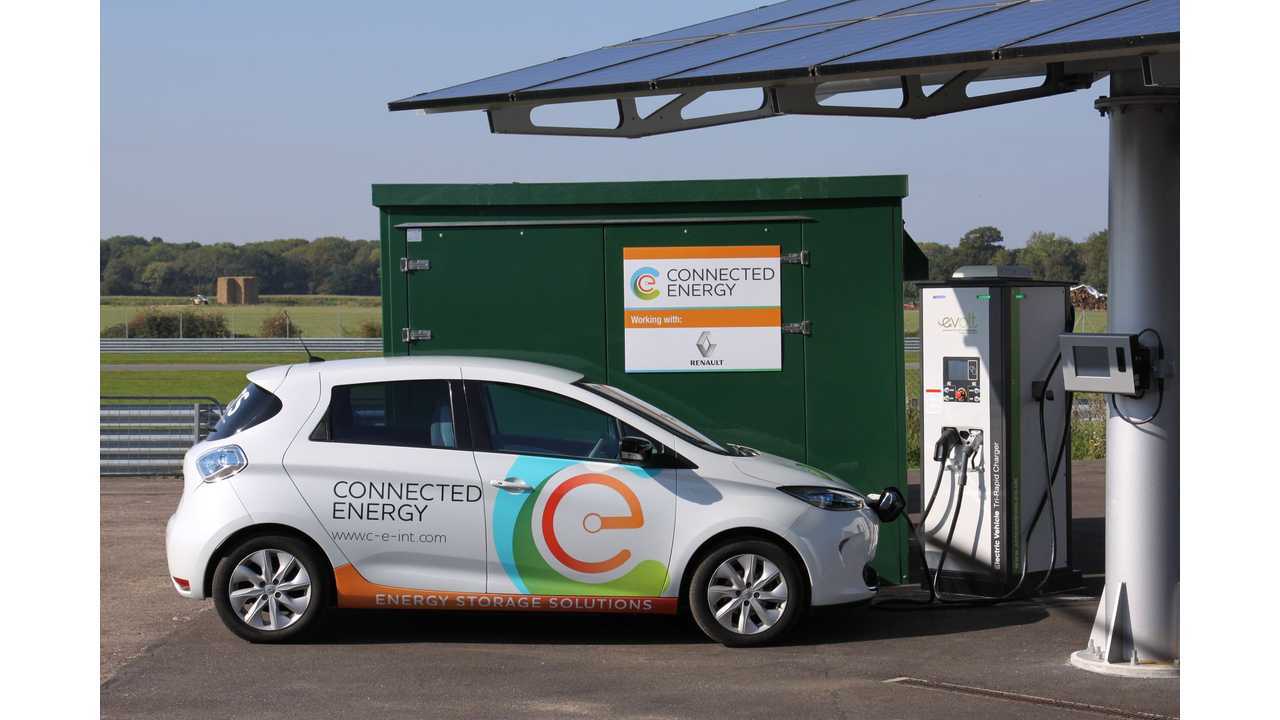 Renault established an important partnership with Connected Energy, who from July 2016 will offer in the UK the E-STOR (not to be confused with EEStor) energy storage systems with reused Renault EV lithium-ion batteries.

"At the end of their useful in-vehicle life, Renault EV batteries still have considerable remaining capacity, which means that they can continue to give great service in other applications before they are ultimately recycled."

It's important to note that typically Renault is selling electric cars without batteries, because batteries are rented to end-customers with warranty of at least 70% capacity. Renault owns the  batteries and as the capacity fades in older models, energy storage is way to go.

"Through its award-winning E-STOR technology, Connected Energy is offering a highly innovative solution to this conundrum through use of ‘second life’ EV batteries.

This can be used, for example, to store energy generated from on-site renewable generation resources such as solar panels and wind turbines, and then release it as it’s needed at a later time. The system also allows the batteries to be charged via low-cost off-peak electricity tariffs, enabling users to reduce their energy costs.

The batteries used are Renault EV batteries, chosen by Connected Energy because Renault, as EV market leader with 23,000 units sold in Europe in 2015, has expertise in the technology, its lifecycle and impact on the environment.

The first E-STOR product is nominally rated at 50kW/50kWhr which could typically be used to support one rapid charger or a cluster of fast chargers but the system is fully scalable and higher capacity units will follow.

In practical terms, as well as allowing more efficient use of energy, the system can also enable installation of rapid electric vehicle charging in sites where electricity supply would traditionally only allow slower rates. Instead of charging vehicles via a high-capacity supply directly from the grid, E-STOR allows multiple batteries to be charged at a slower rate over a period of time, ready to release their energy and charge a car when an EV driver needs it.

Renault offers two concrete solutions with its electric vehicles and their batteries through E-STOR. First to the grid, by providing energy storage that prevents power grid overload and balances supply and demand. Second to the environment, because batteries not fitted for automobile use, but that still have considerable remaining capacity, can have a longer life and lower carbon footprint before they are actually recycled.

“E-STOR will enable the more cost-effective roll-out of electric vehicles in commercial and industrial settings, thus increasing the overall sustainability of this clean form of transport.    With Renault we have secured the supply of second life batteries for future E-STOR installations.”

"The second life application of Renault electric vehicle batteries supports Renault’s commitment to the energy transition in the automotive industry. Through E-STOR, EV owners can charge their car at reduced costs with electricity that is less carbon-dependent. It makes driving an EV a smart and even more sustainable transportation solution. With this energy management technology, EVs and their batteries become an asset for the grid rather than create overload.”