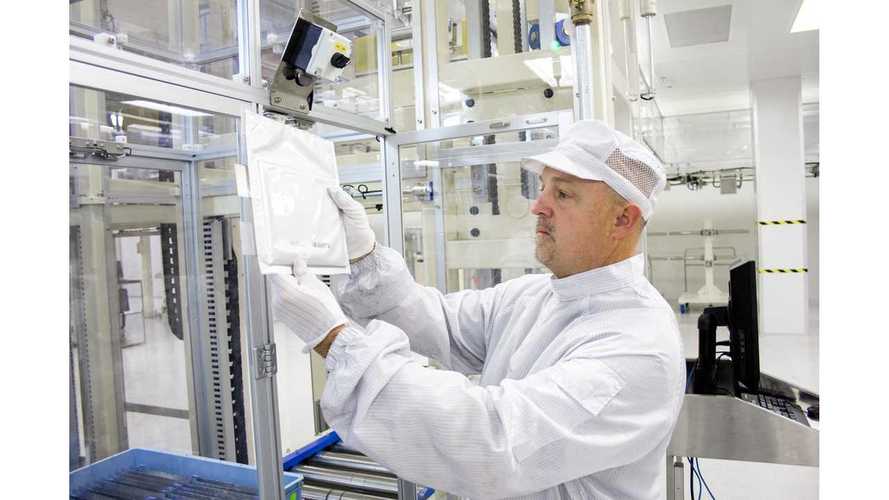 LG Chem Michigan doubled its workforce at its lithium-ion cell manufacturing in Holland, Michigan to over 300 people and boasts of high quality. But more people are still needed as the company notes growing demand.

LG Chem's cell factory groundbreaking was made in July 2010, but the actual production of batteries for the Chevy Volt began there in November 2013.  To date, a total of more than 23 million cells for the Volt have been produced (at the beginning, cells were made in South Korea).

The Korean company will supply cells for new 2016 Volt, but most of us are now excited by $145/kWh price-point cells for GM's long range Chevy Bolt (that unfortunately are not being built in Holland). Cooperation between the two heavy weight partners is only getting stronger.

"That story got a boost this week when automotive and technology journalists from around the country gathered at LGCMI for an inside, up-close look at the inner workings of the fastest-growing EV battery plant in the U.S. The $303 million plant supplies battery cells for the 2016 Chevrolet Volt (Gen 2), and now with additional production equipment and over 300 team members it also has near-term plans to produce for energy storage systems and other automotive customers."

"The conversation about lithium-ion battery manufacturing in North America isn't about what's going to happen in the future, it's about what's happening today. High quality, affordable electric vehicles are today's story and we are very excited to be a part of it."

"What we have seen in terms of quality from LG Chem is comparative to pharmaceutical levels of performance. Of the more than 23 million cells that have been produced for the first-generation Chevrolet Volt, we have seen less than two problems per million cells produced."

The high quality of LG Chem batteries are proven by "less than two problems per million cells produced" and no noticeable range drop of the 2011-2012 Volts.

While we don't doubt LG Chem or the Volt's performance, we must note that Volts (especially early versions) had pretty narrow state-of-charge windows available for use - and that also adjust over time as the cells deplete, which makes it impossible to compare long-term cell performance directly with most of the competitors. The battery is liquid cooled too.

"The performance of the cell technology developed between GM and LG Chem is among the best in the industry. Early Volt owners are still enjoying exceptional battery range performance.  Based on a GM study of more than 300 model year 2011 and 2012 Volts in service in California for more than 30 months, many owners are exceeding the EPA-rated label of 35 miles of EV range per full charge.  About 15 percent of the owners studied surpassed 40 miles of range."