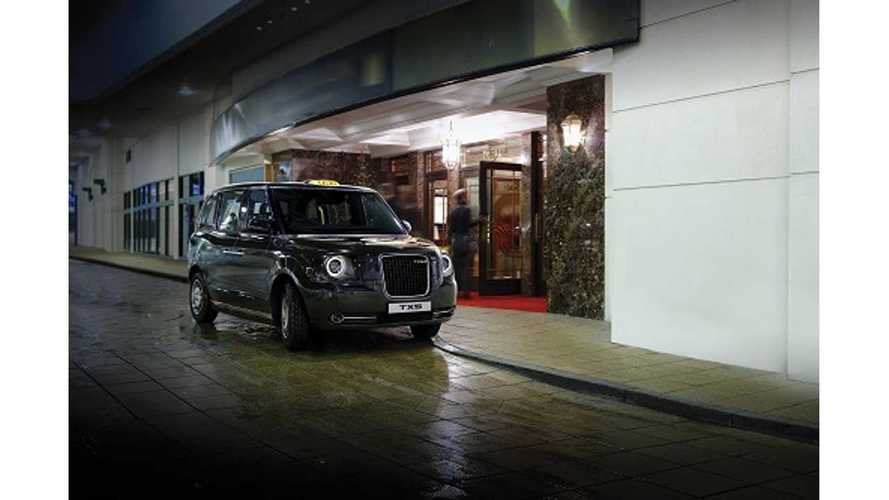 The London Taxi Company (part of Geely) announced a plug-in hybrid taxi about two years ago.

Now, the first prototype of the all-new TX5, modern Black Cab, was recently unveiled and is scheduled for production in 2017 for the UK, and then for international markets in 2018.

TX5 has all-electric/zero emission capability, but LTC has not disclosed any specs yet.

What we do know, is that the aluminum body structure lowers the weight, and that 2,000 all-new components were designed from the ground up.

"The TX5 design concept captures the spirit of past generations of LTC models such as the Fairway series and draws on more than sixty years of style that has made the Black Cab an iconic sight on the streets of London. While maintaining recognisable key features, the new zero emission capable TX5 has been updated to reflect the needs of today’s passengers and the move towards a low-carbon economy. The prototype of the new model was unveiled in the presence of the Chinese President Xi Jinping, who is on a four-day state visit to the UK, and the Duke and Duchess of Cambridge."

"The TX5 has been designed with an overriding focus on the comfort of passengers and drivers. As well as accommodating six passenger seats and featuring improved driver leg room, the TX5 also heralds the return of the rear-hinged door to improve passenger access and, for the first time on a Black Cab, a panoramic glass roof. It has sufficient space for a forward facing wheelchair, helping to meet the travel needs of those with mobility issues. The TX5 is also equipped with WiFi internet capability and provides charging points for drivers and passengers in line with London’s reputation as a hub for tech innovation and connectivity on-the-go."

Chinese automotive manufacturer Zhejiang Geely Holding Group, a parent company to LTC, announced its intention to invest an additional £50 million ($77 million), to total £300 million, in its production facility in Ansty, Warwickshire, turning it into the group’s UK R&D headquarters.

Whatever plug-in drive they develop, we probably can assume it will be offered globally.

"At 31,000 square metres, the Ansty facility will now be 50% larger than originally planned to accommodate the enhanced R&D centre and additional technical facilities alongside the production line to build the new TX5. In addition there will 6,000 square meters of office space."

“We will have invested many years of development and more than £300 million in bringing the TX5 to market. This is testament to Geely’s commitment to the UK and The London Taxi Company, and demonstrates our leading position on new energy technologies, our loyal and talented workforce and our competitive edge when it comes to delivering pioneering design and technology. At the same time we are happy to play a part in furthering Sino-Anglo relations by investing in the UK and strengthening business and governmental ties between the two nations”.

“We are hugely excited to be unveiling the TX5 prototype design for the first time and in such high company. The new vehicle has a wealth of new features, which will all be tried and tested and then tested again to provide a perfect balance of timeless design driven by ground-breaking technology”.