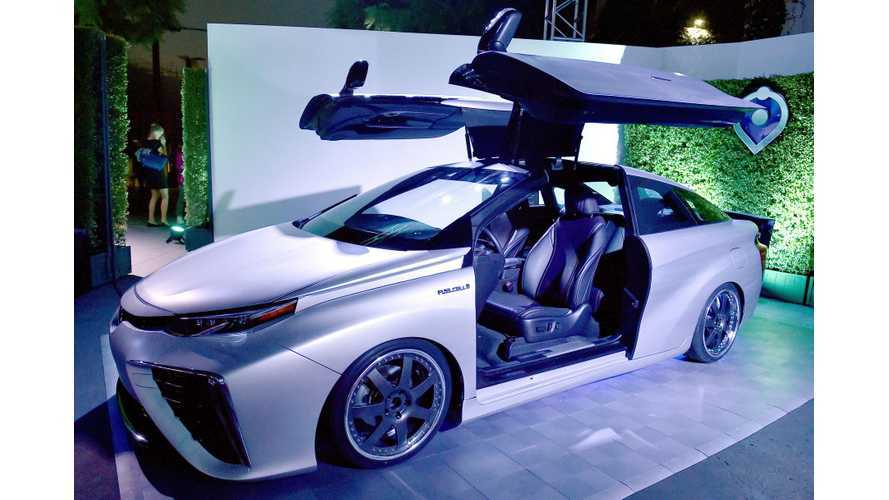 Toyota tied its U.S. Mirai sales launch in with the “Back to the Future” anniversary. Not without a reason as Mirai in Japanese means Future.

With over 2,000 "trailblazers", who placed order requests for Mirai, it was the right time for launch.

We are not sure how many Mirai were sold/delivered, but probably only a few?

"Movie magic sometimes turns into technological reality. Last night more than 300 new Toyota Mirai owners, Mirai dealers and special guests watched actors Michael J. Fox and Christopher Lloyd bring a famous trash-into-fuel scene from “Back to the Future Part II” into the present. The occasion: a celebration to mark the U.S. arrival of Toyota’s Mirai hydrogen fuel cell vehicle — a modern, real-life version of Doc Brown’s trash-fueled technology. The “Fueled by the Future” video debuted at the event is the last in the “Fueled By Everything” online video series demonstrating hydrogen fuel’s potential to be sourced from almost anything, including solar, wind and trash.

Today marked the official on-sale date of the Mirai, the same date that was “the future” in the storied Universal franchise. More than 2,000 people so far have requested to buy a Mirai in California, where it is first available. The party celebrated those trailblazers with food, décor and conversation inspired by the “Back to the Future” vision of 2015. New owners representing each of the dealership locations in Southern and Northern California received ceremonial keys. They will be behind the wheel soon.

“A piece of the future is now a reality with the Toyota Mirai,” Lloyd said. “Compared to some other technologies predicted in the film, like rehydrated pizza or self-tying shoes, this technology has the real potential to change the world.”

“Back to the Future” films will be in theaters on October 21 only and also available in a new Blu-Ray and DVD box set. While drivers can’t exactly throw soda cans and banana peels into the Mirai fuel tank and expect to cruise the roads of California, organic waste can decompose and produce biogas at landfills. This gas can be purified into and converted into hydrogen for fuel. The only emission from the Mirai’s tailpipe is water."

“This moment celebrated the intersection between the U.S. arrival of the Mirai and the 30th anniversary of an iconic film. We were thrilled to mark the occasion with a video featuring the film’s original stars Michael J. Fox and Christopher Lloyd, reminding our first Mirai owners that they will be driving a future we could only dream of 30 years ago.”

Back to the Future Mirai Concept

Also on the scene was a new Mirai concept with gullwing doors, sort of resembling the DeLorean.

Back to the Future Mirai Concept lost its rear doors too.

It's really stunning how much marketing effort Toyota has put into Mirai, especially compared to weak effort seen by most electric car manufacturers.

At the same time Toyota notes just marginal sales (the plan is for 700 Mirai this year, 2,000 in 2016 and 3,000 - worldwide). Even in 5 years, planned Mirai sales will be lower than Nissan LEAF and Tesla Model S today, which leaves us without an answer on return on investment.

"Also on-hand at the event were two exclusive “Back to the Future”-inspired vehicles. The first re-imagined Doc Brown’s time machine as a customized Mirai, complete with gullwing doors and a heads-up display of the time-traveling destination. The second was a re-creation of Marty McFly’s dream truck using the all-new 2016 Toyota Tacoma that went on sale in September. The tricked out truck is a fan-favorite in the “Back to the Future” trilogy and a natural movie connection for Toyota. Fans in Los Angeles, New York and Dallas today can see that truck in major tourist destinations."