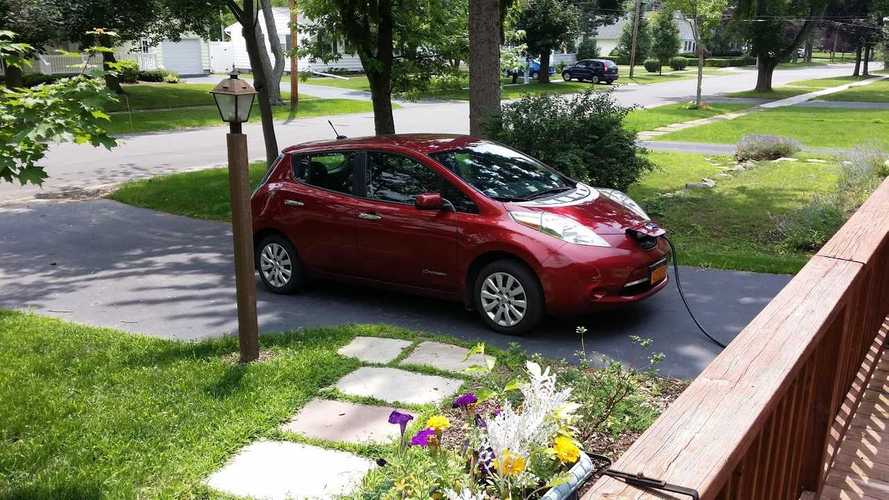 Chapter 1 of the textbook on electric vehicles clearly states that they're not to be used for long trips. With ranges anywhere from a meager 70 miles for low end models to an impressive but still limited 265 for Tesla's flagship Model S, vast stretches of American highway appear to be out of reach for EV drivers.

Know A Spot For Brian To Plant A Tree In Your State? Perhaps Drop Him A Line (details below)

Tell that to Norman Hajjar.

Hajjar's 12,000 mile jaunt back and forth across the country last year planted an solid asterisk on that rule. His average of over 665 miles a day for the better part of three weeks begs what may appear to be an outlandish question, "How far do we really need to drive?"

For one EV driver the answer seems to be, further than that.

Brian Kent lives in rural Upstate New York and has spent the last year and a half putting 25,000 miles on a 2013 Nissan Leaf he picked up in Virginia in the middle of December 2013.

He plans to put another 25,000 miles on it in the next three or four months. Recently, we talked to him in the midst of what he called, "quite a bit of planning."

*Editor's Note:  Our thanks to Brian for getting in touch with us and giving us this recap of what is happening on his trip

Ok, first off, what is it that you're doing?

I plan to drive through the contiguous 48 States and plant a tree in every one. In an all-electric car. A Leaf.

It is if you route the trip through all of the capitals and make sure you see the sights.

I just think of myself as the little train that could. I relate to that story. I think the thing that makes me saddest is when people don't see the potential around them. The potential in themselves. I see these beautiful stories we could write about our lives if we'd only just walk right out that front door and do it. That's how I'm going to live my life. So that's why really. Just because I can. Because the car can, really.

The Task At Hand

How do you know it can?

Well the car speaks for itself. It's amazing, I love the car. I mean, my last car was a 1999 Honda Civic DX so it was gonna be a tall order to replace it. That Civic was still going great after 208,000 miles and getting 37-38 mpg most of the time. I thought, "How am I going to beat that?" And the Leaf does. I drive it more, it's less expensive, and it jumps off the line like it got stung by a hornet.

This Was Going To Be A Gloriously Framed, Artistic "Green" Photo Opportunity...Then An Unholy Amount Of Mosquitos Arrived And Trapped Us All Indoors For The Rest Of The Day

Well how do you know you can? Have you ever done anything that takes that kind of endurance?

A few things. I've driven over a thousand miles at a stretch three or four times. Once almost two thousand miles. It's harder doing it in a gas car than it is in an electric though. Much harder. I've driven the Leaf over three hundred miles in a day a bunch of times, and yeah it takes longer but it's easier. Off the lot I had to go several hundred miles through desolate country in rural Pennsylvania and New York in the middle of a pretty unpleasant winter. I've also made two 700 mile round trips to New York City in the last ten or eleven months. Had to make the Climate March last September. I'll miss it this year/ It's looking like I'll be in Tennessee.

But what's with the trees?

Well, that's about putting it back. No matter what kind of car you drive, you're still going to be producing some carbon pollution. Sure, with EVs it's much less, but there's still carbon emissions from manufacturing and energy production for example. Trees are pretty good about putting it away, and it's really not that hard to plant one. There isn't even much controversy there. I mean, who thinks we shouldn't plant some trees?

Well right, but do you have any experience in it?

Not much, really. The way I look at it, that makes me an excellent example: if I can do it, who can't? I do have a couple Aces-in-the-hole though.

Well, my uncles are both seasoned foresters, my middle brother is a recognized expert in landscape management, my eldest brother is an engineer in the automotive industry, and my father has been planting oaks from acorns for about as long as I've been alive. There's some expertise I can tap. But I mean, there's always people you can ask. You just need to be willing to ask for help.

How are you going to make sure they live after you plant them?

Someone asked me that, and it's a tough question. But I've got a tougher one: "How are we going to make sure we live if we don't start doing things differently?" We've got to help one another, don't we?

What kind of help do you need?

A Facebook like maybe. Or write me an email. The encouragement really does go a long way, and I respond to all my messages. I might even hit you up for a place to plug in along the way.

It seems like someone else didn't get the memo about what electric vehicles can't do.

You can find Brian's trip here on Facebook, and here on Indiegogo.  We will be interested to see how this one works out and will be posted updates throughout the journey here at InsideEVs.