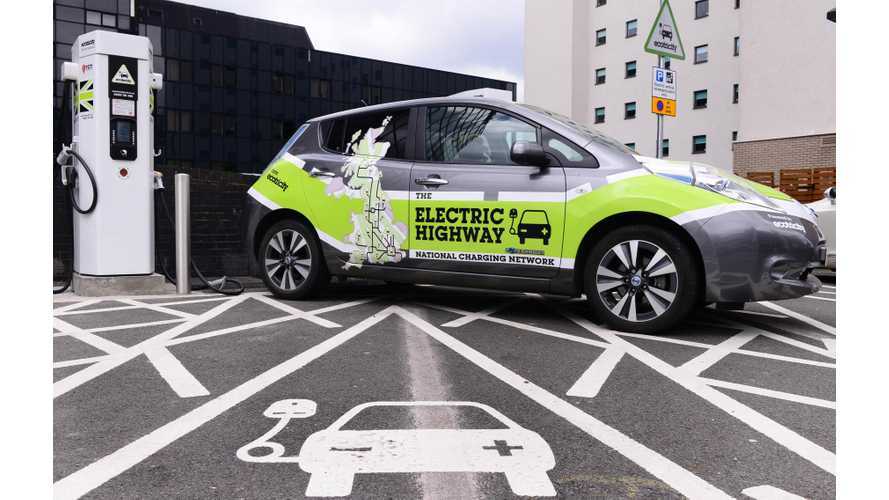 Two companies engaged in EVs in UK - Nissan (who has sold over 11,500 LEAFs) and charging infrastructure provider Ecotricity - called on the government for official EV charging point signage.

Despite more than 9,000 public charging points, there is no official road signage. The need to identify these charging sites is definitely there, yet no signs exist.

As a side note, Nissan provided us with the odd signs to watch out for the very-rare helicopters and tanks on roadways (below right). These are actual signs that do exist on public roadways, yet signage for electric car charging points are rare.

A similar problem remains unsolved in most countries.

"Nissan and Ecotricity claim the time is right for the new UK Government to take action and raise awareness of the UK’s EV infrastructure by introducing universal symbols that can be used to designate the different types of EV charging points available on Britain’s roadways, notably standard and rapid chargers.

The campaign will be calling on key influencers in the motoring and sustainability sector to share their views on the UK’s electric vehicle charging network in order to encourage the Department for Transport and Office for Low Emission Vehicles to take action."

“At Nissan we believe that all electric driving offers a number of benefits to UK motorists and should be made accessible to all. That is why we have partnered with Ecotricity to call on the new Government to give electric vehicles the prominence they now deserve and introduce official signage for charging points across the UK.”

“Both the cars and the infrastructure are in place to support the electric car revolution in Britain – there are Electric Highway pumps at almost every motorway services, while companies like Nissan are developing top quality electric cars.

“It’s time to introduce charging point road signs in Britain – they’ll provide necessary direction for the thousands of electric car drivers in Britain as well as increasing public awareness that the infrastructure is ready for them to make the move to an electric car.

“Over the past four years, we’ve installed Europe’s most advanced electric car charging network right here in Britain – it has 250 pumps, 20,000 members and over 10 million emission free miles driven since its inception.

“The growth so far in 2015 has been phenomenal – over a million miles driven on the network every month. The argument for road signs could not be stronger.”