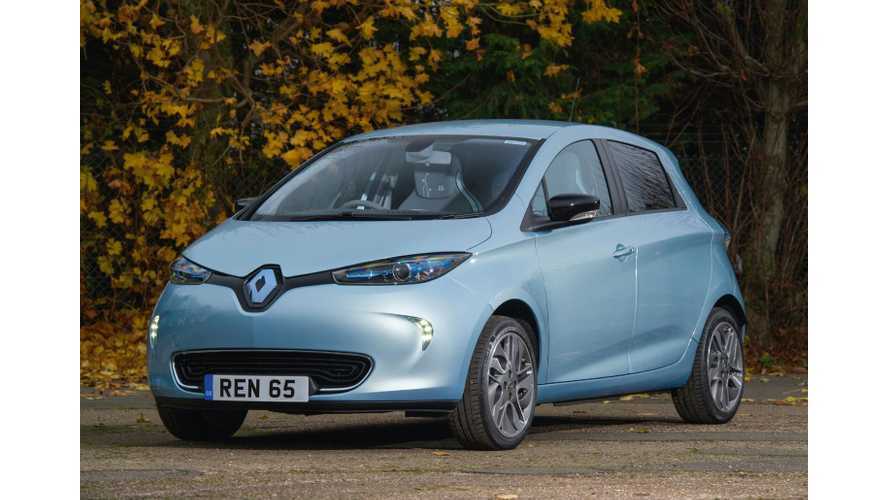 Together with the introduction of a new version of ZOE, Renault is updating trim levels of its EVs. In the UK, the names of the trims were changed to be in-line with combustion-engined vehicles in uniform grading structure.

Renault ZOE, as announced earlier this year, will be available in Europe in both old and new version, which differ mainly by the drivetrain.

In the first half of 2015, Renault sold in the UK 949 EVs, out of which 767 were ZOE. For the sake of comparison, Nissan delivered nearly 3,000 LEAFs in that period, but new ZOE 240 could reduce the difference.

"In an increasing electric vehicle market in the UK that was up 83.0 per cent in the first half of the year compared to 2014, sales of Renault’s electric vehicle range, comprising of ZOE, Twizy and Kangoo Z.E., rose by 145.9 per cent across the same period, with 949 EVs sold. ZOE contributed strongly to this performance, with 767 examples of the all-electric hatchback being sold – a 244.0 per cent increase on the first six months of 2014."

Also Renault Twizy trims have minor changes to colors, wheels and new names (Expression replaces the former Urban and Dynamique takes the place of Technic). Third version is Cargo with a single-seat and trunk.

"Renault has updated the trim levels of two of its three electric vehicles on sale in the UK – the ZOE supermini and urban Twizy – to bring them into line with the company’s combustion-engined vehicles and create a more uniform grading structure across all the brand’s models.

A comprehensive array of technology is standard in order to make ZOE as efficient as possible – the Renault Range OptimiZEr range-extender (heat pump, regenerative braking and Michelin ENERGY E-V low-friction tyres); the Renault Chameleon™ charger allowing the battery to be replenished in one to nine hours and adapt itself to always extract the most charge from any charging source, an ECO mode, a Z.E. Connect remote battery monitoring, Z.E. Voice low-speed pedestrian alert, a TFT display with a trip computer and driving style indicator, battery charge indicator, econometer and range indicator.

Renault is continuing to offer ZOE customers a 7kW charging wall box supplied and installed free of charge at their home. This means a charge time from zero to 100 per cent full in 3-4 hours.

Dynamique Nav Rapid Charge is identically equipped but can be recharged to 80 per cent of capacity in just 30 minutes through a 43kW charge point.  The official NEDC range is 130 miles, which translates to a ‘real-world’ range of around  64 miles in cold weather and 93 miles in temperate conditions.

All three grades of ZOE are available to buy as either battery hire or full purchase ‘ZOE i’ versions.

All our own work – Renault’s class-leading new motor

The R240 motor, engineered by Renault over an eight-year period and manufactured at the company’s Cléon factory in Normandy, extends operating range by almost 15 per cent to a class-leading 149 miles in the New European Driving Cycle. It gives ZOE a real-world range of 71 to 106 miles, depending on driving style, the use of electrical features like air conditioning, the season and where the car is being driven. It is fundamental to Renault’s strategy of improving the range and performance of electric vehicles by advancing battery and motor technology.

It features integrated rather than stacked modules, with reduced gaps and no external power cables so that it is more compact. It also has a simplified air-cooling system and a three-in-one junction box incorporating the Chameleon™ charger and power electronics to form a single unit called the Power Electronic Controller. In the R240 motor this is the only part which is water-cooled.

The result is a 10 per cent reduction in size with no loss of performance, and with reduced energy consumption and faster charge times. This makes it especially suitable for use in smaller cars. The Chameleon™ charger has also been reworked for use with the R240 motor.

Both motors develop a maximum output of 65kW (88hp) and near-instantaneous maximum torque of 220Nm available in less than one-hundredth of a second. They deliver identical driving performance, with 0-30mph attainable in around four seconds and 0-50mph in 8.6 seconds.

The decision to offer two motors comes about because Renault has identified distinct types of use among its EV customers. Many have regular driving patterns, and will therefore appreciate the increased range and reduced charging requirements with the R240 motor. But others are less predictable in the way they use their car. For them, ultimate range is usually not a handicap – but they need the ability to rapid-charge to 80 per cent of battery capacity in the shortest possible time on occasions.

In an increasing electric vehicle market in the UK that was up 83.0 per cent in the first half of the year compared to 2014, sales of Renault’s electric vehicle range, comprising of ZOE, Twizy and Kangoo Z.E., rose by 145.9 per cent across the same period, with 949 EVs sold. ZOE contributed strongly to this performance, with 767 examples of the all-electric hatchback being sold – a 244.0 per cent increase on the first six months of 2014.

For Twizy, Expression replaces the former Urban version and Dynamique takes the place of Technic in the line-up while the Cargo remains unchanged. There have been minor changes to colours, trims and wheels.

Dynamique supplements this with 13-inch Diamond alloy wheels in Gloss Black, Flame Orange or Urban Blue and a choice of 14 two-tone colour collections for the wheel arches, seat covers and mirror housings.

The Cargo version of Twizy dispenses with the rear seat, expanding the carrying capacity to 180 litres with a lockable storage area – sufficient for commercial applications such as urban area deliveries or for carrying equipment or tools."

ZOE PRICING (On The Road, after Government Plug-in Car Grant)

TWIZY PRICING (On The Road)