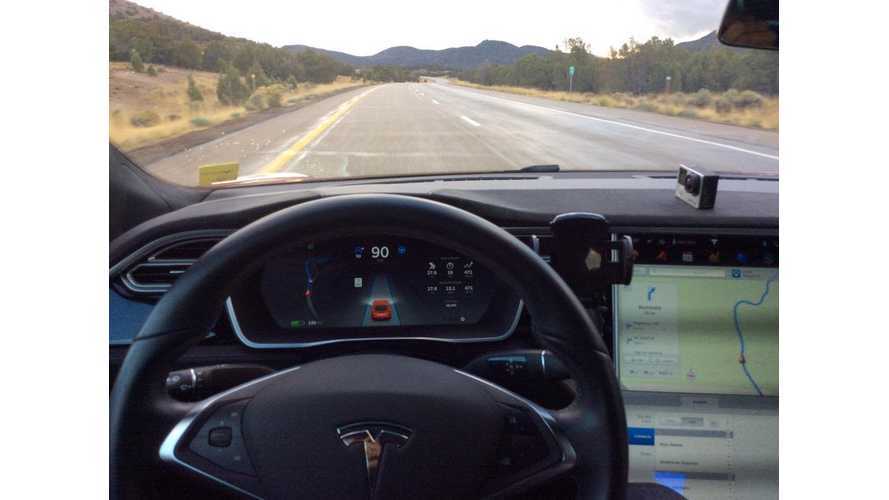 Rally driver Alex Roy is famous for driving a highly-modified BMW M5 across the US in a record time of 31 hours and 4 minutes in 2006. He chronicled the years of preparation that led up to the successful attempt at the “Cannonball Run” in his book, "The Driver: My Dangerous Pursuit of Speed and Truth in the Outlaw Racing World."

Roy just made the “Cannonball Run" across the country again to set two new transcontinental records. This time, in a Tesla Model S P85D. But instead of Roy driving the car, the car, equipped with Tesla’s Autopilot, drove him. Well, the car drove itself with the help of Roy and two others, Carl Reese and Deena Mastracci, who are also transcontinental driving record holders.

The trio departed the Portofino Inn in Redondo Beach, California two and a half days ago and arrived at the Red Ball Garage on East 31st Street in New York City around 10:30 this morning and recorded a time of 57 hours and 48 minutes. They claim to have set the fastest time to cross the country in an autonomous driving car and broke the existing record for fastest crossing in an electric vehicle.

Editor’s Note:  Our thanks to Lanny Hartmann for penning this article for us.  Lanny runs PlugInSites.org, a website that delivers news about electric car charging stations in DC, Maryland, Virginia & beyond.  We encourage readers in the area to check it out!

In April, 2015, Reese and Mastracci, along with Rodney Hawk, drove Reese’s Model S 3,011 miles from LA to New York in 58 hours and 55 minutes. They are listed in the Guinness World Records as having the least non-driving time to cross the United States in an electric vehicle at 12 hours, 48 minutes and 19 seconds. This beat the official record set by a team of Tesla employees dispatched by Elon Musk in early 2014 when the Supercharger network was established to the point that would enable a Tesla Model S to drive coast to coast exclusively using Supercharger stations.

A clue that this record attempt was in progress came when @AlexRoy144 tweeted, "What Is The Level 2 Autonomous Driving Record? Enquiring Minds Want to Know. #Tesla #Autopilot."

A Portion Of The Route - Image Credit: Alex Roy

According to the National Highway Traffic Safety Administration (NHTSA) proposed classification system, a Level 2 automated vehicle system has at least two controls that can be automated in unison, such as adaptive cruise control and lane keeping.

Deena Mastracci, who stayed behind the wheel for much of the trip, said the Tesla Autopilot performance was "stellar."

"Should we stop for massages since we're so far ahead of schedule?" #TakeAGuessAsToMyAnswer

In recent years, Guinness has no longer recognized time-based records conducted on public roads, so both records may remain “unofficial” by Guinness standards.