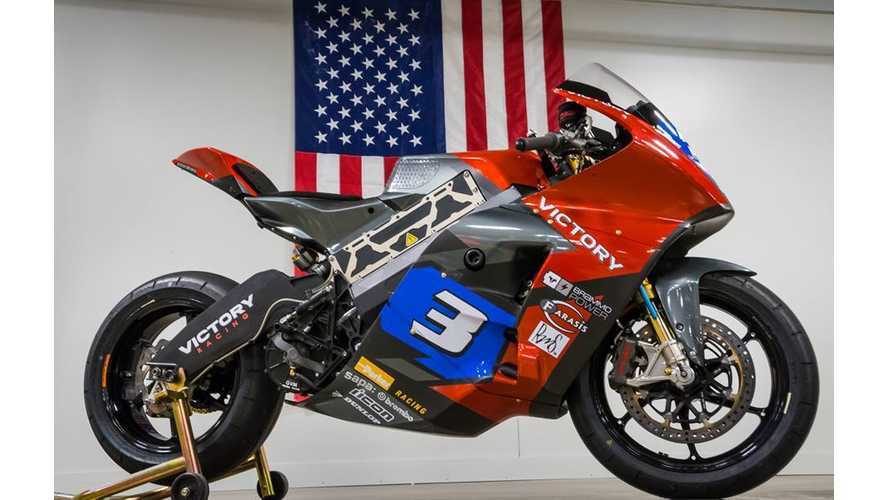 In what has got to be one of the strangest twists in a long, strange history of strange twists from Brammo, the Victory "prototype" Brammo RR bike that placed 3rd at the 2015 IOM TTZero has apparently been stolen from Brammo headquarters in Talent, OR.  Here's the post on the Victory Facebook page:

VICTORY HISTORY HAS BEEN STOLEN.

The historic Isle of Man TT racer piloted by Lee Johnston Racing was stolen overnight from Brammo Headquarters in Talent, OR.

The motorcycle was on display with its complete race bodywork, as shown in the images. Johnston's Racer #3 was on this particular machine.

Brammo HQ, (as Walmart) Talent OR

The Frame VIN is stamped #004 and there is a $1000 reward for information leading to the recovery of this historically significant motorcycle. Individuals with information or who feel they may have seen this motorcycle should contact: INVESTIGATING OFFICER: BILL MAY, CASE# 15-2149, at the Talent, Oregon Police Department at (541)535-1253

The teams from Victory and Brammo are gutted that thieves made off with this important piece of motorcycling history, and appreciate the diligence and assistance of motorcycle enthusiasts across the country. We request in particular that those in the Pacific North West be on the lookout.

Via the Mail Tribune story, it appears that the break-in happened sometime between Thursday evening and Friday morning. "A Brammo employee discovered the bike was missing at about 7 a.m. Friday, according to Chief Mike Moran."

"There were some indications of force used to enter the building," Moran said, adding that specifics on how suspects got in and left with the bike were still under investigation. "It appears that the bike was the only thing taken."

Speculation is unavoidable, but there are a few things that are clear.  The bike has value only to a few - historic value, for sure - personal value, without doubt to team members and Brammo top management - parts and intellectual property value only to competitors or those trying to sell information to competitors - or value in some way to disgruntled ex-employees, of which Brammo has its share - where publicly embarrassing Brammo would be the main objective.

UPDATE:  This just in from the Talent, OR. Police Dept:

On July 19, 2015 the Talent Police Department received information that the Stolen Empulse RR Race Bike valued at $250,000 was at a residence in Talent

Based on the information received a Search Warrant was done at the 100 blk of 3rd Street in Talent around 2000 hours.

The Motorcycle was recovered and two subjects were arrested for this incident.

Michael Joseph Manring age 23 was lodged on charges of Aggravated Theft I and Burglary II.

Juan Vega -Nunez age 24 was lodged for Conspiracy to Commit Theft I and Burglary.

Victory also offered a press release, minutes later, with a lot of the usual PR blather, but this as well:

The Talent Police Department worked the case aggressively throughout the weekend and were able to get information on the bikes whereabouts by late Sunday afternoon. A warrant was served for a rental residence ending in the custody of two individuals. The main suspect, who has a long history of run-ins with law enforcement, told police he intended to disassemble the bike and sell the parts, though nobody has admitted actually breaking into the Brammo headquarters where the race bike was on proud display.

No current or former Brammo Inc. employees have been implicated in this case.

“Everyone at Brammo are relieved to have bike #3 back in the stable and are extremely grateful to the City of Talent Police Department for working diligently to solve this case.  We'll need some time to fully assess any damage done, but from initial inspection it appears mostly cosmetic and repairable. What a bizarre event this has been. Thank you to everyone that shared the story and participated indirectly in the recovery.”   Brian Wismann – Director of Product Development, Brammo Inc.