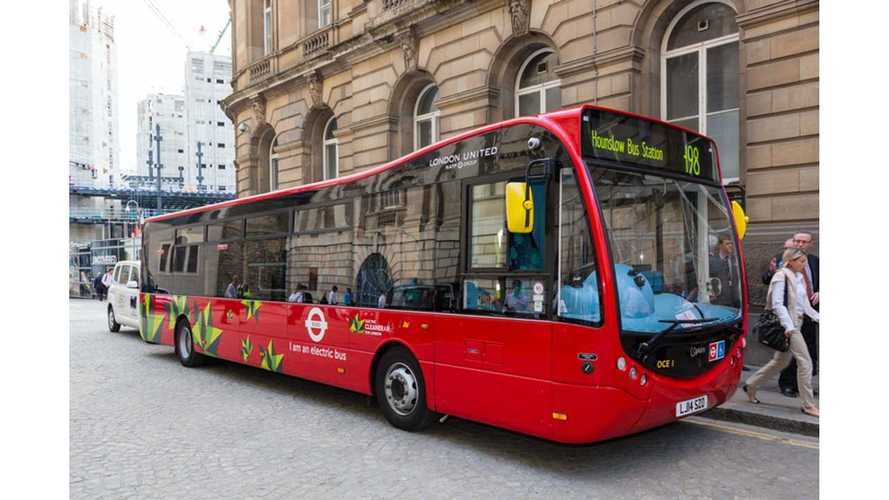 Transport for London has announced that its 507 and 521 bus routes will be entirely electric with 51 new electric buses starting in  Autumn of next year.

That's a huge project. The first EV route is the 312, which will turn fully electric later this year. Electric buses are used on other routes together with diesel or hybrid buses.

Year 2016 should close with just under 100 EV buses in service, while by 2020 there will be even more electric buses:

"The 5-year contract to operate the routes has been awarded to Go Ahead following a competitive tender process, and will mean that 51 electric buses will operate across the two routes that will become the second and third pure electric bus routes in the Capital. Go Ahead will confirm which manufacturer will supply the buses in due course. By 2020 all 300 single deck buses operating in central London will be zero emission (either electric or hydrogen) and all 3,000 double deck buses will be hybrid."

Double decker buses could be electric instead of hybrid and BYD will begin testing of such vehicles in October.

The Deputy Mayor of London for Environment and Energy, Matthew Pencharz, said:

"The expansion of London's electric bus fleet demonstrates our commitment to reducing emissions from public transport in London. The Ultra Low Emission Zone that will be introduced in 2020 is the most ambitious measure of its kind taken to tackle air pollution anywhere in the world, and it will transform our bus fleet into a cleaner, greener and more pleasant way of travelling for Londoners."

"TfL has always been at the forefront of deploying new, green technology in order to reduce harmful emissions from its bus fleet. I am delighted to announce that two further routes are to convert to fully electric operation - giving our passengers a quieter, smoother journey and also delivering significant environmental benefits. Electric buses represent another important step in our ongoing efforts to reduce emissions, significantly improving air quality in the Capital."