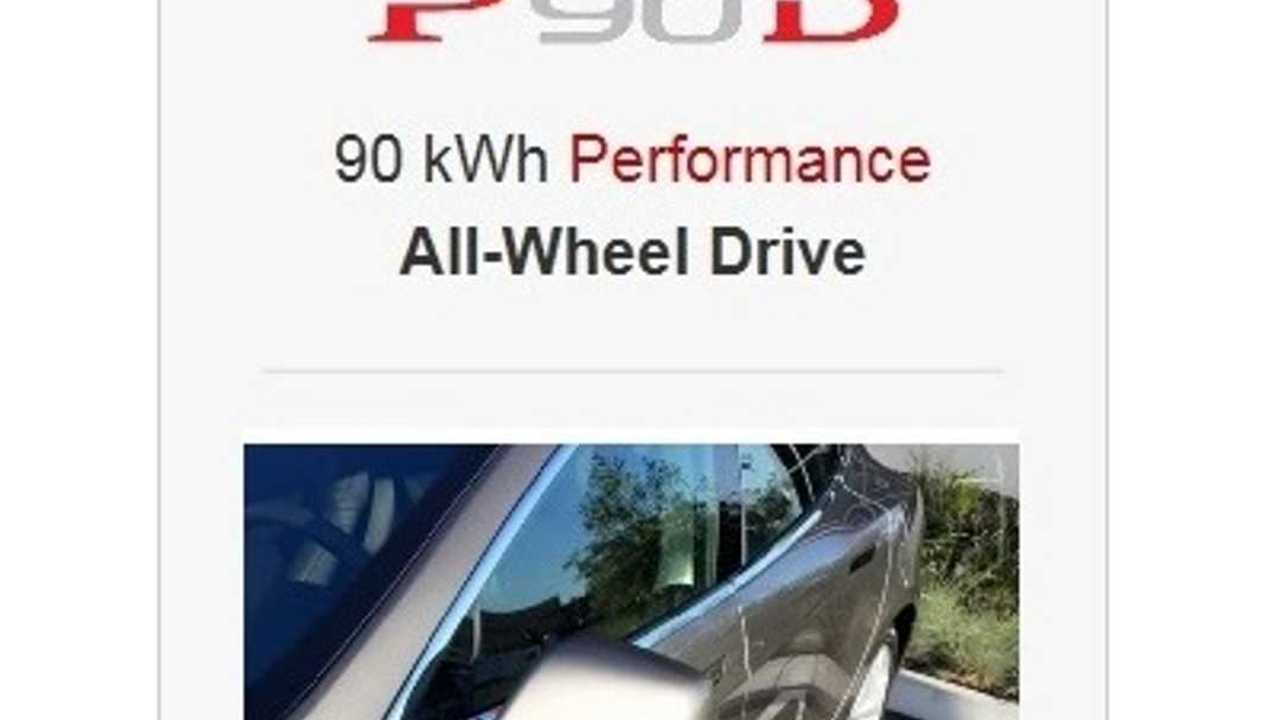 Look For P90Ds On The Road Soon!

The most significant was the arrival of a 90 kWh battery pack upgrade option ($3,000) for new customers, to better suit the Model S lineup, given the recent update of the base model to 70 kWh over the older 60 kWh version.

And finally, "Ludicrous Mode" is now a real thing - for $10,000 more; which means that the top-of-the line performance Teslas can now zip to 60 mph in 2.8 seconds.  The new mode also brings up the quarter mile in 10.9 seconds.

Unlike earlier performance upgrades that have been done over-the-air, there is actually new hardware needed for this upgrade.  This means a $10,000 outlay for new buyers, $5,000 for current P85D owners (at least for the next 6 months in consideration of their costumer's recent, and already somewhat outdated, purchase).

Update: There has been some reporting confusion in the media surrounding whether or not current 85 kWh Model S owners can also get their battery upgraded to a 90 kWh pack, and what that cost might be.  As we understood it, no such option was being offered, so we reached out to Tesla for clarification and was informed via a spokesperson that "You cannot retrofit the battery pack. Only retrofit is available to P85D customers is the ludicrous mode."

Which basically means that existing 85 kWh Model S sedans can have their packs replaced with a new 90 kWh pack featuring the new improved chemistry, but not the old unit itself upgraded for the $3,000 fee and then retained (we assume a residual trade-in value would be placed on and given for the original pack).

Hence the statement from CEO Musk stating that he "wouldn't recommend doing so (upgrading to 90 kWh) unless your usage is on the edge of current range."  While adding, "On average, we expect to increase pack capacity by roughly 5% per year. Better to wait until you have more time on your existing pack and there is a larger accumulated pack energy difference."

Of course Tesla tweeted out a little brag on the new high performance P90D Model S from $118,000:

Ludicrous Mode Arrives? Next Up Is Obviously "Plaid"

...which apparently irked someone in legal and/or another car company, as the tweet was re-worded a couple times before landing on this configuration:

Tesla also got in on the Space Balls move joke about "going to plaid", but they did it in such a way as to promote an all-new Roadster available in 4 years.

"There is of course one speed faster than ludicrous, but that is reserved for the next generation Roadster in 4 years: maximum plaid."

The "Fine Print" On 90 kWh Battery

During the press conference there was not much news around the upcoming arrival of the Model X other the re-confirming its deliveries to start in 2 months time.

The Tesla CEO did note that "Ludicrous Mode" would also be available on the performance X, and should give the utility vehicle a zero to 60 time of about 3.2 to 3.3 seconds.

For the Model 3, the latest update is that it is still off a bit more than 2 years.

Mr. Musk was asked what impact he thought these new options would have on sales going forward on the Model S:

"I have no idea, we are just trying to make awesome cars."

As for market reaction, shares dipped on the initial announcement, perhaps reflecting the markets desire to see 'bigger' news, but they quickly recovers and are now mostly unchanged.  (Real-time quote can be found here)

First, I should address something that might be on your mind, like: "Where the heck is the Model X and the Model 3!? You should really get on that." Don't worry, those remain our focus and good progress is being made on both. X is on track for first deliveries in two months and Model 3 in just over two years.

Now, on to the awesome news of today. New buyers now have the option of upgrading the pack energy from 85 to 90 kWh, which provides up to 15 miles of additional range. This takes our current longest range model, the 85D to almost exactly 300 miles of highway range at 65mph.

Existing owners can also purchase the pack upgrade, but I wouldn't recommend doing so unless your usage is on the edge of current range. On average, we expect to increase pack capacity by roughly 5% per year. Better to wait until you have more time on your existing pack and there is a larger accumulated pack energy difference.

We are now offering the 70kWh version of the Model S in the single motor version for $5k less than the dual motor, consistent with the price differential for the single and dual motor 85 kWh car. Importantly, enough options are now standard that you will have bought a great car even if you pick the base version. Various purchase incentives mean the actual net price is around $60k and annual gasoline and servicing savings are around $2k. These savings are captured immediately if you lease the car.

While working on our goal of making the power train last a million miles, we came up with the idea for an advanced smart fuse for the battery. Instead of a standard fuse that just melts past a certain amperage, which means you aren't exactly sure when it will or won't melt or if it will arc when it does, we developed a fuse with its own electronics and a tiny lithium-ion battery. It constantly monitors current at the millisecond level and is pyro-actuated to cut power with extreme precision and certainty.

That was combined with upgrading the main pack contractor to use inconel (a high temperature space-grade superalloy) instead of steel, so that it remains springy under the heat of heavy current.

The net result is that we can safely increase max amp throughout from 1300 to 1500 Amps. If you don't know much about Amps, trust me this is a silly big number of Amps to be going through something the size of your little fingernail.

This option will cost $10k to new buyers. In appreciation of our existing P85D owners, the upgraded pack electronics will be offered for the next six months at only $5k plus installation labor.

It is important to note that the battery pack size upgrade and the pack electronics upgrade are almost entirely independent. The first is about energy, which affects range, and the second is about power, which affects acceleration.

There is of course one speed faster than ludicrous, but that is reserved for the next generation Roadster in 4 years: maximum plaid.

MORE ON THE ANNOUNCEMENT

Model S already offers the highest possible safety ratings, the longest range of any EV, and over-the-air updates that continuously make it better. The performance improvements we're announcing today demonstrate, yet again, that an electric car can soundly beat any gasoline car on efficiency and pure performance.

Today's three new options give customers the ability to order the Model S for their lifestyle:

Model S with maximum range. Available as an option on all 85kWh Model S, the new extended range option gives customers the ability to order a 90kWh battery. The upgrade increases range on all 85 kWh Model S by 5%.

Ludicrous Speed decreases the 0-60 mph time for Model S 10% to 2.8 seconds with a quarter mile time of 10.9 seconds. Time to 155 miles per hour is now 20% faster than a standard Model S Performance.

In line with our mission to make our cars increasingly affordable, 70 RWD offers the best value of any Model S released to date, $5,000 less than the current lowest priced Model S with all the current standard equipment. Model S 70 RWD starts at $70,000.

Here are a few examples of what a customer can now order: