Self-Drifting Electric DeLorean Does Donuts On The Track - Video 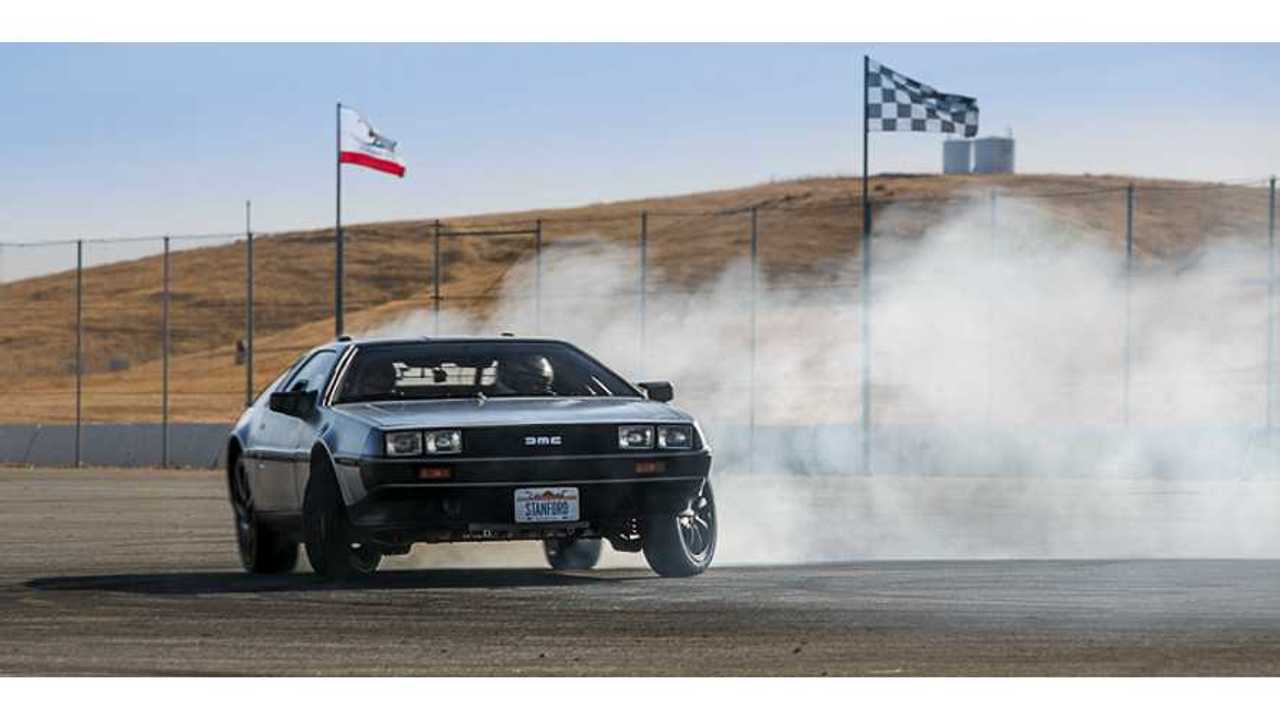 Stanford went back to the past and retrofitted a 1981 DeLorean with electric drive from Renovo Motors, under a new research project on self-driving cars.

The electric DeLorean, nicknamed MARTY – short for Multiple Actuator Research Test Bed for Yaw control, is now smart enough to drift by itself.

Stanford engineers built an autonomous DeLorean capable of stable, precise drifting at large angles in order to study how cars perform in extreme situations, which could ultimately guide the development of autonomous safety protocols.

Stanford engineers built an autonomous DeLorean capable of stable, precise drifting at large angles in order to study how cars perform in extreme situations, which could ultimately guide the development of autonomous safety protocols.

If you're going to build an autonomous, electric, drifting automotive research vehicle, why not do it with some style?

That was the thinking of Chris Gerdes, a professor of mechanical engineering, when he and his students at Stanford decided to transform a vintage 1981 DeLorean into their newest high-performance test bed for researching the physical limits of autonomous driving.

Today, alongside partners Revs Program at Stanford and Renovo Motors, the team unveiled the latest addition to Stanford's research fleet. Nicknamed MARTY – short for Multiple Actuator Research Test bed for Yaw control – the car is already proving to be an excellent vehicle for student-driven research.

"We want to design automated vehicles that can take any action necessary to avoid an accident," Gerdes said. "The laws of physics will limit what the car can do, but we think the software should be capable of any possible maneuver within those limits. MARTY is another step in this direction, thanks to the passion and hard work of our students. Stanford builds great research by building great researchers."

In addition to paying homage to the movie, Back to the Future, the name MARTY provides insight to the types of research to be carried out by the team, which has been driven primarily by Jonathan Goh, a mechanical engineering graduate student in Gerdes' Dynamic Design Lab (DDL).

Electronic stability control, or ESC, is a feature in most modern cars that ensures that the car stays within the boundaries of stable handling by, for example, applying brakes to certain wheels or even cutting engine power when needed.

"In our work developing autonomous driving algorithms, we've found that sometimes you need to sacrifice stability to turn sharply and avoid accidents," Gerdes said. "The very best rally car drivers do this all this time, sacrificing stability so they can use all of the car's capabilities to avoid obstacles and negotiate tight turns at speed. Their confidence in their ability to control the car opens up new possibilities for the car's motion. Current control systems designed to assist a human driver, however, don't allow this sort of maneuvering. We think that it is important to open up this design space to develop fully automated cars that are as safe as possible."

One of the lab's central paradigms is that autonomous cars must be able to handle all operating regimes, not just the simple one imposed by ESC. Learning how to program a car like MARTY to autonomously make the decision to trade the easiness of stability in order to drive with the fluidity and precision of a professional driver is at the heart of the lab's research into figuring out how to use all of a car's capabilities to create self-driving systems that will control the car more safely in all circumstances.

"When you watch a pro driver drift a car, you think to yourself that this person really knows how to precisely control the path and angle of the car, despite how different it is from normal driving," Goh said. "The wheels are pointed to the left even though the car is turning right, and you have to very quickly coordinate the throttle and steering in order to keep the car from spinning out or going the wrong way. Autonomous cars need to learn from this in order to truly be as good as the best drivers out there."

Eventually, the car will be taught to race around a track utilizing this drifting technique to negotiate tight turns around obstacles when required. Already the car can autonomously lock itself into a continuous, precisely circular doughnut at a large drift angle, a significant feat of controls engineering accomplished by Goh. This is the first step on the path to a self-driving car that can deal with even the most extreme of situations.

"The sublime awesomeness of riding in a DeLorean that does perfect, smoke-filled doughnuts by itself is a mind-bending experience that helps you appreciate that we really are living in the future," Goh said.

MARTY was built in collaboration with Renovo Motors, an automotive start-up based in Silicon Valley that specializes in building advanced electric vehicle technology. Working closely together gave the Stanford team early access to a brand new platform derived from Renovo's electric supercar that delivers 4,000 pound-feet from on-motor gearboxes to the rear wheels in a fraction of a second – allowing precise control of the forces required to drift.

Because the systems are all managed by a central API, the integration process was very rapid and Goh and his colleagues were able to get the car back on the road just a few months after pulling the original gasoline engine.

"Stanford is a world leader in autonomous vehicle research, so partnering with them is an amazing opportunity. Having brilliant, hard-working students embedded here in our facility, conducting research and collaborating on MARTY, is a great experience," said Christopher Heiser, CEO and co-founder of Renovo Motors. "Using our platform, the team built a working version of MARTY in a matter of months and moved into research very quickly after that. I think we're demonstrating how collaboration between Silicon Valley and universities can really work."

By partnering with Renovo and leveraging their expertise, Gerdes said his students were able to focus on the subsystems and algorithms most important to the research goals. "The project moved quickly, and we were able to achieve real research results of our autonomous algorithms on MARTY's very first test," Gerdes said.

While Goh has been the primary student in charge of getting MARTY up and running, several other students have since joined the project. Shannon McClintock, MS '15, was instrumental in disassembling and upgrading the DeLorean's frame and suspension, while Phill Giliver, '17, designed a roll cage to greatly improve safety and torsional rigidity. Wyles Vance, MS '14, and Arni Lehto, MS '14, designed and welded frame upgrades for the car. Mike Carter and Tushar Goel, both graduate students, recently joined the project and have helped design and build upgraded steering systems. The hard drifts these students execute during research chew up tires, but Bridgestone has offered to provide fresh tires throughout the project.

One of Gerdes' ultimate goals for MARTY is to drift alongside another car steered by a professional driver. This is common in motorsport competitions, where one driver tries to best the other's maneuvers, all while anticipating each other's movements to avoid collisions. To Gerdes, the challenges of drifting have many parallels in developing robust automated vehicles for everyday driving.

"A drift competition is the perfect blend of our two most important research questions – how to control the car precisely and how to design automated vehicles that interact with humans," Gerdes said. "While we aren't picturing a future where every car produces clouds of white tire smoke during the daily commute, we do want automated vehicles that can decipher the subtle cues drivers give when driving and incorporate this feedback when planning motion.  Drifting is a way to study these larger questions, with style."