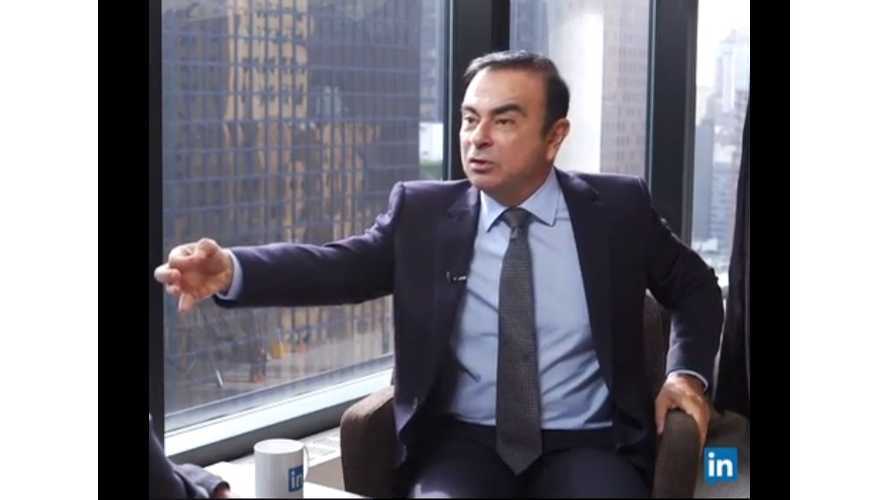 Wait Mr. Ghosn? Who Is The Best Battery Maker Again?

A lot of waves have been made lately after Nissan CEO Carlos Ghosn made some remarks about the expanding capacity of future batteries to be found inside the next generation Nissan LEAF, and the company's potential tie-up on that project with South Korean battery maker LG Chem.

Nissan Currently Has Full Service Battery Production Facilities For The LEAF In Japan, the US, And In In The UK

Specifically Ghosn said the following in a discussion with the Wall Street Journal:

“We have opened to competition our battery business in order to make sure we have the best batteries. For the moment, we consider that the best battery maker is LG.”

Nissan, with the largest automotive lithium battery manufacturing base in the world, operating out of 3 continents is saying LG is the best?

And on LG Chem (or any battery supplier) for the future, longer range Nissan LEAF (gen 2):

“There is no guarantee for anybody that you’re going to get the business without performance."

Taking the comments at face value, it appears Carlos Ghosn is saying that the "best battery maker" is LG over Nissan's own in-house battery company it owns with NEC - the Automotive Energy Supply Corp, or AESC.

We take the quote another way, that Nissan is saying that LG Chem is the best battery maker outside the company's own internal supply chain in Japan, the UK and the United States.

Nissan's strategic partner Renault, of which Mr. Ghosn is also CEO, already has a deep working relationship with LG Chem to help ease the demands of battery production in Europe.  The battery maker supplies the lithium cells found inside the Renault Zoe and Twizy.

And about a year ago, Nissan put out word that they were looking for a 3rd party battery maker to bring on addition capacity for the next generation LEAF.  Ever since then, strongly worded hints around that process have pointed solely to LG Chem, and the potential for a joint production agreement between the battery maker and AESC .

Additionally, LG Chem and Renault signed a 'memorandum of understanding' in May of 2014 to jointly develop next generation lithium-ion battery for electric cars, so the Alliance is more that comfortable with LG Chem's cells, of which are likely to be near-identical to that of the next generation of cells from AESC.

Nissan's Smyrna, TN Plant - Couldn't Shutter US Battery Production Even If They Wanted To...well, they could pay off that ATVML loan first, then do it, but that seems unlikely

We see this week's quotes from the Nissan CEO as an informal confirmation that LG Chem will indeed be a supplier of cells and components for the next generation LEAF alongside AESC.

The only question now is where Nissan might be looking to scale back and/or share production responsibilities.

Nissan USA has stated that the US plant is not a consideration for any drastic change - and would be off limits regardless due to the terms of a loan agreement with the United States government.

Given the deep relationship via the Renault Alliance already in place, Europe would seem to be a likely candidate to see the most change in battery supply chain for the next generation Nissan LEAF arriving in 2017.

Nissan currently has battery productions facilities in the US, Japan and the UK.