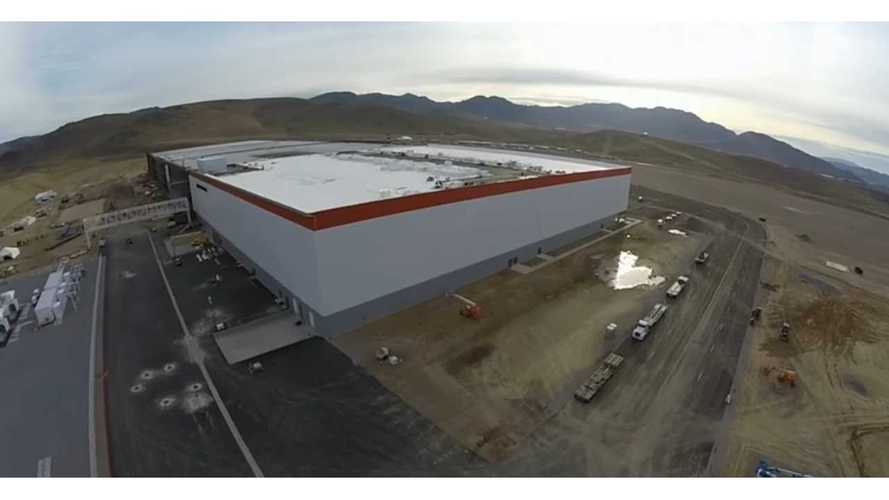 Last week there was an altercation at Tesla's Gigafactory in Reno, Nevada.  Specifically detailed in a Tesla blog post and detailed by the Reno Gazette-Journal.

This was the story at the time (full details):

"Two employees and a company vehicle for the Gazette-Journal trespassed onto the Gigafactory property Friday morning, and that illegal action ultimately resulted in a couple Tesla employees being struck with a Jeep (in separate incidents) driven by one of the Gazette-Journal’s photographers while trying to flee from security.  Another journalist was also in the vehicle."

The end result was one of the Gazette-Journal's photographers, Andy Barron, being booked on a charge of battery with a deadly weapon according to Storey County Sheriff Gerald Antinoro.  Reno Gazette-Journal’s Publisher John Maher made a brief statement on the incident at the time saying, “We take this situation very seriously and it is under investigation at this time,” and added nothing further.

Today, via RGJ's lawyer Scott Glogovac in a letter sent to Tesla, we have a different version of what happened after the trespassing occurred.

“This portrayal is scandalous and could not be further from the truth," Glogovac said of Tesla's version of events (which you can find at the bottom of this article) via the Reno Gazette-Journal.

Mr. Glogovac's letter stated that what actually happened that day, was that Tesla security guards rammed the Reno Gazette-Journal's Jeep with an ATV, then smashed out the driver's side window with a rock and cut Mr. Barron (the photographer) from his seat belt before shoving him to the ground.  This appears to be turning into a bit of a "he said, she said" situation.

"The purpose of the letter was to complete the picture of everything that happened out there on Oct. 9 and make sure Tesla is aware of the potential claims being made by Reno Gazette-Journal."

The attorney also demanded for Tesla stop "mischaracterizing the altercation" and said the newspaper is considering whether to pursue both criminal and civil claims.

RGJ's lawyer does acknowledge the trespass but says the end result was unjustified.

“Tesla has already (claimed) that the RGJ employees trespassed on Tesla property, but even if they trespassed, that didn’t give Tesla the right to attempt to detain or apprehend the employees in the manner it did: smashing a window, brandishing a knife, physically manhandling the photographer.”

Update: A Tesla spokesperson has responded to this new take on the events from the 9th:

“It’s disappointing to see that instead of taking appropriate action and investigating this serious incident as RGJ stated they would, RGJ has instead employed outside counsel to leak threatening letters to the press.  The letter seems designed to condone repeated trespassing and attack victims for seeking to stop the attack on them. We will not stand for assaults on our employees and are working with law enforcement to investigate this incident and ensure that those responsible are brought to justice.”

The Gazette-Journal further details the incident's events, saying that Barron and Reno Rebirth reporter Jason Hidalgo, had parked their Jeep in a publically accessible area, then "walked up an old road to a ridge overlooking the Gigafactory construction site".   A Tesla security guard noticed the pair and demands they relinquish their cameras.

Without saying what transpired at that point of the conversation, the lawyer's letter says the two RGJ "peacefully walking back to their vehicle", at which point the Jeep was blocked by a second Tesla security guard and his Jeep.  Barron looked to pull around the ATV, but the Tesla security guard  “began ramming the side of the RGJ vehicle before pulling in front of it and forcing it to a stop.”

Glogovac then says the two were "descended upon" by security, with one guard jumping on the hood of the Jeep, while another broke the driver's side window with a rock.

“A knife was then displayed by one of those individuals, who reached the knife through the broken window and, near the head of the RGJ driver, severed the driver’s side seatbelt,” Glogovac said.

From that point, the guard put Barron “face-first in the dirt with a knee or foot in his back."

RGJ's lawyer says the Reno Gazette-Journal is considering whether or not to pursue criminal assault and battery charges against the security guard, and thinks the two journalists themselves should pursue civil damage claims against Tesla.

“If the hard hat wearing individuals were, as Tesla has represented, Tesla security guards, those individuals were the lawless renegades, not the RGJ staffers,” Glogovac said.

We aren't sure how the exact events can ever be determined between the two parties (short of video surveillance), but we are beginning to suspect the truth lies somewhere in between after hearing both accounts.  But first and foremost lesson?  Don't knowingly trespass - bad things can happen.

Tesla's account of the incident can be found in the below statement posted last week:

Last Friday at approximately 11:50 am, a Tesla safety manager received a complaint about two trespassers taking pictures at the Gigafactory. The Tesla employee requested assistance and the Storey County Sheriff’s department was alerted.

After locating the two trespassers, the Tesla employee approached them. He asked their names and notified them that they were trespassing on Tesla property. They refused to provide their names, despite the Reno Gazette Journal (“RGJ”) ID credentials hanging from their pockets. They also denied that they were trespassing even though they had climbed through a fence designated with “private property” signs.

The vehicle belonging to the two trespassers was a Jeep marked with RGJ decals on both doors. The two individuals were later identified as RGJ employees.

The two RGJ employees and the Tesla employee were then met at the Jeep by a second safety manager at the Gigafactory. The two Gigafactory safety managers asked the RGJ employees to wait before departing, as security management and the Sheriff’s Department were en route to the scene. Disregarding this request, the RGJ employees entered the Jeep. As the Tesla employee attempted to record the license plate number on the rear bumper, the driver put it in reverse and accelerated into the Tesla employee, knocking him over, causing him to sustain a blow to the left hip, an approximate 2” bleeding laceration to his right forearm, a 3” bleeding laceration to his upper arm, and scrapes on both palms.

As the RGJ employees fled the scene, their Jeep struck the ATV that carried the two safety managers. When one of the safety managers dismounted the ATV and approached the Jeep, the driver of the Jeep accelerated into him, striking him in the waist.

Once the Sheriff’s Department arrived on the scene, they arrested one of the RGJ employees for two counts of felony assault with a deadly weapon and advised that both will be charged with trespassing.

We appreciate the interest in the Gigafactory, but the repeated acts of trespassing, including by those working for the RGJ, is illegal, dangerous and needs to stop. In particular, we will not stand for assaults on our employees and are working with law enforcement to investigate this incident and ensure that those responsible are brought to justice.