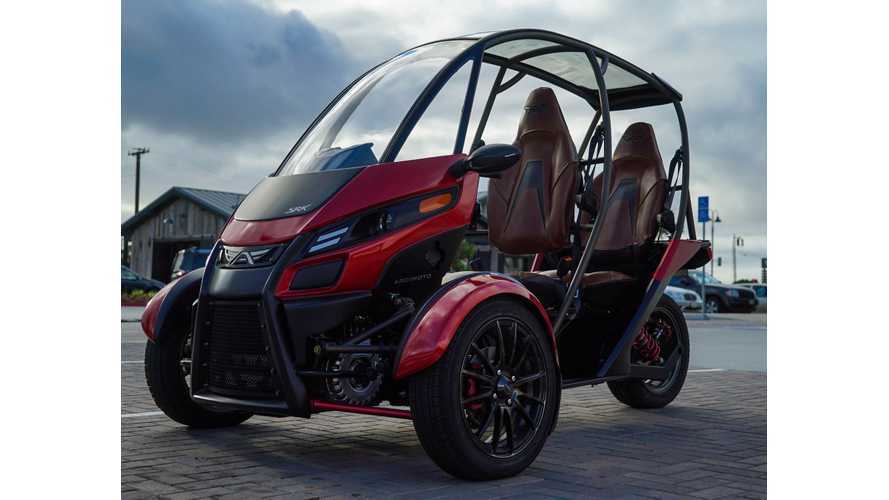 We're liking the Arcimoto SRK, come join us for a test drive!

A bit of history, Julie and I are proud to be among the early EV Pioneers ushering in electric mobility. We began in 2007 with Solar PV and in 2009 as Field Trial drivers with BMW in the pre-production prototypes, the BMW MINI-E & the BMW ActiveE, both very important vehicles in the development of the BMW i3 and BMW i8, all driving on electricity produced by harvested sunshine. We are continuing in that electrifying pioneer spirit with our exploration of various classes of electric mobility.

We're excited to to be hosting along with EVOasis, the San Diego launch event for Arcimoto this Thursday February 4th from 4pm to 7pm.

If you're in the San Diego County- Orange County area, we invite you to join us after work on Thursday for a test ride of the Arcimoto SRK & a little woodfired pizza. Just RSVP at this link if you can make it.

*Editor's note: This post also appears on Peder's blog. Check it out here.

It looks to be a fun and informative night. The CEO of Arcimoto, a Eugene Oregon based company, as well as local San Diego companies in the electric vehicle space will be present.

Why the Arcimoto SRK?

There's a huge chasm both in functionality and cost between the 50lbs electric bike and the 2600lbs BMW i3 which is one of the lightest four passenger cars on the market.

Different forms of electric mobility. Pick the one that's right for you.

Different forms of electric mobility. Pick the one that's right for you.

We're very interested in this vehicle class slotted between a 300lbs motorcycle and a 3000lbs car. At a weight of 1000lbs, the SRK is incredible efficient returning approximately 7 miles per kWh used, it's extremely fun to drive, and does not require a helmet or motorcycle license in California.

Several years ago we had a Gem E4 and although severely limited by the top speed, (25mph) the range, (20 miles) and the need to replace the lead acid batteries every three years, we loved the car. Why? Because there was a resort like quality when you were tooling around in the Gem E4. Open air, panoramic windshield, no noise and simple fun. It's the way driving along the California coast is the most enjoyable, open air and quiet, just soaking in all the sights.

This is going to be hard for some to understand, as we love our BMW i3 and BMW i8 a great deal, but the Gem E4, even with all it's shortcomings, had a certain magic and feeling about it, almost like you were on a vacation island in paradise, when you were driving it. We loved taking the Gem E4 to the beach, the lagoon, out for dinner, to a play, and to the local grocery store. Neither the i3, or the i8, nor any enclosed vehicle can give you that feeling. Crazy huh?

The Arcimoto SRK provides that same sense of openness, quiet driving pleasure while eliminating the downsides of the Gem E4 as far as range and speed. The SRK is also in my view a great platform to develop for future car share programs and for the future of autonomous driving.

First, it has three wheels and is a very stable platform, this means that in the future world of autonomous driving, the SRK will be able to come to you autonomously, or return to a nearby transit hub by itself once you have finished driving the SRK. This is simply not going to be possible with most two wheeled bikes and motorcycles.

Toyota iRoad, the MIT PEV and others are also exploring similar vehicle architecture casting their vision forward in anticipation of shared vehicles and more efficient mobility.

Second, you can park three of the Arcimoto SRK's in the space of one typical car. In our crowded cities parking is at a premium and vehicles like the SRK if widely adopted would mean that we begin to solve that problem with less real estate devoted to transportation parking.

Third, The freedom and fun of driving. There's a reason Americans are in love with motorcycles and convertibles. With the Arcimoto SRK and its open airy design language (more open air motorcycle, less closed in car,) the Arcimoto has that freedom and fun in spades. It's in this important category that the Arcimoto is superior in my view, to those who are trying to enclose and mimic a more car like form with a three wheel option.

What Arcimoto got spot on right, is keeping the openness and resort fun feel to the SRK while providing for a semi enclosed cabin that does not require a helmet or motorcycle license in Oregon or California. It offers more stability and safety than a motorcycle and if the weather's not cooperating, take a few minutes and attach the optional doors.

Cruising a scenic corridor, in our case the California coastline, the mountains and the desert of the Anza Borrego is best done in an open air vehicle for two.

Depending on your needs, your lifestyle, your vision of the future & where you want to go, you might be surprised at how much value and functionality the Arcimoto SRK can deliver.

Can't wait to drive the Arcimoto SRK this Thursday February 4th, Join us if you're in the neighborhood and want to test drive the near future of electric mobility.