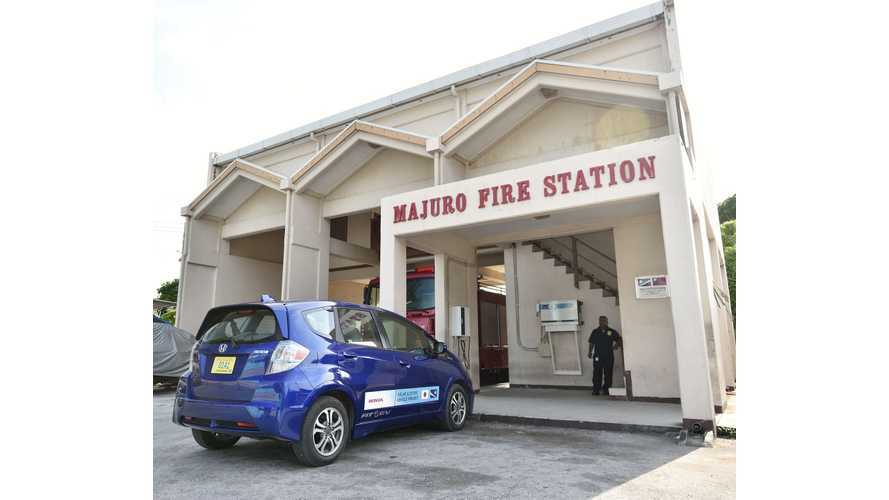 Ceremony to commemorate the start of demonstration testing

Honda, despite having all the assets to introduce compelling EVs, has been limited mostly to demonstration electric car projects - at least until a new 40 mile PHEV arrives in 2017.

One of the latest demos was launched in the Republic of the Marshall Islands, where a Honda Fit EV will be charged from Honda Power Charger (AC charging station), powered from solar array.

Introducing electric cars on all those island countries in the Pacific Ocean would be perfect, especially because of their dependence on imported energy.

As with many other island countries in the Pacific Ocean, the Republic of the Marshall Islands is almost totally dependent on imports for its energy supply, and the effort to increase energy self-sufficiency and reduce energy costs including transportation costs have been challenges facing the country. Moreover, the Marshall Islands is susceptible to the effect of rising sea levels, therefore it is critical to address the issue of global warming through the reduction of the amount of CO2 emissions.

With a support from the Japanese Ministry of Economy, Trade and Industry* Honda and Marshall Islands government will use Fit EV and Honda Power Charger and verify the possibility of widespread use of electric mobility products and installing of infrastructure for EV charging in Marshall Islands. Verification results are expected to lead to solving the issues facing the country such as energy independence.

“We are very honored that the Government of the Marshall Islands has chosen our EV and the battery charging system. We are also thankful to the Japanese government for the financial support in the implementation of this project. It is our earnest wish that this project becomes a huge success, and Honda is fully committed to cooperate and work together with the Government of the Marshall Islands towards attaining that goal and to make this project a global showcase.”