Owner's Story: Picking Up A Pre-Owned Tesla Out Of State, Texas To Florida 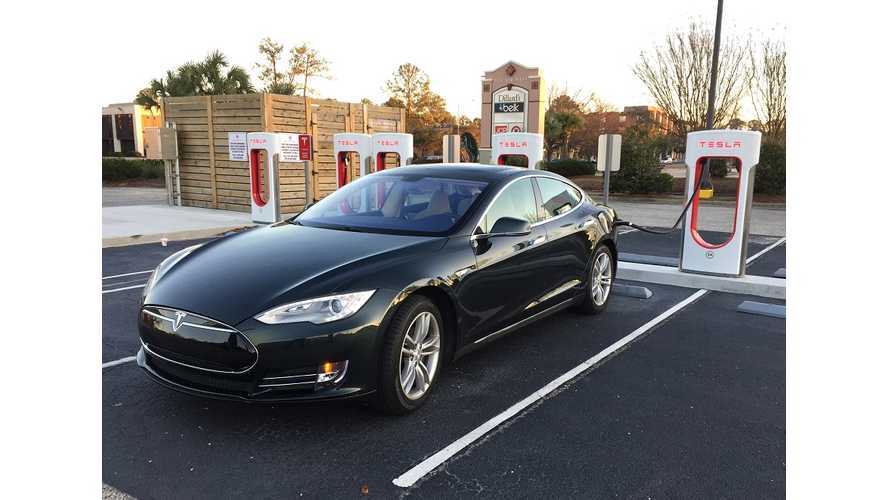 Although Tesla’s Certified Pre-Owned (CPO) program does have a few small annoyances, overall the program lives up to the expectations you would have from buying a car from Tesla. Tesla really does care for and pampers its customers whether they are buying a new car or used car. Even though the car that Tesla received may not have met Tesla’s strict CPO standards when they received it, Tesla reconditions its CPO cars to near new condition before selling them.

Editor's Note:  Our thanks to Dan for this special write-up.  When we heard of his somewhat unusual pending trip out of state to pick up a pre-owned Tesla, we couldn't help but ask for a blow-by-blow recap of the process

Since Tesla released the Model S, I have wanted one, but there was just no way that I could justify an $800+ per month car payment. However, in October 2015, Tesla released its CPO program, selling used Model S’ with a 4 year/50,000 mile warranty. The problem was that the used cars cost almost as much as the new ones. By December 2015, I began seeing high-mile Model S’ in the mid-40k’s, but most were gone within hours of when they were posted.

During the first week in January 2016, I checked Tesla’s webpage every few hours, but found nothing that met my specs. I did some research and found that some buyers were using ev-cpo.com to keep track of Tesla’s posted CPO’s. So, I signed up for a $10 subscription on the website.

On the websites historical data section, I noticed that two Model S’ sold the first week of January for under $37k that I had not even seen come up on Tesla’s website.

On January 12, I finally found a Model S that met my criteria. A pretty well loaded green S85 in Houston. All that Tesla’s website includes are stock photos and not actual pictures of the car.

Knowing that the good deals go quickly, I immediately put down the $1,000 non-refundable deposit.

My Tesla Pre-owned Advisor, Sean called me later that evening and informed me that the car wouldn’t be ready for two weeks because it was in the body shop. I was at first apprehensive about buying a used car needing body work, but Sean assured me that they were just repairing some scratches on the hood and a door ding.

I filled out all of the purchase paperwork online. The whole process was straightforward and quick. Even if you read all of the fine print, I can’t imagine that it would take more than 20 minutes to read and sign everything.

I decided to forgo the $1,000 delivery fee and plan an adventure drive back from Houston Texas to Largo Florida on Superchargers. I did my research, figured out the S85’s real world range, and mapped the Superchargers and the hotel I’d stay at along the way.

I recruited a friend to take a flight from Orlando to Houston with me and co-pilot the drive back.

I really had no idea what to expect at this point. I hadn’t even seen a picture of the most expensive car I had ever purchased, new or used. Once the car was out of the body shop, my Delivery Specialist, Whitney, sent me some pictures of the car. But, they were only pictures of the exterior of the car inside of a warehouse with poor lighting.

I was filled with a little more optimism when I received a 4-page $0.00 invoice from Tesla showing all the work they had done on the car to get it up to Tesla’s CPO standards.

Whitney was extremely helpful and didn’t get annoyed by any of my questions. She was even able to locate me a Tesla cable organizer that was sold out on Tesla’s website and had it waiting for me in Houston.

On Friday, January 22, we were off to Houston. Whitney arranged for an Uber to pick us up at the airport and take us back to the Sales Center.

On the way back to see the car, I took a peak into the Service Center and saw my first glimpse of the new Model X:

Tesla Model X And S - Together At Last

I signed a couple quick Florida car registration forms and got the tour of my new (to me) car. A Delivery Specialist had me check the car and let him know if there was anything unacceptable. The car was in pristine shape, but the Delivery Specialist noticed some "excessive wear" on the nose cone and put a service order to have it replaced. The interior was flawless and the leather looked brand new.

We input our New Orleans hotel into the navigation and it automatically located each Supercharger along the way. I had to floor it a couple times just to see what all of the fuss was about. For the second slowest car in Tesla’s fleet, it still snaps you back into your seat and is pretty shocking.

We made it to the first supercharger in Lake Charles, Louisiana without incident and ran into Buffalo Wild Wings for a quick break. My Tesla app told me we only needed to charge for 15 minutes to make it to the Baton Rouge Supercharger.

The Superchargers have no instructions and nothing on them, but a connector. You just plug the car in and walk away.

On the way to Baton Rouge, we decided to cut the heater off because it used too much power. When we got to the Supercharger, we went to the Acme Oyster House to warm up while the car charged. I figured out how to turn the heat on in the car with my Tesla app so that it would be warm using grid power when we got back on the road.

Then, we were off to New Orleans. I had done some research on where to charge in NOLA because there is no Tesla Supercharger there. I found that the Sheraton had a charger, so I booked a room there. When we arrived, I asked where to charge the car.

I was pointed to a standard home outlet. I attached the Tesla, but my app said that we were only charging at 3 miles per hour. With 141 miles to the next Supercharger in Mobile Alabama, that would take 48 hours to get enough power. So, we left and headed to the charger at the Whole Foods down the road. The charge rate there was 13 miles per hour. Better, but we would still need to charge until at least 10AM to make it to the next Supercharger.

When we arrived back at Whole Foods to pick up the car the next morning, the app told me that we had 145 miles range. That was cutting it a little too close to the 141 miles we needed to go. So, we grabbed breakfast at Whole Foods to let the car charge a little longer, then hit the road again.

We inputted my home address into the nav, and it again located all of the Superchargers along the way. Because of our low range, the nav directed us back to the Baton Rouge Supercharger, in the opposite direction of where we wanted to go. Once we realized we were heading the wrong way, we had already used 10 miles of the already tight range we had. We turned around and headed back towards Mobile. The nav kept telling us to turnaround, but we figured that if we drove conservatively, we would make it. I set the cruise control and drafted behind semis whenever possible.

Once we had 10 miles left to go, it was clear that we were going to hit 0 miles remaining before we got to the Supercharger. All of the forums that we checked said that we would have somewhere between 10 to 17 miles of range left, so we thought we probably still had enough power to make it. When we had 6 miles to go, we hit 0 miles remaining.

We made it three more miles, then the car told us it was shutting down and that we should pull over somewhere safe.

In hindsight there were a lot of things we could have done to avoid this situation. Stupidly, we were messing with the screen and ran the power down so much that the screen shut off. Without the screen, we couldn’t put the car in tow mode to tow it to the Supercharger.

Tesla roadside assistance doesn’t cover stupidity, but AAA sent a tow truck out. I called Tesla tech support to see how we could tow the car if it wasn’t in tow mode. They told me that there were auxiliary battery posts behind the nose cone that would charge enough to turn the screens back on and hopefully put the car it in tow mode.

We got the screens back up, but the car would not let us put it in tow mode. Since we could not get it in tow mode, Tesla told me that we would need to either put the car on skates or a dolly to tow the car. So, we needed a different tow truck with the right equipment.

Once the right truck arrived, we needed to jack the car up to get the dolly on the rear wheels. Tesla explained where the jack points were to the driver so that he would not damage the battery.

Five hours after we ran out of power, we finally got to the Mobile Supercharger that was only three miles away.

My co-pilot drove from Mobile to Gainesville so that I could nap whenever possible for my solo drive from Gainesville to Largo. I finally arrived home with my Model S at 7:00 AM, slipped her into the garage, and plugged her in.

I have owned over 20 new and used cars in my life, and this is hands down the most amazing car I’ve ever owned. It is fast and responsive, completely intuitive, and beautiful inside and out. Everyone that I’ve dealt with at Tesla from the sales people to the tech support has been amazing to work with. Having bought or dealt with CPO vehicles from Ford, Honda, Acura, and Toyota, I can say that Tesla’s CPO program is head and shoulders above any other car company.

Is buying a used EV from Tesla sight unseen a good idea? In a word, absolutely. Although a new Model S is not attainable in the near future, hopefully my amazingly understanding and supportive wife lets me trade my 2013 S85 for a 2015 CPO P90D with Autopilot in a couple years. If she’s lucky, maybe I’ll even let her trade the minivan in for a CPO Model X someday.