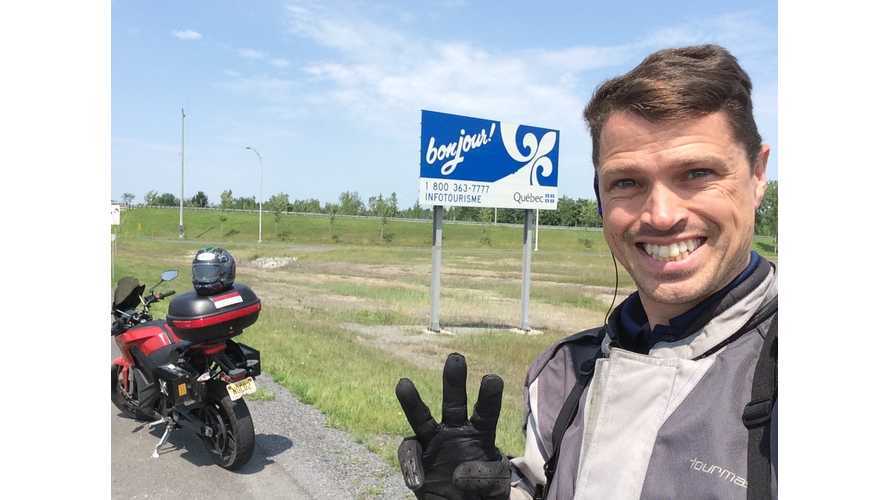 Charging in a friend's garage who drives a Honda Fit EV and a Chevy Volt.

In one summer I rode my Zero SR electric motorcycle in Mexico, the United States of America and Canada. All it took was 6,500 miles (10,000km) of riding and approximately 80 charging stops.

Today started like each of the past 30 days, wake up at 7am and get on the motorcycle for another adventure. The goal is to ride to Quebec from Albany, NY which is a 220 mile jaunt. That's a pretty easy day for me but of course there has to be a catch.

Between the first and second charging stop (there are only 2 anyway) is 103 miles through the beautiful Adirondack region of upstate NY. I was looking forward to seeing the mountains (they were beautiful!) but knew my mind would be focused on range and just getting there.

Starting at 7am I rode for an hour to the Lake George Holiday Inn where I charged at their Chargepoint station thanks to National Grid. I ate next door at a popular diner where there were lots of bikers, but was sadly disappointed at the food and the lack of real maple syrup. (I'm a New Hampshire boy and can't stand fake syrup, but that's another story.) They hotel graciously let me charge, and next time I'll eat at their restaurant.

Then the long ride to SUNY Plattsburgh began and it went pretty well. I maintained a speed of 60mph and made it with no concern at all! Yay! SUNY Plattsburgh has a Chargepoint station (yay!) within walking distance of several restaurants. I went to a sushi place and was disappointed once again. Not a good eating day for me... yet!

Dancing in Montreal with someone I just met.

The border was no problem, and I made it to Montreal in time for Swing L'ete (Summer Swing)! So I danced with several people and had a great time seeing old friends (male) and making new ones (female).

After that I went to the Museum of Science and met up with Rick, who got a Brammo Empulse R during the fire sale they had last year. It's a beautiful bike! He and his wife brought me to a food truck where I had poutine (of course!) and we had a great conversation about being early adopters and where we'd like to see electric motorcycles go in the future.

My new friend who drives a Tesla.

What an incredible day! I finally made it to the third of three countries in one road trip! At this point it feels much easier than when I first started in June. The only thing that is tricky is that one pin from my onboard charger comes out because it was loosened by some electrical arc-ing. Otherwise, I could just keep riding all summer if I didn't need to get back to my job.

Tomorrow I head home to New Jersey from Montreal, which is a 300 mile journey, but there are plenty of charging stations along the way. I wonder what adventure will happen on my final day of this epic journey.

Hanging out with my friend in his Aston Martin convertible in Montreal.