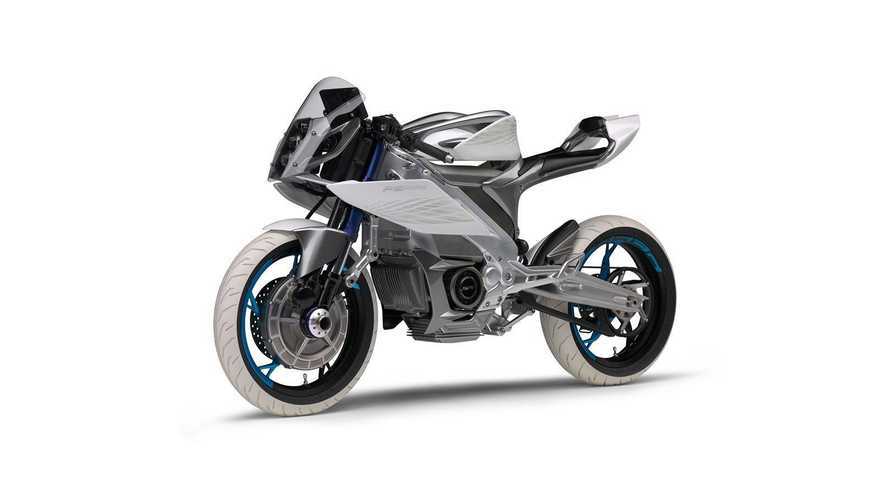 Via CNET, we hear that Yamaha is continuing its electric bike concept tease with the PES2 at the upcoming Tokyo Motor Show, opening only a few days away on October 29.  With a couple of points CNET is reporting, the Yamaha Smart Power Module, a removable pack that will allow battery swapping, and a front hub motor in addition to the rear wheel belt drive, and you've got to believe Yamaha is serious about at least trying out new ideas.

Though we've long been a fan of swappable packs, (something that doesn't make a whole lot of sense in a car, but makes perfect sense on an e-bike or scooter, and falls somewhere in the middle on a motorcycle), we're not so sure on the front hub, because, well, unsprung weight.

Sure, on a docile around-town commuter, fine, that weight isn't going to cut into your fun-meter at all, but on a sport bike?  No thank you.  Just give us a big honkin' motor on the rear, please.  Gizmag is reporting, however, Yamaha performance claims in the Class II category - 50-125cc, which puts a damper on just about any interest we have in actually owning or riding the things...  (...are we going to have to start up a Silly Bikes category to go along with our Silly Scooters?)  According to CNET this is a little less futuristic than the previous PES1 (wuuuuut?), and Yamaha apparently is sticking to it's guns about some sort of real release in 2016.

Also, don't miss the one-sided front suspension - OK, it's a concept bike, and flights of fancy is what it's all about. Especially since that poor front caliper is floating out in space somehow.  (Before you comment, yes, it looks like it's hanging off some torsion-mount thingy.  Which looks like it might not break off if you're going under about 30mph, which is the limit for street-legal silly scooters, right?  OK, now you can comment.)

Also, via Motorcycle.com we see the PED2 (Passion Electric Dirt?), a little dirt bike version.  220lbs, and outfitted to be street legal.  Apparently, they're covering the bases at this point.

Stay tuned, more details as we get 'em.  In the meantime you can watch this robot-video that gives some fairly detailed dimensions as well as scintillating speculation about the actual bikes, as only a robot-voice can do.

So, OK, you have a slick-looking mini-motorcycle in the 125cc class, and a similar dirt bike.  We're reminded to be careful we're not seeing what we want to see, rather than what's actually there.  While we want to see a Yamaha electric bike that's going to stand toe to toe with a 600cc class superbike, you know, like the Energica?  This ain't it. Can we assume these are one step above urban two-wheeler toys aimed at the healthy (primarily Japan) urban Asian market?  We suspect an emphatic "yes".
++