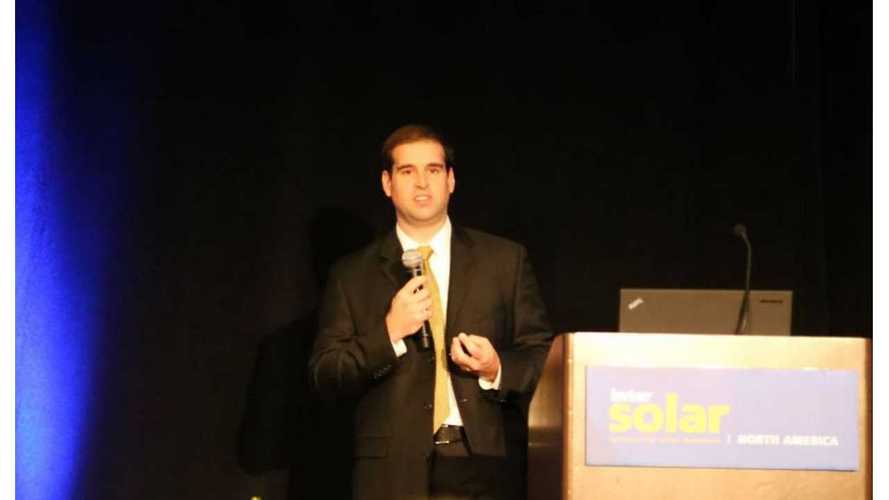 "The cost of lithium-ion batteries will quickly plummet, and that will transform transportation and electricity use," says JB Straubel.

The promises of the transformative battery is numbing at times. It seems that every month is filled with a university breakthrough that will change the industry. When Tesla’s CTO JB Straubel speaks on the state of battery technology, we pause to listen. Straubel after all is one of the key inventors of the company's battery pack technology, as well as one of the core executives involved in the company's five billion dollar battery gigafactory.

While speaking at a solar conference in San Francisco Monday night, Straubel described a future of new electricity systems from homes to transportation that will be powered with solar panels combined with batteries. He further predicted that lower battery cost will begin to transform transportation and access to electricity via solar within the next decade.

Not only have we been inundated with new technologies, so have we been covered with reports and studies on the decline in battery costs accompanied with less aggressive implementation time lines. Here is Straubel's take on the matter:

"All of this focus on battery cost and all of this focus on connectivity, and how we manage the charging times of cars and their interface to the grid, it was somewhat natural for us to expand our products into the grid market. It also helps us enable this synergy between photovoltaics, wind, and renewables in general with cars. Because our fundamental goal is how do we get sustainability into transportation. We don't want to just make cars electric. We need to link cars all the way back to where energy comes from. It has to be renewable energy to what we have to do."

Straubel on the cost of battery storage:

"I think we are at the beginning of a new cost decline curve, with a lot of similarities to what happened with photovoltaics. Almost no one today would have predicted that the price would have dropped as fast as they have with photovoltaics and storage is right at the cliff heading down that price curve. "

When it becomes cheaper to drive on battery energy than it is to drive on gasoline, electric vehicles will dominate world transportation, predicted Straubel.

Likewise, he said, that the cost of energy storage is going to fall and there is going to be much faster growth of grid energy storage than anyone expected. When the combination of batteries and solar panels become cheap enough to provide electricity for less than the cost of fossil fuel power, solar energy will become the low cost choice. “Once we get to that, there is no going back."

That’s the amazing tipping point that’s going to happen, I am quite certain, over the next 10 years,” said Straubel. Straubel called Tesla Energy a “turning point” for what Tesla represents and the products that Tesla will sell.